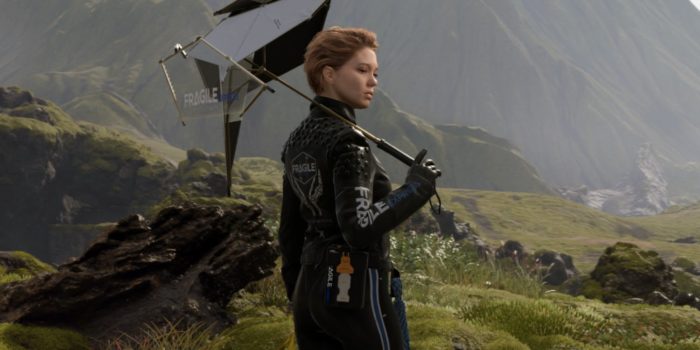 Cherished video game developer and certifiable lunatic Hideo Kojima has been hitting hard on the publicity front for his upcoming title, Death Stranding, over the last few months. His Twitter account has been littered with images, illustrations, and even the occasional meme, interspersed with abstract movie screenshots and enough Sapporo to kill a small mouse. Which isn’t necessarily a lot, but you know – a considerable amount, at least.

In a recent tweet, he made particular reference to an in-game item that you might not have given much thought to otherwise, stating that “Although the raining season is over we still need “the umbrella””, followed by a colorful range of emojis that included a rainbow, a plant and a crab (silly fellow, crabs don’t need umbrellas!!)

It’s just Kojima being his playful self, of course. But now that he has brought it to our attention, we begin to observe certain aspects of the umbrella in question. Some may ponder whether its features will affect the gameplay in any way. Others may take a close look at the details, hungry for clues in a game that has proven to be one of the most cryptic projects of the last decade.

But not us. Oh no. We have noticed that it is just an unfathomably dreadful umbrella. Like, potentially the worst umbrella we’ve ever seen.

From some angles, it might seem inoffensive, but once you have seen it in motion (skip to the 5-minute mark for some hot umbrella action), it boggles your damned mind. The most apparent thing is that its design not only makes it look broken, or maybe half-opened and stubbornly refusing to work properly, but it would also be especially poor at catching any rainfall whatsoever.

What even is this.

Notice the series of slanted panels? When held at particular angles, this not only fails to prevent rain from getting through but could actually act as a funnel that sends water directly towards its holder. Said holder (who we will call Lea for ease of use, after her voice actress, or otherwise Nancy, because I really hope they name her Nancy) is currently wielding it in such a way that it looks more like a weather vane. Does it even cover her whole head?

In a situation where it is especially rainy – a time when an umbrella would reasonably be considered very useful – a gust of wind could redirect water between each section with ease. And if she lost her grip, and it went careening towards an unsuspecting bystander? It would probably kill them, straight up. And that wouldn’t be a very cool way to die, sliced to ribbons like a rejected Mortal Kombat fatality.

As if to combat its inefficiencies, it features a clear panel of unknown nature. Like the manufacturers panicked at the last moment, and slapped that on in desperation. Is it plastic? Perspex? Glass? Space material? It’s hard to say, but it seems most likely to be a superfluous aesthetic choice. And on the note of aesthetics, we simply can’t imagine an outfit where that umbrella would be a suitable accessory. Lea’s presently rocking a futuristic biker chick kind of number, and try as she might, she’ll never make that umbrella work. Look at the doubt in her face, she knows she’s in trouble.

In a world where the protagonist returns from the dead into alternate dimensions and babies are chilling inside of Norman Reedus at all times, this umbrella is still the most confounding thing in all of Death Stranding. Someone should really sit Kojima down and explain to him the follies of his design, lest he allow poor Lea’s noggin to get soaked.