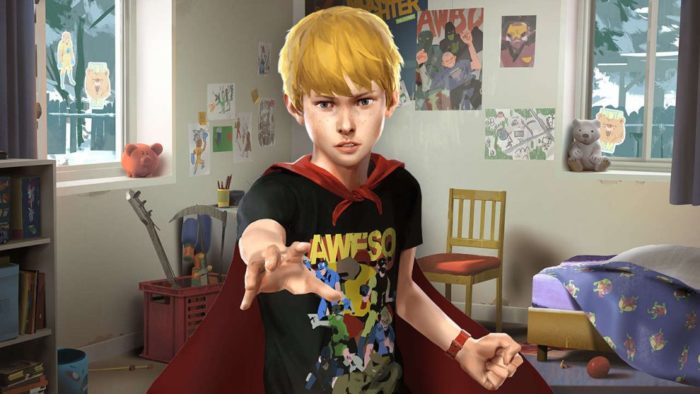 The Awesome Adventures of Captain Spirit on PlayStation 4

As always, it’s the little moments that allow the Life Is Strange universe to truly come to life. Whether it’s piecing together a tragic backstory from Chris’ imaginative playground, or letting him lie down on his dad’s bed while he listens to one of his mom’s old records, Dontnod Entertainment manages to use these smaller scenes to create a world that feels believable and relatable. Despite being a spin-off of sorts and an introduction to Life Is Strange 2, The Awesome Adventures of Captain Spirit still succeeds in drawing players into the charming and mundane nature of everyday life through a realistic portrayal of a troubled youth.

Captain Spirit’s setting is pretty simple; you’ll play as a young boy named Chris, whose mom has passed away (what is it with Life Is Strange and crappy or dead parents?), and is now living with his abusive dad, Charles. Both Chris and Charles are still dealing with the loss of their mother and wife, and Captain Spirit offers us a glimpse into how they cope with their trauma. For Charles, it’s all about the alcohol. And for Chris, he finds solace in entering a make-believe world where he adopts the superhero persona of Captain Spirit as he battles bad guys from outer space. The Awesome Adventures of Captain Spirit truly shines when it allows the player to step into the Captain’s boots and witness the imaginative creations Chris has thought up in his own mind.

Similar to Life Is Strange, the game has you wandering about Chris’ house, and you’ll get to examine objects and notes that offer a little more insight into his story. The game starts off with Charles watching a basketball game, and Chris essentially gets the day off to do whatever he wants before he and his dad go out later to buy a new Christmas tree. During this time, you’ll be presented with a few optional superhero tasks to accomplish, including the assembly of Captain Spirit’s costume and blowing up an evil snowman in the backyard.

One particular task involved Chris venturing into the utility room to turn on the water heater. But this wasn’t just any ordinary water heater, no. Instead, we got to imagine it as the dangerous Water Eater, an entity that sucked out all the heat from the water in Chris’ house. Armed with his superhero cape, Chris enters the room – now imagined as a dark and eerie arena – and he manages to tame the cruel Water Eater. Dontnod’s masterful use of quick jump cuts from one scene to another lends a sense of humor to the game, and it’s hard not to feel completely charmed by Chris’ earnestness in handling even the most mundane of chores.

It isn’t always so happy-go-lucky, though. After all, it certainly wouldn’t be a Life Is Strange game if there wasn’t at least a dark hint of something a little more sinister bubbling beneath the surface. The Awesome Adventures of Captain Spirit hits hardest when we get to learn more about the circumstances surrounding the death of Chris’ mom, thanks in no small part to the use of the game’s licensed soundtrack. If you choose to complete all of Chris’ optional superhero tasks, you’ll also unearth even more information about the mother herself and why the trauma is especially hard for Chris to deal with. Without delving into spoilers, the game excels when it manages to use Chris’ imagination to visualize his feelings over his mom’s death, and explain why his family is the way it is now. It’s definitely worth taking your time to explore the whole house and completing all the objectives; the game rewards you with a good narrative payoff for that.

Exploration might not be everyone’s thing, however, and the game can definitely feel like a slow burn if you’re not a fan of environmental puzzles. While they are simple, most of Chris’ tasks require you to scour the house and garage for specific objects that would aid him in his quest. These aren’t always immediately obvious, and it can be a little tiresome to wander back and forth aimlessly, searching for an elusive item to complete a task. This issue is only exacerbated by Chris’ painfully slow walking speed. The tasks aren’t all made equal either – some are more satisfying than others – and if you’re looking to complete everything in the game, the pacing can feel very slow until you reach the final act.

That said, it was still a pleasure to wander through Chris’ house. Dontnod’s beautiful watercolor universe has never looked better, and the little graphical improvements that have been added since Life Is Strange are noticeable. The textures look a little more crisp, the lip-sync is actually good, and all of these little improvements come together to make the world a joy to explore.

The Awesome Adventures of Captain Spirit isn’t a long game, and you’ll probably take up to three hours at most if you really want to complete everything. The story, despite being on the short side, was warm and heartbreaking at the same time, and it all comes to a head when an epic ending reveal sets up what could be an impressive and unexpected springboard for the story in Life Is Strange 2. It’s good to be back in this strange universe.