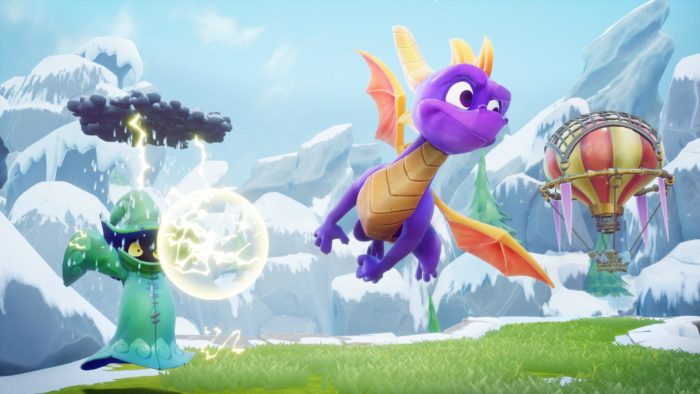 The Crash Bandicoot N’Sane Trilogy was a smash hit with fans when it released in 2017, selling over 2.5 million copies on PS4 alone. Now, Activision is looking to recapture fan’s nostalgia again with the Spyro Reignited Trilogy, and developer Toys For Bob is going to great lengths to make sure the experience stays true to Insomniac’s original games. Twinfinite recently got a look at the Spyro Reignited Trilogy, as well as some hands-on time.

Much in the same vein as Crash, Spyro’s most obvious change is the gorgeous fresh coat of point. The games have been given a sleek new art style, one that really expands on the look and feel of the originals. The first thing I noticed about the game is just how smooth everything runs. Spyro himself looks much more playful and spirited, and the game almost looks like a cartoon in motion with its animations. Toys For Bob, luckily, has the ability to take some creative freedoms, and this is especially highlighted by the designs of the various dragons you collect in the game.

Whereas the original games had three basic designs for these dragons, they now have their own unique, and vibrant, designs. For example, Nevin who’s found just before the fight with Toasty now resembles a quirky French painter, with some pretty fabulous facial hair. Additionally, his artwork and paintings now line the halls of the castle leading to Toasty, helping to give the level a little more personality and detail. Toys For Bob helped highlight even more of the detail during our demo, saying “We’ve added a lot of detail, a lot of lushness. Because of the limitations back then, the world’s very sparse, and because of that we had a lot of opportunity to fill that with things like grass that is interactive and sways as you move through it. You can see detail like up in the roofs with each individual tile.”

Toys For Bob told Twinfinite that they even ran some very early work by Insomniac, just to test the waters. In a statement they said “Insomniac’s actually not attached in any formal way, but we did reach out to them, we know a couple of the guys from over there. Early on, we did some exploration, we just wanted to understand their original intentions behind it, and we threw some ideas. Like we showed them some early versions of Spyro running in the game just to say like ‘Hey does this feel right?’ And they gave us some great feedback to work with. They were really excited and they were pushing us to take even more creative liberties. They were really positive on everything we were working on, which was great.”

This dedication to the originals is clear in more than just the aesthetic and visuals but also translates into the gameplay. This is the same Spyro you know and love from years ago, and if you’ve played the originals you’ll feel right at home. Spyro moves and controls the same way with his flight options, dash, firebreathing, and everything else. Everything feels a little smoother, and at least in our playtime the game played without a hitch.

It’s important to keep in mind that our hands-on time was only a couple levels out of three pretty massive games, but at an initial glance, at least, things look good. Don’t go into the Reignited Trilogy expecting anything astoundingly new, as similarly to the N’Sane Trilogy, this is a straight update. Still, Spyro fans should be happy to know that it looks like just as much care is going into this remaster.