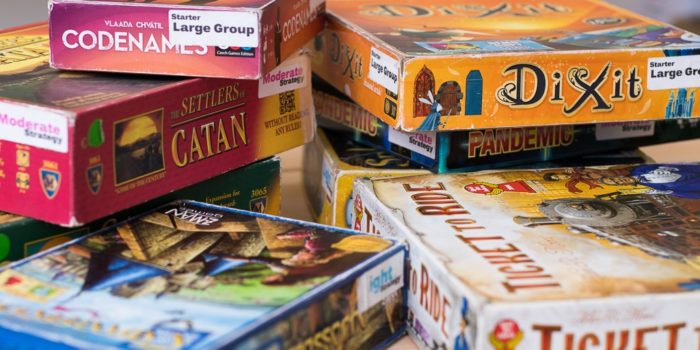 Ticket to Ride is a game that can be learned in just a few minutes making it a great game for family and friends who may not be extremely into board games. A quote found on BoardGameGeek.com sums up the accessibility to new players “The rules are simple enough to write on a train ticket – each turn you either draw more cards, claim a route, or get additional Destination Tickets,” says Ticket to Ride author, Alan R. Moon.

Ticket to Ride features a large illustrated board, 225 custom-molded train cars, and 144 cards. Collecting a myriad of different train cars and railway routes will allow players to stretch their trains across the North American map.

Ranking fifth on BoardGameGeek.com’s list of most owned games is 7 Wonders. As the leader of one of the seven great cities of the Ancient World city building, resource management, and strategy all come into play.

In 7 Wonders player’s will be collecting a series of cards that will allow for them to grow their cities, whether that be with immediate actions, or with cards that will upgrade their city over time. The goal is to collect and play six cards from the same set before your opponents, do this three times and the game is over. Drafting cards in 7 Wonders works by one player drawing seven cards, choosing one and then passing the remaining cards to an adjacent player.

7 Wonders sets itself apart from other games of a similar genre like Catan, or Dominion is its level of complexity and variety. Your strategy is heavily reliant on what cards you don’t choose just as much as the ones you do. Knowing ahead of time the cards your opponent has access to can influence the decisions you make in proceeding forward. This level of depth adds a whole new level to the tension of playing board games with friends.

Pandemic sets players in the shoes of disease control specialists as they fight against potentially world-ending viruses. On each turn, players can research cures, try to contain the pathogens, and fight for the survival of the human race in this strategy board game. Out of thousands of games, BoardGameGeek.com has it ranked as the third most owned board game.

Abilities are determined from a deck of cards that players will draw from, but beware because scattered throughout the deck are Epidemic! cards that will further the progression and intensity of the diseases players are trying to eradicate. Player cooperation is key to preventing the extinction of the human race, and one of the core components of what makes this board game so popular. Each player has a specialist with unique abilities designed to work in tandem with other specialists for maximum effectiveness.

Any fan of board games should pickup Pandemic and sit around with some friends on the next rainy night.

Carcassonne immediately differentiates itself from other games on the list, because it is a tile placement game as opposed to having a pre-determined board. Tiles can consist of roads, cities, grassland, cloisters, or a combination of those. All tiles are part of the French landscape, and players place meeple tokens on tiles they control.

Meeples can represent knights, monks, robbers, and farmers, all with different point values. Players have a limited number of Meeples so placing them in key areas for the most effective score is key to maintaining the lead. The game ends when the last tile has been revealed and placed on the board.

Carcassonne requires patience, strategy, and reading your opponents to secure a victory. Each game is different due to the randomized tile selection, which gives it a large amount of replay-ability for even the most hardcore fans and lands it at the number two spot for most owned board games.

Ranking number one as the most owned board game of all time, Catan players assume the roles of settlers attempting to build and develop towns using the resources at their disposal. Resource gathering, building, and trading are all easy to learn, and after a few rounds, almost anyone can learn the flow of the game, which makes it easy to teach new players of all ages. Catan never gets quite as insidious as Monopoly or Risk can, but keeping an eye on your opponents and trying to envision their next moves are key to being successful.

Catan is 3-4 players, but there are many expansions and variants they can up the player count to 6, making it great for groups large or small to play together. The board consists of hexagonal tiles that each have a corresponding resource on it, these tiles can be mixed and matched to create new boards every game, which will change the pace of each game without it feeling stale.

While most of Catan is determined by rolling dice to see what resources you can collect, it does require a lot of planning for where you’re going to place your hard earned settlements. You can spend earned resources on special cards that open new avenues to victory, and there’s also a strategic element to trading resources with rivals for your own benefit. It is a game that is easy to learn, but hard to master, which is great for anyone who is a huge fan of board games.