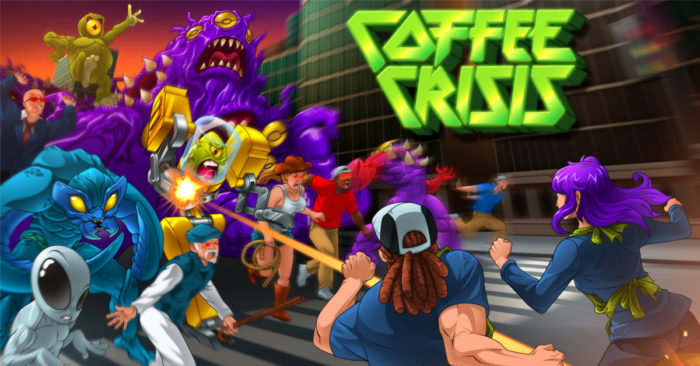 I think that my first 15 minutes with Coffee Crisis can best sum up what my overall experience with it was like. After loading the game up, I was greeted by some delightfully aggressive death metal and the determined grins of two battle-ready baristas well-equipped to smash the Earth’s good music and Wi-Fi out of the slimy, body-snatching hands of the evil invading Smurglian race. I smiled as I entered the over-the-top world of B-movie cheese that had been presented to me, only to have my mind thoroughly bombarded with conflicting information, sights and sounds. After a brief cutscene, I was thrust into the first level, which lasts all of 20 seconds before the win screen pops up giving me a password for later, and the next one begins. The next 10 minutes are a blur; the world warped and twisted around me seemingly at random, I unlocked seven achievements in that time for some reason, and then I got a game over in the following level and had to replay everything because I forgot to write down or screen-cap the level password. Just multiply that general experience several times over until an hour and a half has passed, and you basically have Coffee Crisis.

Before I get into the reasons that Coffee Crisis didn’t really win me over by the end, I’d like to start with the positives, because there is plenty to like about the game, and it’s clear that it was a personal project from developers Mega Car Studios and Higher Electric Ground. Coffee Crisis is a 2D side-scrolling beat-em-up that was originally developed as a homebrewed Sega Genesis cartridge game (which is a noble effort indeed). Many of the game’s levels were also inspired by real locations in Pittsburgh, such as PNC Park and Grandview Boulevard. And the game’s heavy metal soundtrack features original music from the Pittsburgh metal band, Greywalker.

All of these elements are positives and definitely paint this game as one made out of creative ambition. Unfortunately, though, that doesn’t make up for the other aspects of the game that are just average, annoying, or confusing.

While it is really cool that this game started life as a homebrew Sega Genesis title, that also means that I more or less have to judge it as a Sega Genesis game as well as compare it to other beat-em-ups that were around during the Genesis’ heyday. If Coffee Crisis had been released back in the late 80’s or early 90’s among other great Genesis titles like Comix Zone and Streets of Rage 2, it would probably be remembered fondly, but it definitely wouldn’t be sharing shelf space with the classics of the system.

Coffee Crisis just isn’t a very exciting or unique beat-em-up game. While I can praise the heavy metal soundtrack and occasional quality of the pixel art and sprite animation, most aspects of the game’s presentation are largely unimpressive or, at worst, confusing. The game’s art style is fine as far and 16-bit graphics go, but it isn’t really all that distinct or flashy. The color palette is heavy on blues, grays, and browns, and while the animation on sprites can look quite good, the sprites themselves look like fairly generic Sega Genesis game sprites when holding still. Certainly not terrible, but distinctly average. Coffee Crisis’ urban setting might well be based on real Pittsburgh locations, but it never translates to appearing anything other than a generic 16-bit urban setting in the game. There are a few levels towards the end of the game where the visuals and settings get more creative, but it’s too little too late by then.

Most importantly, the gameplay is more or less the standard norm for such a game with few surprises, while also being fairly repetitive and often unbalanced. The gameplay isn’t really anything we haven’t seen in a beat-em-up before. You have two playable characters that handle differently from each other – though the differences aren’t all that huge – and both of them have the same basic move-set. They can both attack using one button, hold down that same button for a charge attack, attack with running jump kicks, attack with a special move that drains some of their health, throw enemies, and use weapons. While this move-set is perfectly serviceable and functional, it lacks diversity and options when you’ll be fighting so many enemies with similar tactics the entire time, and the game can just get tedious at times because of this.

It also doesn’t help that you’ll be fighting the same enemies for nearly the entire game, with little green people, grey heads, and possessed senior citizens swelling the ranks of baddies from stage one until the credits roll. On top of that, general information in the game isn’t conveyed all that well and sometimes clashes with itself. Whether it be from the random and inconsistent spawn points for power-ups to the odd pacing in the “and then” style plot, the game just moves too fast at times for you to properly absorb anything that’s happening in front of you.

The biggest new idea that Coffee Crisis has comes in the form of ‘Modifiers,’ which are assorted effects in the game meant to either help or inhibit your progress. These can do anything from removing the color from your vision, to nuking the screen with bald eagles, or deadly cowgirls. The modifiers occur in a set number at random during every “Finish Them!” segment where you’re made to fight off a huge ambush of enemies, and usually have a major effect on how the game plays, if only for a limited time. Modifiers even have some neat features only accessible when utilizing the game’s built-in streaming features for Mixer and Twitch, like allowing chat members to vote on what modifiers they’d like to see.

While the modifiers do create a sense of uncertainty and variety that makes every playthrough different, it can also lead to a complete reshuffling of the game’s mechanics and balance at any moment in unpredictable ways. Some modifiers make the game easier and some make the game harder, but never in a slight or subtle way in either direction. Either you get something like a screen-clearing move that can end a boss fight in 10 seconds, or something like the screen shattering or the enemies becoming borderline invisible, which makes it very difficult to even tell what’s going on. Had some of these modifiers been more along the lines of a free extra life or buffs to enemy strength or something to that effect, then maybe they’d have been less disruptive to the game’s flow. Not all the modifiers are bad, and some are fun little visual quirks or expressions of the game’s exuberant personality, but the idea could have been better executed.

With this game being ported to PC came a few technological upgrades made to the Genesis original, such as the modifiers and special support for Mixer and Twitch, but what also came with the port was an increase in enemy numbers on every screen due to greater processing power. I don’t feel that adding as many extra enemies as they did much to help the game. In most cases it makes the average visuals of a fight extremely dense and hard to make out, not to mention how aggressive enemies can be even on lower difficulty settings, and when combined together this can turn most brawls into the combat equivalent of playing Where’s Waldo in the middle of a bar fight.

On the note of visual issues, it would have probably helped if the player’s health bar and combat multiplier meter had switched places, because it can be very difficult to read your health bar tucked away in a corner the size of a postage stamp when there’s a big bright green bar right next to it that they could have probably used for that instead of noting how many hits you’ve gotten in. All of this culminates to produce a game that’s pretty difficult, but maybe not for the right reasons. Additionally, similar numbers of enemies appear whether you play the game in single player or co-op, and on higher difficulties, there are even more enemies that hit even harder than before, so if you were looking for a beatdown then you’ve found one.

I can’t say that Coffee Crisis is a bad game. It’s just messy, and a whole lot less than the sum of its parts. A game about baristas fighting off an alien race from stealing all of Earth’s good music and the internet backed by an authentic death metal soundtrack should have no right to be as boilerplate average as Coffee Crisis is. Nothing about its gameplay is particularly exceptional or really that good, and the new ideas that it brings to the table do help to make things more interesting, but mostly just serve to randomly spike the game’s challenge one way or the other rather than enhance the gameplay.

Though I spent a lot of this review highlighting what wasn’t all that good about the game, I will still say I had some fun with it, but just not enough for me to really call it much more than average when considering all its issues. I can recommend Coffee Crisis to people looking for a cheap game to have fun with, as well as rabid beat-em-up enthusiasts and dedicated retro collectors, but not too many people outside of those niches.

In the end, though Nick and Ashley seem like cool guys, I prefer my coffee with a little less crisis.