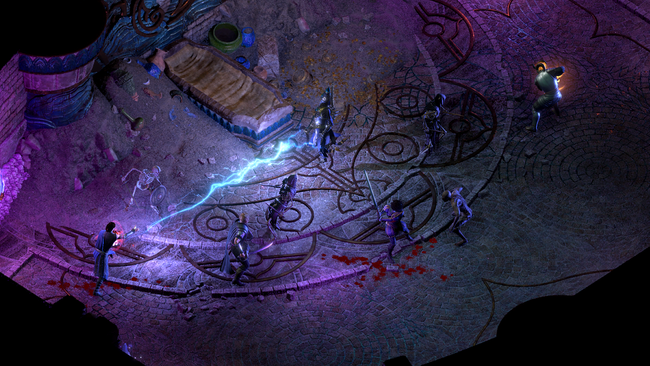 Pillars of Eternity II: Deadfire marks my return to the isometric-RPG genre that has been a long, long, time coming.  I played the original Baldur’s Gate games, and later on dabbled with Dungeon’s Siege, but for no particular reason, I drifted away from the genre. Not having a gaming PC at the time of the first Pillars of Eternity game disqualified me from experiencing that in a timely manner; but here I am now with a gaming PC, a job that lets me review games, and the opportunity to take on the sequel to a game that earned such universal critical acclaim.

Pillars of Eternity II: Deadfire picks up where the last game leaves off. Some time has passed, but it’s a direct continuation of that story and the major choices that you made carry over. While the game does an admirable job of explaining its predecessor’s narrative and providing tooltips that clarify various phrases specific to the Pillars universe, there’s no doubt that fully comprehending the backstory is a daunting undertaking. Having read several long plot summaries, I felt I had the gist of the plot, albeit not a complete grasp of everything that had happened. There’s a great deal to take in, and so deeply intertwined is Pillars’ lore with its overarching plot that it’s not exactly what you’d call accessible for newcomers.

Yet this culture shock is only so pronounced due to the astonishing level of detail that has been poured into Pillars of Eternity II: Deadfire. Understanding the various cultures, major players, and history of its game world aren’t just small anecdotes – they’re vital pieces of information that are constantly alluded to or discussed in the many dialogues that comprise its cleverly written story. As a result, even as a newcomer to the series, Pillars of Eternity II: Deadfire’s world felt truly alive to me, and from what I gathered, that was a key part of what made the first game so great too. It’s not easy to build a universe from scratch and have it be immersive and memorable, and Obsidian Entertainment deserves praise for some top-tier writing here. Eora stands right there beside other great examples of believable gaming worlds such as Mass Effect’s take on the Milky Way, The Continent in The Witcher 3, and Tamriel from The Elder Scrolls.

Considering how challenged I was as a newcomer trying catch up on Eora, I’m assuming that this bodes well for returning players that are looking forward to another lore-rich adventure. It’s worth mentioning that the game is now fully voiced, which cuts down on the need to read quite a bit (unless you’re impatient like me and read and skip ahead anyway). There’s still plenty of dialogue to read, and random events that play out like short stories which give you an opportunity to develop your character’s personality through demonstrating how they would handle certain situations.

That leads nicely into our next point: decision-making and role-playing. I’ve never played a game before that made even small choices feel so meaningful. Of course, there are major decisions that impact the story as a whole, but that’s par for the course at this point with any choice-laden game. I was more impressed with the little things – the conversations that you have with strangers and friends throughout your journey that let you play exactly the type of character that you want to play. The initial character creation is incredibly detailed. You’ll choose your class, backstory, physical and social attributes, alliances, etc. This all gives you a base character to work with, but how you handle everything from major choices to conversations with friends to the way you complete quests all work to develop your character.

Your personality is determined by how you respond to people and complete quests, and your party members, who are themselves associated with certain personality traits, are always paying close attention. Some party members want to see you be more benevolent and kind, while others like it if you’re a sarcastic jerk, and your relationship with them is important. And also how you treat certain non-party members will impact your standing with the game’s major factions. Unlike games that only create an illusion of choice in conversation, even Deadfire’s minor quests can branch off in radically different directions depending on how you choose to handle certain situations.

For example, I built my character as a noble paladin who understood traditional diplomacy but whose rough background made him equally streetwise. That way, whether I was dealing with highbrow upper-class types or street urchin lowlifes, I found a way to relate to them, gain their respect, and try to avoid unpleasant situations. Plus, I hoarded all my money to buy my way out of situations I couldn’t talk my way out of, too. But this is just one of the dozens of possible character builds; a different person might choose to be pious, a gritty survivalist, a lore-hound, etc. The role-playing tools in Pillars of Eternity II: Deadfire are out of this world, and for those that get truly invested in this game’s story and world, there is so much replay potential.

We arrive now though to areas of the game that I wasn’t as enamored with, and that’s the game’s combat and progression. The combat and progression are, as promised from the original game’s vision, true to the genre’s roots. You’ll play from the top-down and issue commands to your party who will do the fighting for you. You can customize how much (or little) you want to micromanage. You can create AI scripts and let the game do most of the work for you, or you can turn it all off and be in control of every fine detail in combat. At least on the normal and higher difficulties, I found it difficult to rely on the party’s AI when going up against evenly matched or harder opponents. Unless I was going to radically over-level (more on that in a second), you really need to be paying close attention to what’s going on in battle because even the common enemy can be challenging.

None of this would have been quite such a downer if everything wasn’t so cumbersome and difficult to keep track of. There are four different types of offenses and defenses that you need to be aware of that vary depending on the enemy, class and weapon. Between all of the different classes in Pillars of Eternity II: Deadfire, there are so many abilities and spells that you need to A: just remember what they even do, and B: consider what element, offense, defense, etc. that they represent so that way they are being used effectively. And, while you’re figuring this out and fumbling through the very busy action bar for each character, the enemy AI is pounding away at you uninhibited, since, you know… they are computers that know what they are doing all of the time.

This isn’t an insurmountable problem, and those that want an ultra complex and deep isometric combat system are certainly going to get it here with this game. It just requires a lot of effort, especially for someone that is either new to Pillars of Eternity like myself, or new to the genre in general and the game doesn’t do a great job of explaining things to you. You’re more or less left to figure it out. You can always turn down the difficulty, but for me at least, that’s throwing in the white flag. I have the fortitude to power through the combat, read up on the lore and immerse myself into this world, but I have to admit that it might be a lot to ask of people that have a passing interest in Pillars of Eternity II: Deadfire and decide to pick it up on a whim. It’s something that they need to know before going into it.

You can try to do quests to over-level, but you have to do a lot of them to level up and it can get to be a bit grindy. They aren’t boring at all, and I don’t want that to be misconstrued. Even the smallest side quests are delightful to play through thanks to the excellent writing and storytelling. But too often I felt as though they didn’t give me quite as much experience as I’d have liked to help push me through the main story, and that was frustrating at times. It doesn’t help that the game’s world feels so big because of how it forces you to travel everywhere, and going back and forth to wrap quests up can get annoying. There’s no fast travel here, at least not as we’ve come to know it over the years. And not only that, time is a factor too.

Most of the traversing in Pillars of Eternity II: Deadfire, takes place on the high seas surrounding the Deadfire Archipelago. You and your handful of party members can’t fully staff a ship, you need to hire people for that. So you’ll need to manage an entire crew of salty sailors to keep your ship afloat and defend it from the many pirates patrolling the seas. That includes feeding them and ensuring that their morale stays high and they don’t turn on you. You’ll need to pay them their wages and keep their stock of food and water adequate.

The ship to ship combat gave me some heavy Skies of Arcadia vibes, but here it’s taken to a new level of depth. You’ll have the ability to customize your ship(s) with fine detail, such as what type of sails, cannons, and weapons you want to use. The crew can vary from seasoned veterans to fresh faces. Newbies will have to be built up in experience, as their stats matter not only in combat but also surviving storms that you’ll eventually come across.

This also factors into the ship battles where you’ll have to consider elements such as wind, positioning, distance from your enemy, and what weapons both you and your opponent are rocking. Or, if you’re able, you can ram into them and initiate some down and dirty hand to hand pirate combat. It’s complex, but unlike the regular combat, there’s a more manageable amount of things that you need to learn before it all clicks. Whether it was navigating storms or ship battles, Pillars of Eternity II: Deadfire, really makes you feel like a ship captain. You have the final say on everything such as whether to batten down the hatches or power through a storm, and how you want to approach and position your self in a battle versus a pirate.

We’re starting to run long here, and that’s because Pillars of Eternity II: Deadfire is such a huge game that one review that wants to remain reasonably sized in terms of word length is going to have a hard time getting to everything. So let me leave you with this: Pillars of Eternity II: Deadfire rises well above the typical role-playing fare, and will provide an unforgettable experience for those that are willing to put the time to fully embrace what it is offering. Namely, deep lore and history that enrich a tale in which your character can be customized and role-played with an incredible amount of detail. That said, Obsidian Entertainment tries but ultimately comes up short on teaching or bringing up those that are not willing or have a hard time understanding all of the many intricacies required to be understood in order to play Pillars of Eternity II: Deadfire the right way. Loosening things up a little could have gone a long way to shifting this game from something that hardcore, classic role-playing game fans can’t miss, to something that everyone could enjoy.