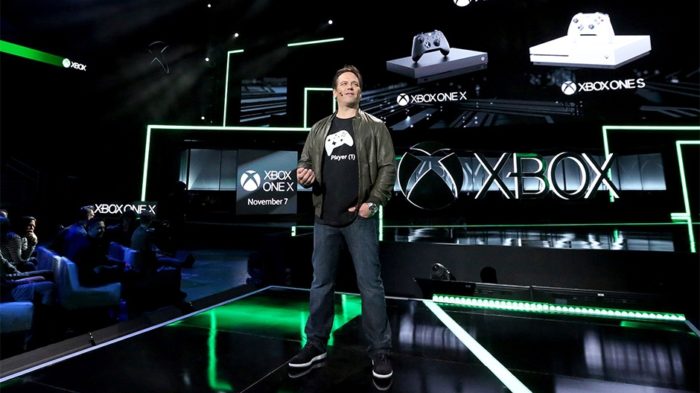 Last month, Xbox teased ‘the biggest E3 showing, ever’, something which certainly got us thinking about what that could possibly entail. It’s all building towards a noticeable shift in momentum for Microsoft, with the company clearly starting to make big strides where new IP is concerned. And that’s what they’re going to have to bring to E3 to even stand a chance at competing, let alone offering the biggest showing ever. Phil Spencer is back in the headlines today, having taken to Twitter to answer some fan questions regarding the Xbox One library, Game Pass, and the plans moving forward. He acknowledged the platform’s lack of new IP, as well as a fan’s outcry for more first-party Western-RPGs. This clear understanding of Microsoft’s shortcomings is reassuring to see, but will it translate to their E3 presentation this year?

The fact of the matter is, after a fairly lackluster 2017, Xbox is once again in danger of fading into the background this year, particular in the face of a strong first-party exclusive line-up from Sony which includes Spider-Man, Detroit: Become Human, Shadow of the Colossus, and God of War. It’s God of War in particular, which has seemingly stirred up the recent focus on Xbox’s shortcomings, with many fans lamenting the fact that they simply are not getting first-party experiences of the same quality. It’s honestly hard to argue, and an area in which Microsoft clearly needs to act.

It is very unlikely that Sony will be announcing new IP at E3 given that the company already has so much in the bag that’s heavily anticipated. Yet despite the interest in games like Ghost of Tsushima, The Last of Us Part II, and Death Stranding, Microsoft still has a big opportunity to steal some attention with a strong showing. The stage is set for Microsoft to finally wow us with a slew of new game announcements. I stress new games, and it’s essential they are indeed new IPs. It’s simply not going to be enough to rely on the usual reveals of new Halo and Gears games anymore, with recent entries in both series being great, but mostly more of the same. It’s surely Microsoft’s turn for the spotlight while Sony relies on previously announced games.

Microsoft has a hard road ahead of it, which is a shame because in terms of innovation, they’re the clear winners. The introduction of Game Pass proves this, offering players incredible value for money in a way that its competitors would never dream of.  Xbox is fast becoming a noticeably different platform to the others and is in a real position to make a comeback. Imagine how powerful the combination of new, interesting and high-quality IPs along with Game Pass would be. Imagine a game like God of War being readily available as part of a subscription on day one, players would flock to the Xbox One. As it stands though, games like Sea of Thieves just aren’t going to cut it, no matter how fun they are.

Seeing how effective this strategy has been, Microsoft needs to get in the action and start thinking about single-player games again. Phil Spencer’s recent tweets indicate that the company understands this, but can they deliver? There are some clues as to what Microsoft could have up its sleeves, with rumors of a new Fable game circulating earlier this year. While they have yet to be confirmed, they do present an interesting direction for Microsoft toward a single-player focused RPG. If they are true then they definitely add promise to the likelihood of Microsoft following Sony’s success with these types of games, something that will no doubt help their reputation immensely.

Most of all though, Microsoft needs to streamline its E3 presentation this year to be wholly games focused. It’s an area which it has been thriving in recently, with the past few E3s being more and more games and consumer-focused. They’ve clearly been making up for the infamous Xbox One reveal where they spoke more about TV and apps, slowly re-positioning the Xbox brand to be more about games and their players again. They’ve consistently had great showings over the last few years, problem is, Sony’s have simply been better.

They’ve been sticking purely to showing games in presentations which are both slick and extremely theatrical. Microsoft often has a lot of cool things to show, but gets bogged down explaining everything and adding in unnecessary smaller announcements that would be best saved for the post-show. In order to deliver this year, they need to have a streamlined presentation packed with great games, with a significant emphasis on first-party AAA titles.  Sony’s E3 will be great, there’s no doubt based on its recent track record, but it’s also likely to be rather predictable given that we know so much of what is likely to be shown. Not to discount Nintendo in all of this, of course, it’s undoubtedly going to impress by leveraging a strong first-party line-up as per usual, but the Xbox One needs to focus on retorting its main competition.

Something which Phil Spencer addressed in his recent Twitter AMA was the fact that while Xbox does occasionally see new IP coming to the platform, it is rarely followed up with a sequel. The example used was Ryse, the third-person action game set in Ancient Rome. The game didn’t set the world on fire – far from it, in fact – but it what it did do was present an intriguing new IP.

Ryse is a tricky one due to murky licensing rights but a more salient comparison is that of Sunset Overdrive. The game was adored by critics and fans alike when it launched, but was never followed up with a sequel, nor has Microsoft ever expressed any intentions of doing so (something which has been backed up by Insomniac). Sunset Overdrive oozed character, and with a couple of iterations could have become a staple in Microsoft’s arsenal. It’s clear that the problem that Spencer acknowledged here is depressingly true, it’s time for Microsoft to come out with a new game with a long-term plan, more of a franchise than an individual product. This is the only way that Microsoft can add to its dwindling supply of tent-pole titles, doing for a new series what Sony did for the likes of Horizon: Zero Dawn.

Whether or not Microsoft has the ability to deliver on the promises of new IP remains to be seen, but if they’re looking to make a splash during this year’s E3 then they’d better bring the goods. Xbox is in a great position to start rebuilding its player-base, bolstered by great, consumer-focused initiatives like Game Pass. So can Microsoft deliver this E3? If they step out onto the stage with new games, ones which they are dedicated to supporting moving forward, presented in a clear and concise manner, then absolutely. Phil Spencer’s recent comments make it seem like they are starting to focus on the right things in theory, though we will have to wait until June to find out for sure.