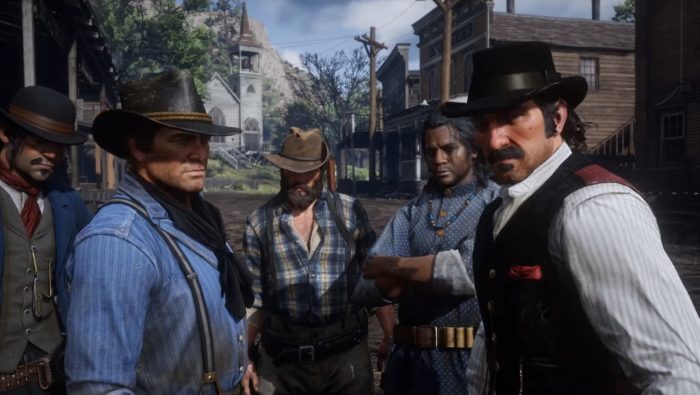 Rockstar has just dropped a brand new trailer for Red Dead Redemption 2. And while it gives us some more context on some of the story beats and the main character, we still know very little about the gameplay still. Seeing as it’s been almost eight years since the first game, we’ve had a long time to think about what we want to see in a sequel. So with that in mind, here are some features we absolutely want to see in Red Dead Redemption 2, and some we really, really don’t. Let’s begin with what we do want.

The last Red Dead Redemption featured open world gameplay which was heavily inspired by Grand Theft Auto IV. Much of the mission structure, shooting and RPG mechanics were iterations on what had featured before, so we’re hoping that Red Dead Redemption 2 follows suit and takes the best parts from Grand Theft Auto V. Specifically, we hope that they take the awesome heist mechanics demonstrated in the game’s single-player campaign. The heist missions were awesome blockbuster moments which had the player planning out and executing complex robberies, often with an element of choice thrown in.

The new Red Dead Redemption 2 trailer features a moment where the Van der Linde gang bust into a bank, faces covered and proceed to hold up the joint. Robbing a bank is awesome regardless of setting, but we think that Wild West heists definitely take the cake. Here’s hoping that Rockstar takes some of what made the heists in GTA V so special and adds some of the outlaw character that the Red Dead series is known for.

What We Want: Single-Player DLC

GTA V was undoubtedly a great game, but the absence of single-player DLC was a real letdown, especially considering how great Rockstar usually are in this area. Red Dead Redemption featured an excellent single-player expansion called Undead Nightmare. It added zombies, mythical creatures and legendary mounts into the game’s already amazing open-world. It featured its own story, hunting missions, and a multiplayer horde-mode, all of which was great.

Now I’m not saying that we need to zombify the second game, but it should absolutely have some single-player DLC. The world of Red Dead is a decidedly more serious affair than the Grand Theft Auto series, so adding in something wacky via DLC could definitely serve as a great way to keep people playing post-launch, particularly those players who don’t necessarily want to subsist purely on the game’s inevitable massive multiplayer component.

What We Want: Saloon Games

One of the surprising highlights of the first game was its saloon activities. I personally sunk countless hours into Poker, Liar’s Dice and Arm Wrestling, giving me much needed respite from the action and violence of the story missions. Red Dead Redemption 2’s world needs to be larger, denser and more interactive than its predecessor, and a great way to do so is to make its saloons a hub for a whole host of new activities. Games like The Witcher 3 and its card game Gwent have proven that players like to spend time getting immersed into an open-world by way of side activities and games, so let’s hope Red Dead redemption 2 features some cool stuff to do.

I’d be up for a full-fledged billiards mini-game, or maybe just a more realistic version of cowboy Poker. The star of the show last time around was definitely Liar’s Dice, which served as a great way to gamble and get to know NPCs which made up the world. It’s pretty likely that saloons will be a big part of the game once again, so hopefully there is plenty to make them worth visiting.

What We Want: A Solid Female Character

Something which has become perfectly clear after the last few games that Rockstar has put out is that it seriously lacks the ability to create compelling female characters. In the last Red Dead Redemption, they were mostly relegated to prostitutes and love interests, and even worse in the Grand Theft Auto series. It’s fine to suggest that a gang of Wild West outlaws would be predominantly male, but it would be great to see a character that 50% of the population could relate to.

The trailers we’ve seen so far do look promising though. With a female member of the Van der Linde gang featuring heavily, but time will tell what role she plays. We may be a ways off from seeing a playable female protagonist in a Rockstar game, but in the meantime, let’s at least present some interesting supporting characters which serve to bolster the game’s narrative.

What We Want: Battle Royale

The first game’s multiplayer was amazing when it came out. It offered up a variety of awesome game modes based around the excellent open-world environments which made up the main game. Given the success of GTA Online, it’s extremely likely that Red Dead Redemption 2’s multiplayer will have even more love and attention dedicated to it. One feature we would like to see implemented is a Battle Royale mode.

It could definitely be argued that games based solely on the premise of Battle Royale are getting a bit old at this point, but its potential as a singular game mode in a AAA experience has been largely underutilized so far. The mode would be a great for for the stripped back gunplay of Red Dead Redemption, and the idea of outrunning a circle of death while on horseback is a seriously cool prospect. There are rumors that this is already being implemented, but with no official conformation as of yet, here’s hoping.

What We Want: Plenty of Returning Characters

The latest trailer for the game gives us a glimpse at a young John Marston fresh from receiving his trademark face scars. This got us thinking about other characters we’d like to see return to the series. With Red Dead Redemption 2 being a prequel, set many years before the first game, there are some awesome possibilities to build out the world as a whole. We already know that Marston and Dutch are going to feature but there are plenty of others we want to see.

The cocaine addict Professor Harold MacDougal should definitely make a return, so should Seth Briars the grave-robber. It would be cool to see the Marston family in some form, as well as snake-oil salesman Nigel west-Dickens. Then there’s the matter of The Strange Man who repeatedly popped up in the last game, so a subtle nod to him would definitely be a great throwback.

What We Want: Dead Eye

One of the coolest features in the last game was Dead Eye. It gave the player the ability to stop time, select exactly where they wanted each shot to land, then fire away. It was always cinematic, and taking out six enemies at once always awesome. We hope that it makes a return in Red Dead Redemption 2, and with a couple of new bells and whistles too. In general, the gun-play is going to need a bit of an update, even more so than the mechanics featured in GTA V. Shooting has gotten a lot more fluid in the years since the first game launched, so players are going to expect it to feel better than it did.

Rockstar has always had a mixed output as far as gameplay is concerned, with Red Dead Redemption being a notable exception. The shooting felt slow, weighty but authentic, and translated well to a multiplayer environment. An update to the cover, aiming and inventory systems would sure be welcome, but to be honest, as long as Dead Eye is there in some form or another, it should still be a good time regardless.

What We Don’t Want: Multiple Protagonists

While they certainly borrow a lot from each other, the GTA and Red Dead games are very different from each other tonally. GTA V’s focus on three protagonists, with the ability to switch between them, largely worked because of the games more passive and comedic approach to storytelling. And while Red Dead certainly has its weirder moments, it’s inherently more grounded and gritty. This is why multiple protagonists could hamper the story in Red Dead Redemption 2 rather than bolster it. Switching the focus between multiple characters lessens the player’s connection to each one, especially in a game with such an emphasis on telling a story.

Whether or not you liked GTA V’s approach to its protagonists, it’s unlikely that it would work in the same way here. Hopefully Rockstar spends its time fleshing out the main character of Arthur Morgan, instead of splitting screen-time between an entire gang of outlaws.

What We Don’t Want: Grubby Microtransactions

Rockstar has been pretty good with implementing microtransactions into GTA V. They never hamper the experience and it’s possible to have fun without spending extra money to keep up. But with the recent shift towards games-as-a-service, it wouldn’t be out of the realm of possibility that Rockstar could get greedy. Hopefully it has seen how the likes of Star Wars Battlefront II suffered from poor loot-box implementation, and kept it in mind while building the online infrastructure for Red Dead Redemption 2.

I’m all for cosmetic upgrades like new cowboy hats, horses and weapon skins, but anything resembling an item that encourages pay to win is a big no-no. Like we mentioned previously, Rockstar has been on the good side of the microtransactions debacle which has been dominating the headlines for the past year or so, but given how we’ve seen nothing relating to the multiplayer so far, there’s still a chance of a unfortunate surprise.

What We Don’t Want: Multiplayer Interfering with the Game’s Single-Player

For Red Dead Redemption to be as big as its predecessor, it needs to modernize in a lot of ways. From the RPG mechanics to the combat systems, every little bit of the game needs to be updated and given a coat of next-gen polish. This applies to the game’s multiplayer too. But while we definitely want it to incorporate the best parts from other multiplayer experiences, there is one factor we would like it to leave behind. This is the tendency for modern games to blend the single-player and multiplayer components together. For Red Dead Redemption 2, this simply is not necessary.

Rockstar should offer a full-length, polished campaign completely separate from any multiplayer involvement. They may be tempted to include features like player invasions or a co-op story mode, given that they will likely make the most money out of the multiplayer side of things, but they should tread with caution. Experiences like Watch Dogs were completely ruined by always-online multiplayer features shoe-horned into its campaign, in a way that got very tedious very quickly. Rockstar has done a great job lately at marketing the two parts of the game as separate experiences, even releasing a separate standalone version of GTA Online. Let’s hope they employ a similar strategy with Red Dead Redemption 2.