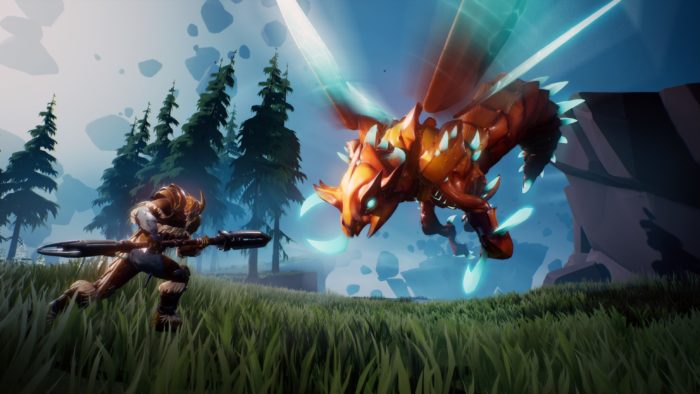 After a steady stream of brief hands-on experiences, Dauntless is finally out there for the masses. To the casual observer, it may appear like Dauntless is a free-to-play Monster Hunter clone. It’s not totally unfair to classify Dauntless in this way. Monster Hunter is the big dog in a genre that it dominates and, arguably, exists unopposed in. Anything that tries to compete with Monster Hunter this overtly is going to be compared to it. Still, we don’t call all FPS games clones of each other, and competition in the “monster hunting” genre can only be healthy. As a result, while it still needs some work, Dauntless contributes meaningfully to the genre in its own way.

Dauntless’ biggest strength is its combat. It is a risk/reward type of combat where you can choose to be patient, and slowly but safely, take down the game’s behemoths. Or if you’re skillful, you can utilize combinations and effective dodging to bring down enemies more effectively for better rewards and evaluations.

In the early hunts, you can effectively power through and bring down everything easily with zero strategy and minimal effort (like not intentionally eating every attack). In the game’s more difficult hunts, though, you’ll want to coordinate who is using what weapon (as each has different advantages and functions as classes in a way), and what the plan will be to bring the behemoth down. Focusing on individual survival is the most basic way to play, but ideally, certain party members are trying to break parts of the monster off (which reduce the behemoth’s effectiveness) while others are trying to deal heavy damage to stagger the behemoth, and provide windows of opportunity to unleash powerful combos. Behemoths can strike back and go berserk, which allows them to use new more powerful attacks and will put all but the most experienced players on the defensive for a period of time. This ebb and flow in combat works, which is great to see for a game that hangs its hat almost exclusively on its combat being enjoyable.

What is lacking and could be a lot better is the hunting and tracking phases of the game. Dauntless forces you to find your target before actually jumping into battle. It feels more like filler so that Dauntless isn’t literally just a series of boss fights. There’s no joy in looking for behemoths. It’s more or less wandering around a huge empty area until you find what you’re looking for. And, in lots of pick up groups, you have party members going rogue, getting lost and missing half of the fight. It’s dull, pointless, and is leagues behind older games like Monster Hunter and Evolve which both have way more engaging tracking phases.

This is a shame because the game’s visual style is pleasing. It’s not going to blow you away, but it has a unique look that is easy on the eyes. Phoenix Labs could do a lot more to fill up the pretty zones they have created with valuable content that makes that part of Dauntless where you’re exploring just as engaging as the combat phases.

Performance wise, the game has been stable for us. There have been some reports of poor frame rate, but we personally haven’t experienced anything too out of the ordinary outside of the occasional spike. And either way, seeing what happens with a heavier load of players is kind of the point of an open beta anyway, so it’s not something we’re too concerned about. In all of the times I’ve got to play Dauntless under ideal circumstances, the game ran great, and it’s running just fine for us now too.

The gameplay outside of combat is very familiar to Monster Hunter or any other similar game. Defeating behemoths, and breaking off pieces of them in battle will earn you currency and parts to construct new weapons and armor that you can create through vendors in the game’s hub town, Ramsford. It’s a tried and true system that isn’t any less satisfying in Dauntless as it is in any other game that does the same thing, so no complaints here. Once you get deeper in, you can fine-tune your armor with cores that are essentially modifiers that allow you to create your perfect build. The armor sets have different perks. So even if something has a better armor rating, it isn’t as simple as going with it, as slightly weaker armor might have perks that fit your play style, or work better versus certain behemoths. Complexity and player choice in games like these go a long way to making it more fun to play over and over.

The loop of doing things over and over to get stuff to do the same thing again but faster is very common. It works for a while, but it can be a challenge to keep players going consistently for the long term. For example. I’ll play games like Diablo 3 or FFXIV obsessively in spurts, until I’ve exhausted everything I want to accomplish and disappear for a while until I have a reason to return.

The key is that the game is at least fun, and there’s a reason to go back to it every once in a while. Dauntless is fun, that’s not going to be a problem. To what extent Phoenix Labs is willing to support and improve the game over the long haul will determine whether or not it has legs. For now though Dauntless is a solid PC game that can scratch that grindy game itch if you have one.