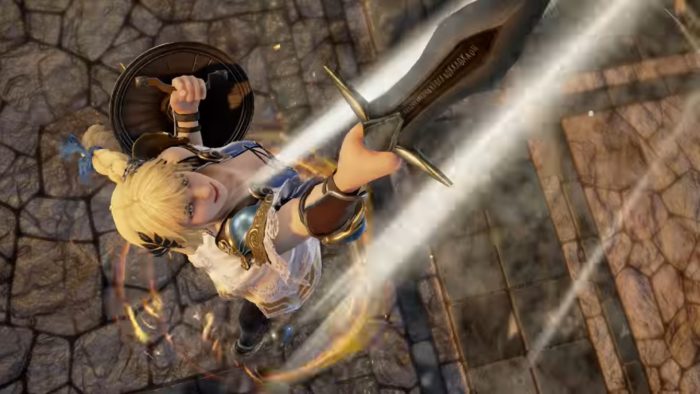 One of the pleasant surprise announcements at The Game Awards 2017 was Soulcalibur VI. Although it has stayed in headlines through character reveals such as Geralt from The Witcher, specific details about changes to combat and game modes have been few and far between. I was happy, then, to see that Soulcalibur VI was playable at PAX East this year.

Muscle memory kicked in almost instantly in the very bare-bones demo offered up at PAX East 2018. I remembered a few of my favorite Sophitia attacks and pounded the series’ veteran Mitsurugi into the ground. And, of course, because ring outs are thankfully a thing again, I delivered ol’ Mitsu’ a few slide kicks and booted him off of the stage just like old times.

It was difficult to glean anything from the demo other than, “Yep, it’s a Soulcalibur game, alright.” Because it’s newer, it obviously should be prettier, and it is. There are going to be classic characters you recognize mixed in with some new ones, bizarre guests, and maybe created characters too, if that still ends up being a thing. You’re going to strafe around on a 3D arena, try to get parrying right and fail, and run like you’re in the 50-yard dash if you see an opportunity to ring someone out, but inevitably get yourself KO’d. No complaints here, that’s what Soulcalibur is and should be. One exception that was very out in the open were new reversal edges. These are uber flashy, cinematic attacks that slow time down to allow players to time out a strike. The camera zooms in nice and tight as you deliver a slow-mo power attack that is very satisfying to land. Sadly, the demo was short, so I didn’t have enough time to properly assess how it meshes into the gameplay.

It’s way too early to cast any judgements on Soulcalibur VI, details are still really scarce and the demo on offer was just a basic three round 1v1. Still, it’s worth mentioning while the game is in development and still up for speculation, that what this game can’t be is just another Soulcalibur game. It has been six years since Soulcalibur V, which wasn’t a bad game but wasn’t particularly memorable, either. I’m afraid that if Soulcalibur VI is also forgettable – and doesn’t have the same kind of staying power of recent fighters like Tekken and Street Fighter – that this could be it for the franchise for a while.

The series is at a crossroads with two viable paths forward. It either needs to go the route of Street Fighter IV and V, and take big risks to reinvigorate its tried and true gameplay; or it needs rip a page from Mortal Kombat. Throw out all of the fluff and failed experiments, and pour 100% effort into refining the core gameplay into the best version it has ever been with all the modern conveniences fighting games would expect. Both approaches have proven to work.

Soulcalibur is near and dear to my heart, and I want to see it reach a new plateau in terms of popularity and recognition. Just doing another Soul Calibur because it’s been a few years since there’s been one isn’t going to cut it in 2018. I hope that Bandai-Namco has been paying attention and is ready to package together the best Soulcalibur we’ve ever seen and something that fighting game fans can latch onto for years to come.