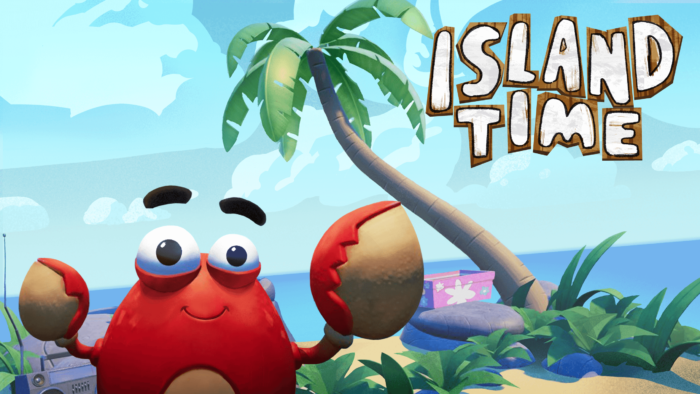 The jump scares of Resident Evil VII, the pinpoint shooting of alien spiders in Farpoint, and the twists and turns of Gran Turismo Sport are all great experiences in VR. However, the silly games – those that see you laugh and shout as you mess around in its world – can be some of the most fun. Surgeon Simulator, Keep Talking and Nobody Explodes, and Job Simulator, the latter of which was the best selling PSVR game of 2017, are all simple experiences that can be ridiculously fun.

The next game in that same mold to release is Island Time VR from Flight School. The premise is simple: you’re shipwrecked on a tiny island, with nothing but a crab called Carl to keep you company, and you need to survive for as long as you can. There’s some coconuts hanging from the tree above you, some wood and a couple pieces of flint to your right, and some fish swimming around in front of you. Starting there, you need to survive by eating any food you can get your hands on and using the items lying around on the island to scare off Steven Seagull so that he doesn’t steal your sustenance.

The gameplay loop is all about learning. There’s simple things like knocking coconuts from the tree with a stick of bamboo, then there’s working out how to catch a seagull and cook him. Most of the things you can imagine doing are possible, and you can figure out how to do it with a little trial and error. From the first moment of the game, when you’re on your boat working out how to get to the island, the game doesn’t tell you how to do anything. You need to move around and pick things up, learning how everything works over time. The first time you play, you’ll likely die in just a minute or two as you scramble to catch a fish or even light a fire, but you learn the tricks to staying alive in no time.

There’s a whole host of tools you can craft using the items on the island, some of which I still haven’t created myself, that make survival easier. As you push past the 10 minute mark, different items begin to arrive at the island in crates. At first, you’ll have no idea what they do but, as you try different things, they’ll become useful and help you stay alive longer the next time. It’s this loop of experiment, learn, and implement that makes Island Time enjoyable. Looking at the timer on your wrist, seeing how close you are to your record time and how close you are to death, makes your survival attempts more frantic and stressful, yet each time you die you want to try again to learn more and beat your high score.

It’s the possibility for the ridiculous, on top of the compelling loop, that makes you want to keep trying to survive in Island Time, however. Whether it be accidentally setting fire to yourself while trying to cook a fish, or attacking a seagull as he tries to steal your food, the eureka moments of discovering a tool are surrounded by moments of stupidity and they’re the highlight. One time, just as my life on the island was coming to a close and I had run out of wood to refresh my fire, I waved a stick at the tree to grab another coconut. Next thing I know, I whacked a seagull out of the air and he’s landed on the fire, instantly turning into a meal. I quickly leaned that there’s plenty of ways to survive beyond the traditional methods, and they can appear out of nowhere. You can also set fire to everything – yourself, the wooden crates, and the island itself. I even got a burning log far too close to Carl for my comfort or his. The balance between the challenge of survival and the silly nature of island life is almost perfect.

Carl the Crab is the game’s other highlight. Voiced by Kinda Funny’s Greg Miller, he’s little more than Island Time’s version of Wilson the volleyball, being your companion for your time on the island, making funny quips about his own time there and giving you the occasional life-saving tip. From the start, when he ushers you over to his island, he’s loud and likeable (much like Miller himself), and his presence is vital. Without his personality, which perfectly matches the tone of the game, you’d be setting fire to yourself in silence. You may think that what he has to say is nothing more than throwaway remarks, but without him by your side, the game would probably feel lifeless at times.

However, due to the game’s simple premise and single objective, don’t expect to spend a long time with it. You’ll be doing excellently if you’re alive for any longer than 15 minutes at a time and once you’re over the slapstick comedy and have become comfortable with the basics, the first five to 10 minutes of each attempt are going to feel very repetitive. You’ll be making fires, catching fish, cracking open coconuts again and again as you attempt to get close to the time at which you died previously. That could be solved by some variety being added to the early moments of each life, whether it be by scripted events in the world or through the items that are delivered to you, so that you’re not essentially playing the same thing each and every time. Imagine playing through a platformer, but you had to play level one every time you died. It would get frustrating after a while, and it can feel like that sometimes when playing Island Time.

Island Time is also another PlayStation VR game that proves that Sony needs to replace the Move Controllers with something new as soon as possible. I had more than a couple of tracking issues while playing that led to me not being able to reach a item that would keep me alive, making for a wasted attempt. It doesn’t happen all the time, and items are usually comfortably in reach, but expect a couple of issues. That shouldn’t be an issue on Vive or Oculus, however, with each device’s modern technology. Why we’re exploring virtual worlds with technology that’s nearly eight years old is beyond me.

Much like Job Simulator, Island Time balances the ridiculous with a challenging task perfectly. Although it may get repetitive once you learn the ropes, the loop of discovering new ways to survive while dealing with whatever mishaps may occur is engaging and enjoyable. Spending time on the island with your mate Carl the Crab can be great fun in VR, just don’t expect to spend a lifetime doing it.