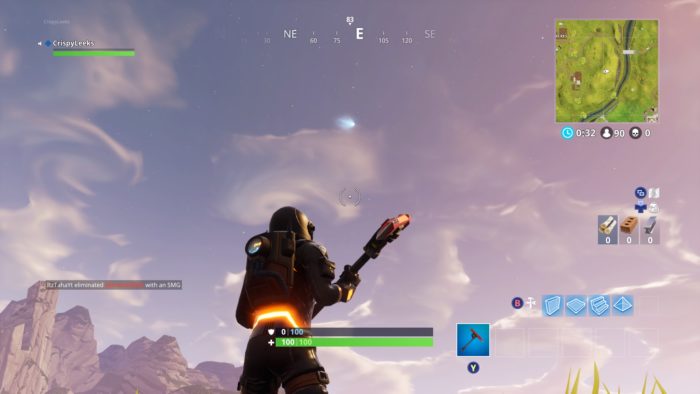 Amidst the sight of guided rockets careering down the streets of Tilted Towers, and the crashes of sniper fire, there’s something strange going on in Fortnite Battle Royale. As part of the most recent update, a glowing blue comet can now be seen speeding across the sky. It doesn’t do anything right now. It doesn’t have an impact on the standard mechanics of the game, but its presence alone has been enough to spark debates among fans over what it means and whether it signifies some big changes for the map.

Fortnite’s comet was first noticed about a week ago by Redditor Niccorazi, who pointed out its collision course with the map, or more specifically, its potential to completely change the way we know Tilted Towers for good. A location that has been a point of contention among the player base for quite some time now.

For those unaware of the controversy surrounding Tilted Towers, many Fortnite players feel that the loot-filled metropolis has messed with the flow of the game. Its central location, abundance of loot, and promise of multiple enemy encounters if you land there is enough to entice swarms of players to drop there every game. It’s fun if you want to be scrambling for a single weapon with four other players, or just like frantic battles from the very get-go, but for everyone else, the rest of the map is far quieter and your journey to the circle out of the way of the storm can be dull and uneventful.

There’s good reason that both fans and Epic Games would like to see the back of Tilted Towers, and the comet may be the gift from the gods that brings exactly that. Redditor Tactical_Pepperoni‘s theory on Tilted Towers and the comet raises some interesting points. First, there’s the whole Battle Pass being space-themed, something that Pepperoni believes could have been hinting at the comet this entire time. However, there are also some cosmetics towards the end of the Battle Pass which also seem to suggest some sort of explosion, such as a Nuke emoticon, flame stripes, and a dinosaur banner symbol. Had we maybe not seen the dinosaur symbol, it’d be easy enough to pass this off as this just being the theme for the season. The dinosaur is a strange outlier, though, but we’ll get back to it a little later.

Even without this digging and theorizing, Fortnite’s latest update certainly tries to shift players’ attention to the comet itself. As noted by ChlorophyteFTW over on the game’s official forums, telescopes pointing at the comet have been found on mountaintops across the map, and a bunch of these also have an increased number of chests spawning on top of them. Plus, doesn’t it seem a little coincidental all this is added into the game the week one of the Battle Pass challenges requires us to summit seven mountain peaks? So at this point, it’s safe to say that Epic wanted us to see the comet, and it’s more than just a subtle cosmetic Easter Egg to tie into the Battle Pass’ theme.

The comet’s significance was confirmed over the weekend when comet assets were found within the game’s source files. According to the images provided by IronRectangle, the comet is currently in its second phase, suggesting that phase one probably took place at the very start of the season and was barely visible, and that a third phase is still to come.

It’s the most recent discoveries that certainly help make the destruction of Tilted Towers seem like a strong possibility. Following the uncovering of the comet assets, further ones were uncovered by maxt123456 that seem to suggest that the comet will make impact with the world.

Then there’s the whole controller vibration bug that’s been plaguing players’ games ever since the most recent update. While it was believed that the controller vibrations were a random (and very annoying glitch), it turns out they may have contained a secret Morse code message. According to Reddit user vigilancefoetracer, the four different rumble patterns that occur at different times of the day, when the player is in a storm, and when you’re gliding down on the map at the start, when put together, spell out “SOS D5 418.” Breaking that down, the SOS part is obvious, D5 is the grid reference that Tilted Towers is in on the map, and the 418 may be hinting at April 18 as the big day of reckoning. Though, we’re not sure on that last bit, considering the season is due to end on April 30, and that seems the most logical day to make such a major change to the map.

Exactly what this comet, meteorite, space station, or whatever the encroaching blue blur in the sky is will bring when it seemingly hits Tilted Towers remains to be seen. Some believe the dinosaur (we told you it’d be back) is a sign that Tilted will be flattened and the meteorite may bring with it some prehistoric world of some sort. Others think a space-themed Crispy Crater will take Tilted’s predominant central location. And who knows, maybe, just maybe, Epic Games is taking us all for a wild ride and the comet will sail on by come the end of the season. We doubt it, but never say never, right?

Whether you’re a fan of Tilted Towers or not, the lengths Epic Games is going to to make this an interesting event for fans has to be commended. Tilted Towers could be removed as part of an update just as quickly as it arrived, but Epic appreciates it’s become a core part of Fortnite’s current formula. Though its removal may be a bitter pill to swallow for some, at least its demise would be just as memorable as the sight of swarms of people gliding in.