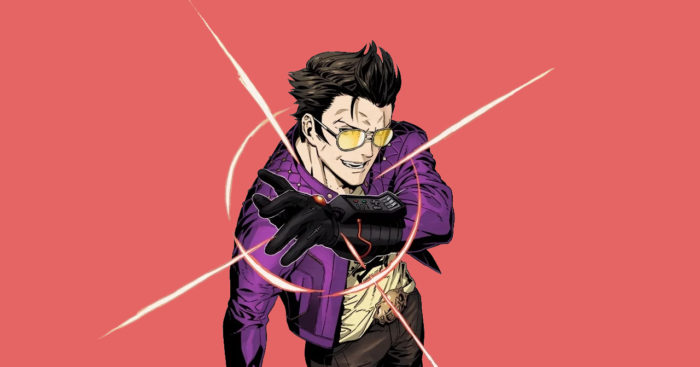 No More Heroes is one of the only Wii games I’ve consistently longed for a remaster of. It’s screaming for rebirth on the Switch, or even PlayStation 4, as No More Heroes: Heroes’ Paradise debuted on PlayStation 3. For this hardcore Suda51 fan, the rock-and-roll journey’s particular brand of insanity resonated with me and will always hold a special place in my heart. That’s why I’m anxiously awaiting the arrival of Travis Strikes Again: No More Heroes when it launches on Nintendo Switch.

But if you’re only on board because you’ve seen a trailer or two featuring the new game and you think it looks cool, you should absolutely take some time to appreciate the first two titles as well. While it’s understandable that you may want to skip them due to the fact that there aren’t ports out yet (you’d need to nab the Wii version of No More Heroes 2: Desperate Struggle and play the original on PS3 or Wii), you’d be missing out on important ties to the story. Those aspects will make Travis’s “new beginning,” as Suda51 refers to Travis Strikes Again, that much more important and rewarding.

To appreciate Travis “striking back,” you’ll want to know what No More Heroes is about to start with, which isn’t made immediately clear in the materials for the game. You’ll want to have been there throughout the bulk of his journey to really appreciate how much the character has changed from his first appearance.

No More Heroes is the tale of Travis Touchdown, an otaku who has a once-in-a-lifetime encounter with femme fatale Sylvia Christel. He’s down on his luck and needing some cash, so Sylvia tosses him a bone in the form of a contracted killer job. First, he must kill Helter Skelter, a member of the United Assassin’s Association. After taking the hit, Travis sees a lucrative opportunity in the killing business, and he’s out to make a killing as he rises to the top from rank eleven all the way to number one.

However, the other assassins certainly don’t make Travis’s rise to the top an easy task. Plus, to enter the officially sanctioned bouts, Travis must save up enough cash to cover the astronomical fees by holding down odd jobs and saving up his coins, all the while preparing for the next bloodthirsty battle. But that’s just the tip of the iceberg.

There’s an entire cache of story in both games filled with plenty of twists and turns that I won’t spoil here, but the tale of Mr. Touchdown is most definitely a memorable one. In fact, there’s an abundance of important moments during the first game that will explain exactly why the character Bad Man from Travis Strikes Back is so upset about losing his daughter, known as Bad Girl — an assassin from the first game. You might be moved to think Bad Girl (Charlotte) is an innocent little child killed as a result of Travis’s hubris, but playing through No More Heroes reveals that she was far from innocent, and probably a psychopath at that.

Travis Strikes Again also takes place several years after the events of No More Heroes 2: Desperate Struggle, so there are undoubtedly additional ties to the game’s ending. There’s the question of what happened to the aforementioned Sylvia Christel, for instance, and what role she plays now in the scheme of things following Desperate Struggle’s ending — if you haven’t played through the game, you’ll have no idea what the significance of Travis having isolated himself somewhere in the southern part of the US has to do with anything.

So before you write off both games because they’re “old” or you don’t want to go to the trouble of playing through them, take some time to experience Travis’s earlier adventures. They aren’t yet available as Switch ports (and they very well may be in the future) but they’re very much worth enjoying if you want to get the full effect of what I’d consider one of Suda51’s masterpieces. Just wait and see — they’ll come together in a way that’ll be vastly more rewarding than embarking on the new Switch iteration alone. Suda’s got something big planned, like he always does.