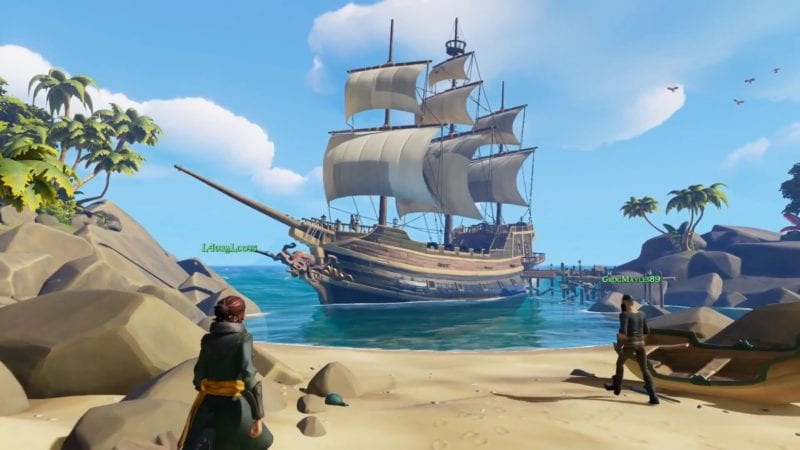 Microsoft recently announced its Game Pass service which will offer up over 100 titles as part of a subscription service. Most notable is that all future first party exclusives will be included on day one. This extends to Sea of Thieves, which will arrive on the system March 20.

This fact alone means that Xbox users can receive the full game for $9.99, or even use their free trial to play it. This is likely to boost the player count massively, something which will only make the game better, given its multiplayer focus.

Developed by Rare, Sea of Thieves is in very safe hands indeed. Rare has been developing games for over 30 years and has a real pedigree in the industry. It has produced Battletoads, Donkey Kong Country, Goldeneye, Killer Instinct, Banjo Kazooie, Perfect Dark, Conker’s Bad Fur Day, Star Fox Adventures, Diddy Kong Racing and more. The core concept behind the development of Sea of Thieves is that Rare wanted to make a game that would be just as much fun to watch as it is to play.

They also have a great working relationship with Xbox, releasing Rare Replay on the console back in 2015. There are very few studios who could pull of a wacky cooperative pirate game but Rare is definitely one of them.

If there’s one single reason why you should be stoked for Sea of Thieves, its for just how fun it is to play with friends. Sailing a giant pirate ship, bailing water out with a bucket while your buddies swordfight on the bow, awesome. Rare has packed the game with elements which make it a blast to play with friends. You can vomit into a bucket and throw it at a pal, fire another out of a cannon and sing sea shanties as an unstoppable pirate unit.

The game is perfect for short, cooperative missions, meaning it won’t require a huge investment from a whole group of friends. It’s rife for team-based hilarity, with multiple groups of players often heading for the same objective. The learning curve is super accessible too, meaning you won’t have to get too serious.

The Game is Genuinely Gorgeous

By opting for style over realism, Rare has managed to create a game with a genuinely unique and beautiful art style. The open ocean is wonderfully rendered and incredibly dynamic, putting across a sense of scale not often seen in video games. The character designs too, are awesome and really ooze with creativity. There’s a random character generator which allows players to design their own distinct look, perfect for a pirate captain.

The way the game uses lighting is also of note, with the sun’s rays bouncing and scattering off of the ocean’s surface. When things get choppy, the stormy seas look alive and frenetic, putting across a real sense of power and danger. The game’s tropical islands buzz with vibrant animal and plant life, luring the player in and daring them to explore.

As a budding Pirate, your main goal is to track down treasure chests, naturally. Sea of Thieves is full of an assortment of different chest types, from normal ones filled with gold to ones with odd special effects. It’s these ones which add an extra layer of fun to the game, as many players found out during the beta.

The Chest of a Thousand Grogs instantly makes the player drunk when they pick it up, causing them to sway from side to side while distorting their vision. There’s also the Chest of Sorrow which will occasionally start crying. This may not seem that interesting but when you factor in the fact that it produces enough water to sink a boat after a while, it definitely requires some care. You just know there’s going to be even more strange chests in the full version of the game, which is definitely something that makes us want to dive in.

Despite the extensive betas and gameplay demos the game has received, we still don’t know a whole lot. There are rumblings of a monstrous Kraken lurking in the depths as well as secret areas and loot. There’s the impression that we’ve only seen a small sliver of what the game has to offer, something which makes it all the more tantalizing.

This sense of mystery adds to the pirate experience, with it very likely that players will encounter new things with every voyage they set off on. Maybe there are ghost pirates, maybe cursed treasure, it’s anyone’s guess. Rare is keeping its cards close to its chest for a reason, and we can’t wait to find out what it is.

Rare are being suspiciously cagey in regards to end game content. What we do know is that the end goal of Sea of Thieves is to become a Legendary Captain, which is more than just a namesake. By completing quests for the game’s three factions, your reputation increases. At a certain point this will unlock the endgame content and will open up a whole new area of the map. Apparently, this high-level area was actually in the beta, though no one found it.

By finding this hidden pirate’s den, players will be able to unlock Legendary Voyages, which are, as Rare describes them, Raid-style affairs. The promise of a bespoke endgame is incredibly exciting and goes a long way to extend the game’s longevity. We’ll have to wait until launch to see exactly what all of this entails but one thing’s for sure, if you’re an Xbox owner then Sea of Thieves is definitely not to be missed.