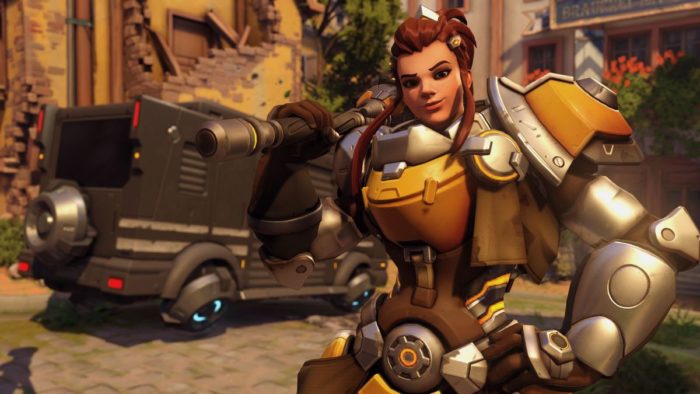 It hasn’t really felt all too long since we last got the last Overwatch hero, Moira, back at BlizzCon 2017. She’s proven to be plenty of fun, and more importantly, a hero the game actually needed. Just last week, Blizzard announced the next hero the join the fray, Support/Tank hybrid Brigitte Lindholm. Armed with a shield and a rocket flail, she seems like a step up from most of the healing-based Support heroes. However, does she have what it takes to actually to redefine and meta and end the dive composition?

First off, we’ll have to take a look at her kit and what she brings to Overwatch. Brigitte’s “main” form of healing comes from her Inspire passive ability that heals allies within a certain radius whenever she lands a hit. While this might sound similar to Lucio’s healing aura, hers only works when she’s out there dealing damage in the front lines. The passive has a rather measly healing output, making it nearly impossible to land those clutch healing moments. On top of that, 16 healing per second is hardly enough to sustain 200 HP heroes under heavy fire, much more Overwatch tanks who are at critical health.

Brigitte’s healing isn’t totally useless, as also has her Armor Pack ability that restores 150 HP and up to 75 points of decaying armor. This skill can save allies in a pinch and even sustain heroes, such as Genji and Reaper, when they’re using their ultimate abilities. Armor Pack almost sounds too good to be true, but there’s one glaring weakness: the 6-second cooldown. Brigitte pales in comparison to main Overwatch healers like Mercy, Ana, and even Moira who can dish out healing at almost any time without having to rely on their other abilities. Not to mention Armor Pack is a projectile-based skill, and there may be times when your pack arrives just a second late after your teammate dies.

What Brigitte lacks in healing skills, however, makes up for it with the other utilities in her kit. She comes with a particularly small shield that can hardly protect anyone aside from herself, but it comes with an amazing Shield Bash ability that can stun any incoming enemies. Heroes who have been dominating the Overwatch dive meta, such as Winston, Tracer, or Genji, would have a difficult time whittling down targets if she times her stun just as they jump in. Her skills are great for stunning and whittling away enemies, especially flankers, while providing some minimal healing throughout the fight. She would definitely work well with a skilled Reaper, McCree, and Junkrat, who are heroes that also excel at barring the enemy from jumping in on your team. The skill also has an incredibly gracious hitbox, meaning she’s more than likely to land a hit if the enemy’s within range.

Once stunned, she can move in for the kill with the flail or send them running away with some critical wounds. Her high durability and defensive utility also make her a sturdy enemy against tanks, and while she might not be able to 1v1 a Winston or D.Va, she can just push them away from her team with the Whip Shot.

That being said, Brigitte might not perform well in a dive team herself since it would be much more reliable to have a Zenyatta who can debuff enemies for easier kills and a Mercy who can swoop in and out of danger while actually providing some sustained healing. Not to mention she lacks mobility to keep up with the rest of her team. If anything, she would probably fit in an Overwatch deathball composition: a tightly-knit, protective team where everyone pushes together as a group. Moreover, using Rally, her ultimate ability, would grant everyone the extra armor they need to make a push and break through enemy lines without taking too much damage.

At the moment, it’s still a bit too early to say if Brigitte is the “meta changing” Overwatch hero fans have been looking for. As a healer, Brigitte might come off as more of a niche pick, particularly in a more tank-oriented group. She would possibly work well with another main healer, but only if she can push in and whack enemies to use Inspire. Nevertheless, Overwatch players shouldn’t underestimate the rest of her kit that gives her a fighting chance against certain flankers and tanks. The dive composition has been dominating the meta for the past few seasons, but we could be seeing less of it if in the near future if more players start to build their team around heroes such as Brigitte.