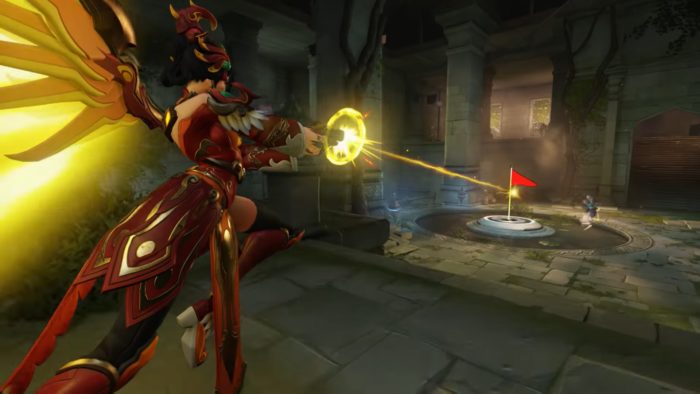 I’ll be honest, the original capture the flag mode felt like one of the most tedious, time-wasting experiences in Overwatch. When Blizzard revealed the mode last year, I was absolutely ecstatic. It’s such a welcome change of pace from typical Overwatch gameplay objectives, and while it wasn’t the PvE mode I was hoping for, it was at least something fresh and different. Blizzard deserves credit for attempting innovation, but unfortunately, I found myself sick of queuing after only a handful of matches. It was difficult trying to work around the clunky mechanics, and the constant draws after games didn’t help either. So when Blizzard announced the Overwatch Year of the Dog event and the return of capture the flag, I wasn’t all that hopeful.

Just before the event, the game director shared a developer update detailing some of the new things coming to the event – including a capture the flag overhaul. I was intrigued by these new changes but needed something more than Jeff Kaplan’s honeyed words to sway me. And so I tried the mode myself the following week and I was absolutely smitten, wholeheartedly believing that this was what capture the flag was supposed to be.

Before the Overwatch Year of the Dog event, the mode felt incredibly clunky and slow. Defense heroes were the order of the day, isolated from the meta in their own little kingdom. As a result, heading into the enemy base meant certain death if a Torbjorn or Symmetra were waiting there, turrets melting you at the ready as you attempt to stand on the flag. Even so much as a single bullet would reset the flag timer, making it frustratingly difficult to actually grab it. And if one team managed to deliver the flag back to their own base, the game was pretty much good as done. The “winning” team would usually just focus on defending their base instead of grabbing more flags since, hey, it was way easier to defend than put up with attacking again. Unfortunately, there were plenty of times when both teams wouldn’t even score a single flag, ending the game with a draw. For the most part, it just felt like a waste of time.

Blizzard has since tossed these mechanics aside for something much more streamlined, starting with removing the flag timer. As soon as I started my first match on the new map, Ayutthaya, the changes clicked instantly. Although players still have to worry about the turrets waiting for them at the enemy base, they don’t slow the game’s pace to a crawl. Team fights also feel much more engaging as they focus less on standing on the point and more on actually taking down the enemy. Both sides still need to keep an eye on their banner since there’s no use winning the fight if they didn’t capture or defend it.

Things take a particularly interesting twist, however, when somebody grabs the flag. The battle suddenly stops and it becomes an intense game of Protect the President, especially since the flag bearer has no access to their movement abilities. There’s a strong sense of urgency with the flag bearer’s vulnerability, and that really helps everyone work together. I’ve been using Mercy throughout most of my capture the flag matches, and it honestly felt amazing when I would use Valkyrie to swoop in and sustain my team as they fled from the enemy base, guns blazing.

That being said, the revamped capture the flag mode still keeps the same exhilarating feeling when you have the enemy flag yourself. Going through the main route is out of the question, so you have to rely on your map knowledge to squeeze through the hallways and corridors to avoid being hunted down. When someone has the flag, nothing else matters as long as they deliver it safely. In my case, playing Mercy in Overwatch basically places a large target on my back, so imagine the added tension of having to carry the banner back to base without Guardian Angel.

Probably the best thing about the new Overwatch capture the flag mode, however, is the sudden death. In an attempt to remove draws, Blizzard added one final fight if players tied their scores at the end of the round. In sudden death, flags move much closer to each other, and the winning team must bring at least one banner to their base. It’s basically an all-out deathmatch out there, and you’ll really have to coordinate with your team to win. The addition of sudden death is the finishing touch to the Overwatch capture the flag mode, guaranteeing that one team will be bringing home the bacon.

Players have four weeks to enjoy the Year of the Dog event, but I hope that capture the flag will stay in the arcade. The Overwatch mode is the perfect shakeup for those who start feeling burned out by the monotonous cycles in quick and competitive play.