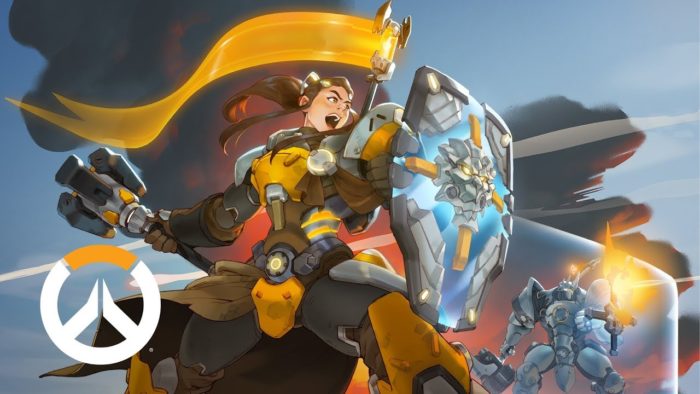 Overwatch finally revealed its teased next new hero, Brigitte Lindholm, the daughter of Torbjorn and protege/goddaughter of Reinhardt. Torbjorn allowed Reinhardt to name his daughter in return for Reinhardt leaving him alone while in the hospital after suffering an injury. The influences of both are reflected in Brigitte’s appearance and her play style in Overwatch.

Torbjorn, her mother, and Reinhardt all appear to be close friends while Brigitte is a little girl. She was inspired by the hero’s “gleaming armor” and followed in her father’s footsteps as an engineer, but instead of weapons, focused on learning how to construct and repair armor. Initially, she wanted to be like her father, but seeing how battered and bruised Reinhardt would look after battles inspired her to be more than someone who just patched people up after a fight. She would travel with Reinhardt on his adventures, despite Mercy’s reservations.

This is highlighted in the second Overwatch comic, Reinhardt: Dragon Slayer, where Brigitte expresses her concern about Reinhardt’s health.

In the animated short, Honor and Glory, she once again expresses her concern and love for godfather. She tries to talk him out of rejoining the Overwatch in order to protect him and also out of principle since Reinhardt was eventually pushed out of Overwatch to begin with because of his age. He, of course, doesn’t heed her warning.

Rather than remain on the sidelines, Brigitte learns to fight from Reinhardt and sought to combine her armor expertise with frontline fighting skills to not only support but also protect her allies (and godfather/father) in the heat of battle to prevent injuries before they happen. You can see this transformation via an official video below released by Blizzard to celebrate her release on the PTR.

Blizzard also added the following via a press release:

“The daughter of weapons designer, Torbjorn Lindholm, Brigitte was the first of his children to show an interest in mechanical engineering. Brigitte spent much of her spare time in her father’s workshop, learning the trade and honing her skills. Her aptitude for engineering mirrored that of her father’s, but Brigitte’s primary interest was in armor fabrication and defensive systems, unlike Torbjörn, who was world-renowned (and perhaps infamous) for the weapons he created.”

If you’re pumped about giving Brigitte a go, she’s available right now on the Overwatch PTR and presumably will get a full release in the near future.