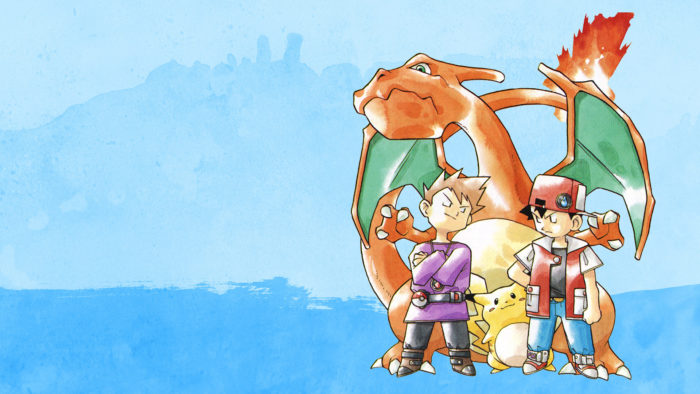 It feels gross typing that title. As though my fingers are telling a lie, forced through some kind of witchcraft to spew erroneous slander. Pokemon Red and Blue were the titles that brought the weird and wonderful pocket monsters into the world, a franchise that became so powerful, it transcended gaming. Your parents may not know Zelda. They might even be unfamiliar with Mario. But Pikachu? Everyone recognizes that guy. In a vacuum, Red and Blue are a stupendous achievement that pushed the Game Boy to its limits, cramming so much information into the tiny cartridge, and creating a boom in the handheld market that was unprecedented.

Their place in the history of gaming and pop culture are not to be denied. But there is a curious trend that goes hand in hand with their popularity that tends to skew peoples’ perception. Ask anyone whose interest in Pokemon waned after the initial rush (genwunners, if you must) – they’ll tell you that the original games were the best in the series, and nothing else came close. Sure, if you want to talk about how much a game resonated with you, then that is fair enough, but don’t let it blind you from the truth: Pokemon Red and Blue are seriously flawed games that have not aged well. The base mechanics remain as solid as ever, and have been maintained more or less throughout the franchise’s history. But to make the claim that they were the best of all? More faulty than Focus Energy.

Let’s delve in for a moment.

Back in the late 90s, RPGs on the Game Boy had typically been massively scaled back facsimiles of existing games. You didn’t play them for the quality, so much as the novelty of taking these adventures on the road with you. When Pokemon arrived, it was something of a revelation: a fully dedicated turn-based RPG that was built from the ground up solely for the handheld device, with features like link cable trading that could not be achieved on a home console at the time. We had very little else to compare it to. The typing chart was intuitive and fun, and capturing the various Pokemon added another layer of strategy. The storyline wasn’t anything grand, but it was serviceable enough; the highlight likely being Giovanni’s double life as gym leader and Team Rocket head honcho.

The actual application of the battling system had a number of flaws that limited its appeal. Move pools were shallow, with many Pokemon lumped with a whole gallery of useless attacks that made them practically unusable. Beedrill? Scrap it. Parasect? More like Pointlessect. Seaking? Fugeddabout. Though you had 151 monsters at your disposal, most people opted for some combination of the same usual suspects. This was because other Pokemon were given an incredible selection of techniques that made them almighty; Alakazam is a prime example of a combatant with very few weaknesses that was able to run roughshod over opponents. Its low defense was masked with Reflect, the generic ‘special’ stat meant it could wall elemental attacks just as well as it could dish them out, and its purported weakness, the dreaded ghosts? The only ghost-type attack that dealt variable damage, Lick, was improperly programmed, making it completely useless. In conjunction, the Gastly family’s secondary poison-typing meant an encounter with Alakazam was bound to end in exorcism.

Three specific mechanics were so infuriatingly broken, they can be used to completely shut down an opposing team. Sleep-inducing moves take an entire turn to awaken from, allowing a speedy Pokemon to immediately put them back under in the next turn, and multi-hit moves like Wrap or Fire Spin not only prevent a Pokemon from fleeing, they completely render them unable to move. The overpowered Hyper Beam, a move with the caveat that it requires its user to recharge after launching, has that drawback removed if it successfully knocks out its target, aka the best possible scenario.

These oversights reveal a series of poor game design choices and mistakes, and there are loads more to be found throughout Red and Blue. Some are major, like the infamous MISSINGNO glitch that can either ruin your save data or yield infinite items, depending on how you used it, while others are more forgivable. The poor interface made using HM moves cumbersome, and the AI completely nullified any threat posed by even the strongest enemies. Taking a Bulbasaur into the Celadon Gym is a hilarious display of determination in the face of impossible odds: Erika absolutely would not stop trying to poison your monster until the bitter end, despite its immunity. A grass-type specialist that can’t figure out the resistances of Kanto’s most famous grass-type Pokemon? Stellar.

Puzzles in Red and Blue range between straightforward and grating. Slowly pushing boulders around caves while getting mugged by a Zubat every few seconds is hardly the definition of fun, while the riddle of the teleportation tiles in Saffron City can be solved by literally going up or down in every room. Doing this not only takes you to Sabrina, but it also allows you to forego any other trainer battles in the process. Many puzzles are slow to develop, while others, such as Vermilion City’s electric switches, are too random to be satisfying.

Some of the adoration can be entirely subjective, which makes it harder to debate. Many attest that the original Pokemon had better and more memorable designs, often citing later additions like Litwick or Garbodor as examples of the decline. And while several of Kanto’s Pokemon have rightfully become iconic, let us not ignore the fact that it also included a pink blob with a smiley face, two variations of leering balls, and a collection of angry eggs. Again, it’s subjective, so you can’t really argue one way or the other.

All of this doesn’t go to say that Pokemon Red and Blue are bad games, of course – they are simply riddled with warts and teething problems that were ironed out in subsequent releases, some as soon as generation 2. The sequels, Gold and Silver, balanced the typing chart by adding the dark type to keep psychic Pokemon in check, adjusted the aforementioned dodgy mechanics to make them more palatable, and divided the special attack and special defense statistics, allowing some Pokemon to become more, well, specialized. Further tweaks would occur with each generation; giving every Pokemon a passive ability, assigning individual attacks with their own physical or special designation, adding online capabilities for trading and battling that allowed you to challenge the best trainers in the world…

One of the major features of the Pokemon franchise is evolution, and in the same way your humble Dratini someday spreads its wings as the colossal Dragonite, so too did the games, building upon those principles of catching, fighting and trading, and expanding them in wonderful new ways. The controls are streamlined, the strategies and team-building options thriving, and even simple things we take for granted like the move deleter or move reminder, make raising your Pokemon a less taxing experience. And those original 151 beasts that we all so treasured? They’re better than ever; Chlorophyl makes Venusaur a menace in the sun, Charizard has two different mega evolutions to play with, and moves like Rapid Spin have increased Blastoise’s utility tenfold. All of your old favorites are still there and ready to go, but they’re vastly improved, and the expanded repertoire means that they don’t always have to play the same role.

Unfortunately, it may be that these words will fall on deaf ears. Those resistant to change will have their own personal reasons for sticking with gen 1, stubbornly refusing to alter their stance even in the face of undeniable facts. And you know what? That’s completely fine – Red and Blue came at just the right time for many people, bringing with it a certain unquantifiable magic that could not be replicated. As for the rest of us, we can look back on those quirky little titles fondly, but with a tempered expectation.

Going back to play Red and Blue is much like revisiting any other old game. You come for the nostalgia, you stay for a few laughs, but at the end of the day, you’re thankful that things have progressed so much further in the years that have come since.