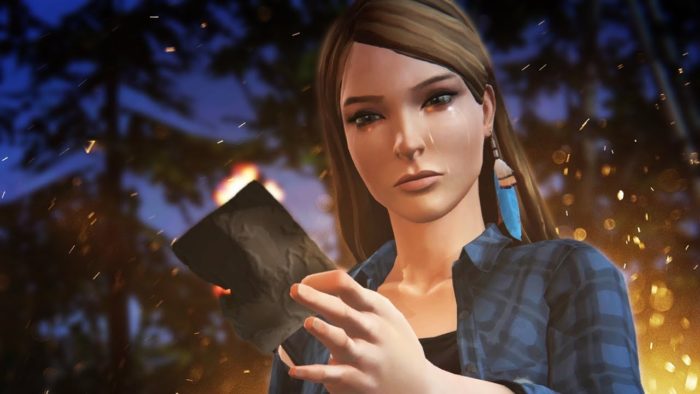 The coolest part about Dontnod’s Life Is Strange was how polarizing the game’s final decision seemed to be. When the episode was released, the fanbase was split right down the middle with regards to the ‘bay or bae’ choice. Sacrifice Chloe, and you’ll save the town from the storm. Or you could sacrifice Arcadia Bay, let the storm destroy everything, then run away with Chloe. There are plenty of arguments to be made for justifying either side, but one thing was clear: it was no easy decision because of just how attached players had become to Chloe by that point in the story.

In Before the Storm, even without the threat of impending doom, developer Deck Nine has managed to capture that same degree of emotional brevity and gravitas with the game’s final decision. But with a key difference: there is only one correct choice. Even if the post-game player stats beg to argue otherwise.

As a prequel to the original series, Before the Storm had a lot to prove. Given that players already knew the fate of Rachel Amber, the tragic enigma, it was important that Deck Nine provided a reason to care about her and her story. Throughout the series, it quickly becomes clear what the ‘gimmick’ is in Before the Storm. As long as the story succeeds in making the player forget about what they know from Life Is Strange, even if it’s just for a little while, then the game’s done its job. The idea here is to paint Rachel Amber as a personality that’s charming and enticing, but not completely knowable at the same time.

And of course, there’s her undeniable chemistry with Chloe. But as fantastic as their interactions have been in this entire series (shout out to that stellar second episode, by the way), there’s one small but important moment that should be kept in mind before making that final choice. The train segment with Two Truths and a Lie in episode one perfectly encapsulates the relationship between Chloe and Rachel. Without prior knowledge of Life Is Strange, it would be pretty hard to guess when Rachel’s telling the truth, and when she’s lying. But try as you might to fool Rachel at her own game, she’s able to read Chloe like an open book.

On one hand, Rachel being able to pick out the lies is exactly what Chloe needs at that point in her life. It’s comforting to know that there’s someone out there who pays attention to her and understands her. At the same time, it’s also a little disconcerting that nothing ever really escapes Rachel’s notice.

The concept of deception is prevalent throughout Before the Storm, and we see it in so many aspects of the story. Rachel being an amazing actress, Samuel pointing out that everyone has a side they don’t want the public to see, Drew hiding his connection to Damon in order to help Mikey and his father, and the lengths to which James Amber would go in order to ‘protect’ Rachel from the truth about her mother. And let’s not forget Rachel’s whole dialogue about stars being blindingly beautiful even if we don’t know they’re already dead, and Chloe’s struggle to accept that William might not have been the perfect dad she thought he was.

Amidst all of this deception, though, we as players slowly begin to recognize that Rachel is essentially the only person we can really trust in the game. And she feels the same about Chloe, too.

When it comes down to it, the final choice isn’t deeply significant in terms of Life Is Strange lore. Regardless of what you choose, Rachel’s fate doesn’t change. She’s still going to be kidnapped, she’s still going to die of an overdose, and Chloe is still going to put up all those missing person posters in an effort to find her. But the magic of Before the Storm – and Life Is Strange, for that matter – is allowing players to connect with the characters on a deeper level because of all the personal experiences we can draw from our own lives and use them to relate to the messages in the game.

We’ve all been lied to, whether it was done to hurt us or protect us. And hopefully, at some point or other, we’ve all encountered a person that we felt we could trust with no inhibitions whatsoever. That’s exactly the kind of relationship Rachel and Chloe have in Before the Storm, and it’s up to us how we want to handle the truth with regards to that dynamic.

The game’s final moments leave Chloe with an important decision to make. We learn that Rachel’s father has been keeping Rachel’s biological mom Sera away from her this whole time, even after she’s cleaned up her act and is ready to meet her child. We learn that James hires Damon Merrick, a ruthless thug, to kidnap Sera and get her hooked on drugs again just so he can feel comfortable in saying that he is indeed protecting Rachel from her druggie mom. It’s even implied that James might have very well intended to kill Sera with a drug overdose, as indicated by him saying they shared a goodbye kiss in the first episode.

Despite all this, Sera tells Chloe to hide the facts from Rachel because the truth would hurt her more than a simple lie. According to Sera, telling the truth will result in Rachel losing her loving father, exposing her to the pain of parental loss that Chloe is all too familiar with. It’s up to Chloe whether she wants to protect Rachel from this truth or expose everything.

Up until this point, the whole game has been building up the idea that everyone is hiding something. For her whole life, everyone has been lying to Rachel in an attempt to ‘protect’ her, but the fact of the matter is that no one really has the right to decide if you should be protected from something or not. Rachel says herself that she’d always known that something wasn’t quite right in her life — and that something turned out to be her missing mother. Her reaction after learning about the existence of Sera is understandable, then. It’s not the situation (which honestly wasn’t even that severe at the time) that causes her to behave so emotionally; it’s the lie itself, the way she found out about it, and how unprepared she was to face this truth.

Considering that Rachel now regards Chloe as the only person she can trust in the world, it feels almost immoral to tell a lie to someone who trusts you so implicitly. After all, if Before the Storm’s story is anything to go by, the truth will always find a way to expose itself. And it certainly doesn’t help that Rachel seems to be eerily perceptive when it comes to reading Chloe.

Assuming that Rachel learns the truth eventually (which seems highly likely), we can only imagine how betrayed she would’ve felt, not only by her father’s actions but by learning that Chloe had lied to her as well. Looking back at it now, the final decision feels like a remarkably easy one to make. We’ve all probably been in situations where we felt really strongly about having to lie to someone we care about in order to shield them from some ugly truth, but no one deserves to be lied to, no matter the reason. It’s fitting, then, that the final decision gives us the power to break the cycle of deception Rachel’s been trapped in for such a long time.

Back in the train with Rachel during episode one, before you start playing Two Truths and a Lie, there’s a neat little graffiti opportunity where Chloe can either write “We are monsters” or “Everybody lies.” Both are true, Chloe. Everybody lies, but that doesn’t mean we have to.