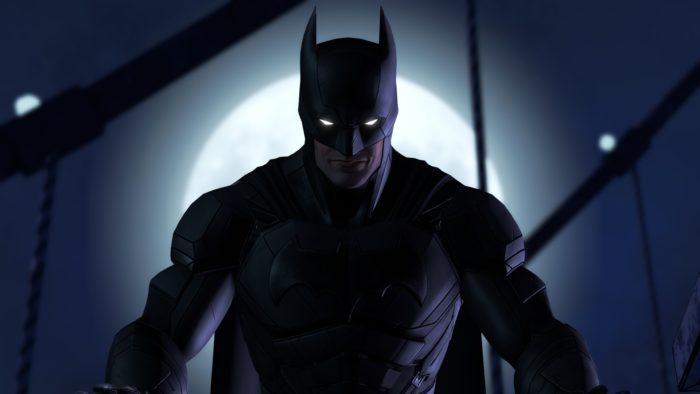 Batman: The Enemy Within – Episode 4 on PC

Things finally come to a head in episode 4 of Batman: The Enemy Within. The past three episodes have been building up a conflict between the Pact and the Agency. John’s inevitable transformation into the Joker has also been a central pillar of the plot, and here, it’s finally reaching an exciting crescendo. Everything is coming together nicely in a cohesive and compelling narrative. Unfortunately, though, as has been the case for many of Telltale’s recent episodic stories, not before completely rendering a ‘major’ decision from the end of episode 3 totally meaningless right from the off.

Episode 3’s ending forced us to choose between sacrificing Bruce or Catwoman to Mr. Freeze’s contraption, and in my game, I opted to sacrifice Bruce. Because, well, clearly the main character isn’t going to die, and why would I risk the ire of his new girlfriend when I already know he’s equipped with plot armor? Either way, things kick off with Bruce’s speedy escape from Mr. Freeze’s pod, and he decides to confront the Pact as Batman to stop them from stealing a deadly virus. There are some repercussions for sacrificing Bruce over Catwoman, as you’ll soon see in the episode, but in all honesty, they felt so minor and inconsequential that the whole decision seemed like a non-issue anyway.

That aside, episode 4 doesn’t waste any time in getting the player into action as Batman engages in yet another well-choreographed fight scene with the likes of Bane and Mr. Freeze. After that, the episode’s pacing slows down to a crawl as we’re forced to track down Harley Quinn and stop her before she unleashes the virus on Gotham.

That’s probably the biggest complaint of this episode. The pacing felt off for the most part and was simply a case of Bruce and Batman trying to pick up the pieces from the latest confrontation. The episode continues to explore Alfred’s mysterious illness – something that’s been hinted at all season – but the story still fails to do anything meaningful with it, and it remains to be seen whether it’ll have any sort of impact in the upcoming finale. As has been a major complaint of mine all through the past three episodes, Tiffany continues to get shunned in the story, only popping her head into the picture to ask for Bruce’s opinion on what could potentially be a major factor in how her character is shaped by the end of the story. Still, I can’t help but think back to the debut episode where we’re given a chance to clue Tiffany in on the clandestine Batman business, and how little that decision ended up mattering anyway. I’d like to see Telltale do something interesting with Tiffany’s character now that Lucian is gone, but with only one episode left to go, that doesn’t look like something we can expect. In this season, at least.

As always, John continues to be the highlight of this episode, especially as we get closer and closer to his complete transformation into the iconic Joker. In the latest confrontation with him, there are a couple of major decisions that seemed to imply that we could either speed up that transformation or stall it out for a bit longer. This is where your ‘bond’ with John really comes into play. He remembers all of your interactions with him, and he remembers if you might’ve done something to make him jealous of your connection with Harley. Bruce’s interaction with John has been the best part of Batman: The Enemy Within by far, and all of that finally heats up to its boiling point in episode 4, where everything you say to him feels like it could make or break your friendship. If there’s one thing to be said for this series, it’s that it never fails to get me excited to see what happens next between the two of them in the next episode.

Unfortunately, the episode ends on a bit of a low note as things seem to end rather abruptly. Episode 4 also feels like the shortest one of the bunch so far, with major characters taking a backseat. There’s no sign of Gordon this time around, for instance, and Catwoman disappears after a brief scene at the beginning of the episode. Episode 4 has certainly done its job by setting things up for the grand finale, but the good parts were too few and far between, and the execution felt rather sloppy overall.