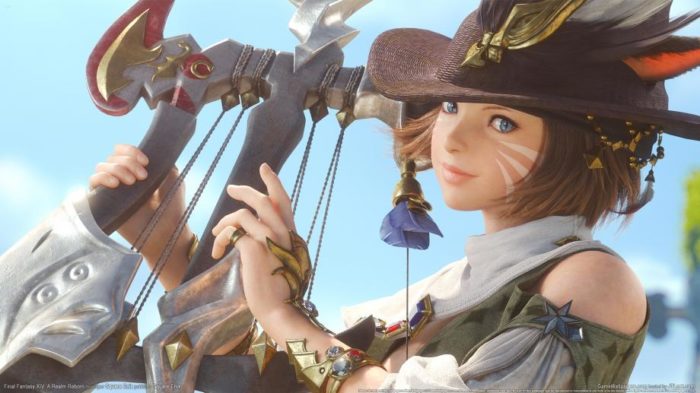 I’m all about immersion and having a grand role-playing adventure in my RPGs. So when I finally decided to take the leap and jump into Final Fantasy XIV as my first ever MMORPG, it was like a whole new gaming world had opened up to me. I spent a month leveling up the Carpenter job, offering my services to other Eorzeans who needed furniture for decorating their houses, and buying wood from Botanists so I could continue to hone my craft. Being able to live in what was essentially a second world by making good gil and selling furniture made Final Fantasy XIV an experience more immersive than anything else I’d ever played.

Not too long ago, Square Enix dropped a new patch for Final Fantasy XIV, and one of the biggest changes brought to the game was the ‘Perform’ function for the Bards. Since the game’s inception and its rebirth as A Realm Reborn, Bards have always been seen carrying around their harps and lutes, but they’d never been able to actually use it outside of combat. This patch changed all that and allowed Bards to actually play musical notes with their instruments. And the best part was, anyone within a few yalms of your character could listen to your music.

Since the patch drop, there have been all sorts of legal concerns with the Perform function. Right before you can start playing your music, there’s a whole Actions Agreement you have to read through and agree to. It explicitly states that players have to keep their music “FFXIV-related,” and that the playing and uploading of performances of third-party music is considered copyright infringement. At the moment, playing third-party music or songs in Eorzea doesn’t seem to be too big a deal, but Square Enix is likely to come down pretty hard on anyone actively recording and uploading performances to YouTube.

Even so, Perform has completely distracted me from my daily Tomestone grind. Now, instead of continuing my work as a good and honest Carpenter, I’ve switched back to my old Bard job to start learning the notes and trying to play simple tunes. What’s so mindblowing about this feature is that it opens up so many more possibilities in terms of activities you could engage in outside of raiding and level grinding. While most players will find joy in leveling their crafters and gatherers, the addition of Perform makes it possible for players to form bands and performing groups all throughout Eorzea.

Clearly, I’m not the only one who sees the appeal of this function. Shortly after the patch went live, a new song wiki blew up on the FFXIV subreddit, containing simple directions on how to perform certain songs. Some players have even gone one step further and have taken to using MIDI controllers to make use of Perform. While some Bards might be content with creating custom macros and keybindings for their music, other Bards want to go the extra mile with MIDI controllers to become truly professional Eorzean musicians.

It’s been a couple of months since the last major content drop with The Legend Returns, and most Final Fantasy XIV players are going through a bit of a content drought at the moment. Sure, you could continue grinding out your crafting and gathering levels if you really want to, but as enjoyable as those few levels are, the crafting/gathering game quickly becomes a painful grind once you start hitting the 30s and 40s.

Most modern MMORPGs are centered around a level grind, and that’s fine because that’s how companies keep their subscribers hooked on the game. But maybe enjoying an MMO doesn’t necessarily have to mean subjecting yourself to a grind all the time; by releasing the Perform function, Square Enix has opened up a new creative outlet for players who are just looking to enrich and enhance the ‘immersive’ experience they signed up for when they started subscribing to Final Fantasy XIV. The results have been quite positive as well; you need only search ‘FFXIV Bard performance’ on YouTube to check out hundreds of innovative musical performances from players. There’s already a whole culture being built around musical performances in Eorzea.

Performing Bards could actually dress up and form a band together, as mentioned previously, or they could even become buskers to try to make a little bit of gil on the side. Living on the Balmung server, it’s not uncommon to see players gathering for dancing flash mobs in the middle of Ul’dah or Kugane. Imagine how much better those flash mobs would be if we had players providing the in-game music for the public. Eorzea is meant to be a second world for you to live out your virtual life after all. The world is your oyster, so go be a street performer if that’s what you want.

If you’re reading this, Square Enix, the Perform function was a fantastic addition to the game. How about adding some new instruments next?