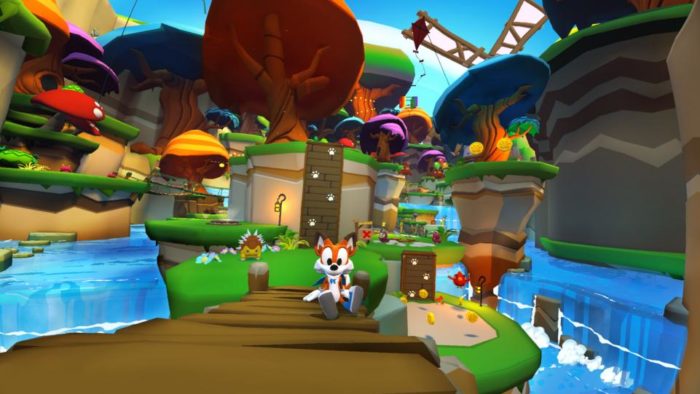 Super Lucky’s Tale on Xbox One

Super Lucky’s Tale leaves an excellent first impression. After a short intro, you enter the tome world that Lucky bravely set out to explore in hopes of becoming a full-fledged fox guardian. You’re greeted to a bright and colorful world filled with cheery uplifting music, and promises of a big adventure ahead. I don’t want to go as far as to say that I was conned, but the adventure slowly starts to come off the rails the longer you play Super Lucky’s Tale.

The first thing you’ll notice about Super Lucky’s Tale is how charming it is, especially if you’re playing it on the new Xbox One X. If you’re in your mid-late 20s like I am, it tugs at all those nostalgia heartstrings where 2D/3D family friendly games were the heavy hitters on a system. It doesn’t take long for that charm to wear off, though. The gameplay in Super Lucky’s Tale is trite as there’s very little that hasn’t already been done to death. You simply go from level to level, which are mixes of 3D platforming with a focus on finding collectibles while taking out enemies and straightforward 2D platforming. Your goal is to collect Clovers (think Stars, Moons, Jiggies, etc.) which you get from finishing levels and achieving side objectives such as finding all hidden L U C K Y letters, or completing secret objectives.

It’s not like we’re flush with games like Super Lucky’s Tale these days, and the fact that it’s a hybrid of 2D/3D platforming is kind of cool. The problem, though, is that the gameplay never really evolves and the controls are rough around the edges. Lucky feels like he’s wearing lead shoes and it makes the platforming imprecise in certain spots. All he can do, for the most part, is jump and spin his tail to stun enemies. Making matters more frustrating is that you can’t spin your camera 360 degrees. It allows only slight shifts to the left and right, which makes it difficult to get a full picture of my surroundings when trying to figure out where something is. The game’s 3D levels like to give you an illusion of exploration but because you can’t really look around, you’re usually funneled into a specific path to progress.

So once you’ve played a few levels, you effectively have played every level of Super Lucky’s Tale. You’re going to jump on stuff, find things, get to the end, and then move onto to the next level. And yes, it does get repetitive. Slowly, over time, the game does add some complexity and challenge, especially in the 2D stages that I found quite enjoyable and big step up from the 3D, but it’s too little too late.

I started to get bored only after about on third of the way through the game because I never felt like I had anything to look forward to. The game worlds are pretty, but they are essentially just backgrounds since the themes don’t really do anything to mix up the gameplay in a meaningful way other than dressing the puzzles and challenges in different skins.

Although there’s a hub world, the game is very linear, save for when you need to go backwards to pick up clovers that you missed or didn’t want to be bothered to find. It’s quite strict about progressing to the boss fights at the end of each world. You need to get a good percentage of the clovers to be allowed to proceed. There are themed bonus puzzles found in each hub to help you with that, but they too are generally repetitive.

If this sounds pretty grim so far, I want to back it up a little. Despite how negative I sound to this point, Super Lucky’s Tale isn’t a bad game. Everything about it is fine, adequate, and distinguished as an effort. If you have a desperate thirst for a 3D platformer on the Xbox One, though, might I suggest A Hat in Time instead? Did you play that already? How about Yooka-Laylee? That too? Then okay, go ahead and play Super Lucky’s Tale. It’ll scratch the itch without being offensively bad. Its simplicity compared to the other games I mentioned make it a good fit for children or first-time gamers, which is a value worth mentioning. It’s just that Super Lucky’s Tale doesn’t really do anything to stand out, nor is anything executed that well in comparison to other recently released games you could play instead.