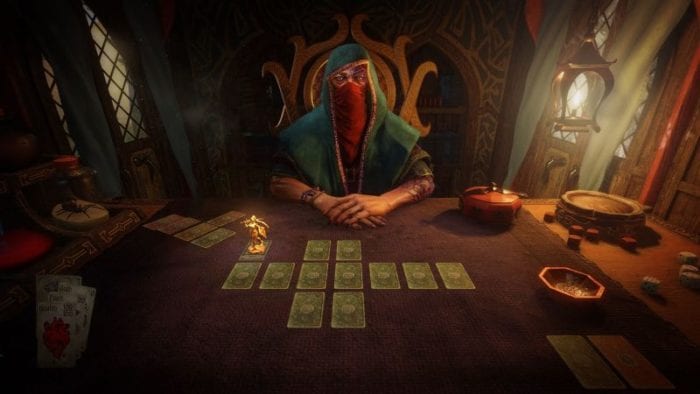 HAND OF FATE 2 ON PLAYSTATION 4

“Every failure in combat can be balanced by success on the table,” the dealer explains as he eagerly awaits your next move. This quote pretty much sums up Hand of Fate 2 from both the gameplay side of things, as well as the quality of the two areas. Hand of Fate 2 is made up of two interwoven gameplay styles: a Dungeons & Dragons style tabletop, text-based dungeon crawler; and a hack and slash action game.

Hand of Fate 2 is divided into 22 challenges, each having their own individual narrative. Your character remains the same throughout Hand of Fate 2, but the game mainly tells the story through little vignettes of your journey. There aren’t any cutscenes, instead the game opts to describe the narrative through text. Sticking with the D&D style, you’re required to use your imagination to visualize the happenings of the hero, which works well with the tabletop theme that the game is going for.

Sometimes the dealer will commentate on the happenings of the game. It’s nice to see a little bit of voice acting in an otherwise quiet game, but he often butts in at the same time that the text appears on the screen, meaning that you either have to stop reading and listen to him, or ignore him entirely so that you can concentrate on the text. It can be a little annoying. Towards the end of the game, an overarching plot begins to seep in, and while it is nice to see a little bit of context as to the occurence of this ‘game’ that you’re playing, it isn’t fleshed out enough to leave any lasting impact.

The best part about the game is by far the tabletop card game itself. At the start of each new challenge, all of your stats and equipment are reset. It is your job to traverse the table, increase your stats, earn new equipment and try to stay alive throughout. A single death means restarting a challenge from the beginning, so it’s vital to prepare accordingly. This is where the cards come in. Each new step reveals a card which can have a number of different effects. There’s cards like ‘westward plague’ where you can fight an enemy type known as ‘corrupted’ to earn money, ‘arm wrestle’ where you can earn money in a game of dice, and ‘general store’ where you can trade equipment or buy food.

Half the deck is set by the dealer, while the other half is determined by what you pick from your collection. Your cards determine your companion, your encounters, what equipment you can collect as well as your starting equipment and stats. There are hundreds of cards in the game, giving you plenty of choice for the challenges that you’ll face. Nowadays, you may hear the word “cards” and immediately think of micro-transactions, but with Hand of Fate 2, that couldn’t be further from the truth. All of the cards in Hand of Fate 2 are unlocked by completing the challenges or obtaining bronze tokens from certain cards. Unlocking cards in this game can be very addictive, and quite tough, but the reward is definitely worth the effort. The sight of a new powerful platinum card simultaneously fills you with a sense of accomplishment, and a sense of relief knowing that you’ve made that next challenge a little easier. It’s also clever that a new card’s effect won’t be revealed until you’ve used it at least once, forcing you to experiment with every single card that you unlock to find the ones that fit your needs.

Each new challenge presents a main objective and a secondary objective. Usually, your main objective is to get to the end of the table, although this can greatly differ during some challenges. The secondary objective is always something that you have to go out of your way to do, most of which are quite difficult to achieve, especially on your first run through. Oftentimes, taking a varied path can lead to difficult encounters or cards that reduce your life or resources, i.e. food and gold. Each step also consumes one food, which, if you run out of, can lead to a great loss in health, so you’ll have to be well prepared if you’re going to attempt the secondary objectives. Completing these challenging secondary objectives will unlock a gold token which gifts you the most powerful cards in Hand of Fate 2. They can take a lot of strategy and a bit of luck. It’s a good thing, therefore, that the unique requirements for each secondary objective make them a lot of fun. Some are rather unorthodox and will have you wracking your brain to figure out how to accomplish them. For example, the secondary objective in the ‘Devil’ challenge requires you to cross to the other side of the table without a path of cards to lead you there. It requires you to carefully plan your deck in order to manipulate the ‘game’ in your favor.

However, being a game involving cards and dice, there are a great deal of instances that are out of your control. Some cards will cause a gambit to play, some of which are pure luck, such as dice, while others are timing based, such as the pendulum. This is also something that needs to be considered when building your deck. Certain companions and equipment can help push the odds in your favor. At some point, though, you may experience a death entirely due to bad fortune. This can be pretty frustrating toward the end of some of the later challenges, where you lose 45 minutes of progress because of one bad chance gambit toward the end.

Your deck doesn’t just affect what happens on the table, but also directly affects when combat occurs, and what you take with you into combat. This area is the biggest weakness of Hand of Fate 2. Combat is initiated by certain cards, one of which will always appear at the end of a challenge. If you become adept at the combat system, then your failures on the table won’t matter much. Battling is very simple. Other than mashing the square button, all you really have to worry about are when to block and when to dodge, which both have easy tells: when the enemy glows green, press triangle; when it glows red, press cross. Besides an extra powerful attack that you can unleash periodically, that’s about it. This is what you’ll do for every fight. Different enemy types and different weapons won’t change this formula. Your companions have cooldown abilities and you can bring limited-use spells in the form of artifacts into battle, which makes combat a little more interesting, but ultimately doesn’t fix the monotony of the combat system.

Although better equipment helps, you can clear every fight in the game with your starting weapons; you’ll just be hitting the square button a few more times. The difficulty only ramps up when the later challenges start throwing in 10, 15, 20 or more enemies at a time. It can be impossible to avoid two attacks at once, which feels really cheap. And the targeting system in this game is very bad. Your character will aim at whichever enemy is closest, making it really hard to stay focused on a single enemy after countering another. The combat is serviceable, don’t get me wrong, but it can get very repetitive, very quickly. Seeing as you’ll be spending around half of your time in combat, it’s kind of disappointing. The loading screens to and from each encounter are pretty long, which also slows the pace of the game down, and helps make combat something to dread rather than enjoy.

With that being said, though, it is the marriage of the tabletop and combat sections that is the core to the enjoyment of Hand of Fate 2. The over looming final fights are what make it so important to perform well on the table. Yes, you can lose health when you draw certain cards, but it isn’t as substantial as the amount of life that you could potentially lose on the battlefield if you are under prepared. The most intense moments in Hand of Fate 2 are when you’re low on health and have to enter a difficult fight. I jumped for joy after clearing the final battle of a challenge with a single hit point left. Even though the combat isn’t the most fun, its inclusion gives greater purpose to the sections on the table, and further encourages you to prepare well. If the game lacked combat, there would be no stakes.

And now we return to the quote at the beginning of the review. “Every failure in combat can be balanced by success on the table.” The tabletop element of Hand of Fate 2 is a blast. The variety in the objectives forces you to build new decks and develop new strategies on how to tackle each new challenge. Some of the challenges are designed so cleverly that you’ll have to discard some previous knowledge of how you thought the game worked in order to solve them. Not only this, but the way you unlock the cards are fair and addictive, adding hours of replay value as you try to acquire all of the gold tokens. But the quality of the overall experience is held back by the repetitive combat. It’s a shame, too, as if this area of the game was improved, Hand of Fate 2 could have been something truly special.