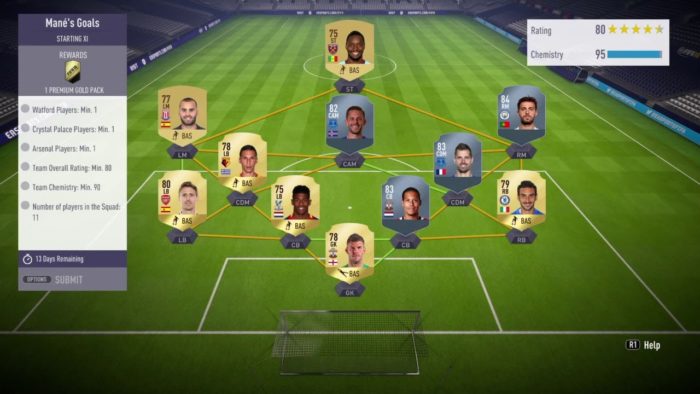 It’s been a busy few weeks since I last penned my thoughts about FIFA 18. Super Mario Odyssey, Assassin’s Creed Origins, Wolfenstein II, and all manner of other titles (and other non-video game stuff) have diverted my attention from really developing my Ultimate Team. The number of games I’ve managed to squeeze in has been minimal, but that hasn’t stopped me from checking in and doing bits and pieces just about every chance I get. Squad Building Challenges (SBCs) are a huge part of that. And, surprisingly, FIFA 18’s Companion app is the other perfectly-shaped piece to complement it.

If you’re unfamiliar with what Squad Building Challenges are, here’s a quick rundown. SBCs were introduced last year during FIFA 17’s reign. They task you with creating a team that matches certain criteria in exchange for packs, coins, or just rare cards. For example, you might need to make a gold team, consisting of three different nationalities, three different leagues, and an overall chemistry rating of 80. Of course, in order to complete these challenges, you’ll likely need to jump into the transfer market to pick up some crucial components that you’re missing. In exchange, you might get a jumbo gold pack or two to (hopefully) bolster your squad. Though, as most fans will know, you’ll probably sell the entire contents 90% of the time. Essentially, Squad Building Challenges is a puzzle game mode within the Ultimate Team game mode, and that makes it mighty compelling regardless of your other commitments.

In most cases, there’s no rush to finish the Squad Building Challenges you’re working on, though some are only live for a limited amount of time. You can complete the majority of them at your leisure over the course of a few days, or blast through them in five minutes if you’ve already got the players you need. Ranging from the incredibly simple and cheap to complete Basic variants, to the fiendishly challenging and bank-breaking ICONS Squad Building Challenges, EA has done a pretty great job at making the mode feel deep and interesting for players of all skill levels. I’m not afraid of confessing the few hours I spent in front of my Xbox One late one night flitting between the Transfer Market and a few SBCs trying to work out the best way to meet the darn Chemistry requirements with the Coins I had available. There’s an incredibly satisfying feeling to submitting your completed team and reaping the rewards, so much so that it’s become a part of my daily routine.

This is where the FIFA 18 Companion app comes into its own. Providing players access to the Transfer Market, their teams, Squad Building Challenges, and packs, the app actually makes it incredibly easy to progress and manage your Ultimate Team without having to be sat in front of your PC or console. As I previously mentioned, I’ve somewhat neglected FIFA 18 in recent weeks for one reason or another. I don’t have the time to sit in front of my Xbox One and pour endless hours into trying to make the Weekend League, or play the crazy 40 games once I’ve qualified for it. Whether I’m commuting, waiting for another game I’m playing to load, or just watching some TV in my downtime, though, I’ve found myself constantly logging into the app, making bids on the Transfer Market or slotting a newly-purchased player into one of my SBCs. Pairing the accessibility of SBCs up with the companion app is a match made in heaven for the busier FIFA fans out there. Heck, even when the RNG gods aren’t smiling down on you with the rewards you get, there’s a compelling cycle that makes Squad Building Challenges such a joy to play around with as a separate experience to the larger Ultimate Team affair.

In reality, Squad Building Challenges do a heck of a lot more than just providing a distraction to the main Ultimate Team offering. They essentially dictate the ebbs and flows of the Transfer Market. Gold cards are almost always worth something. Themed SBCs can cause massive spikes in prices for gold and silver players, and consumables are far cheaper than ever before because packs are being opened more frequently as rewards.

Squad Building Challenges is kinda magical in that way. Its impact on the Transfer Market is huge, yet on the surface it’s just a stupidly fun puzzle mode within the larger Ultimate Team experience. Now, if you don’t mind, there’s a Del Piero Icon SBC calling my name!