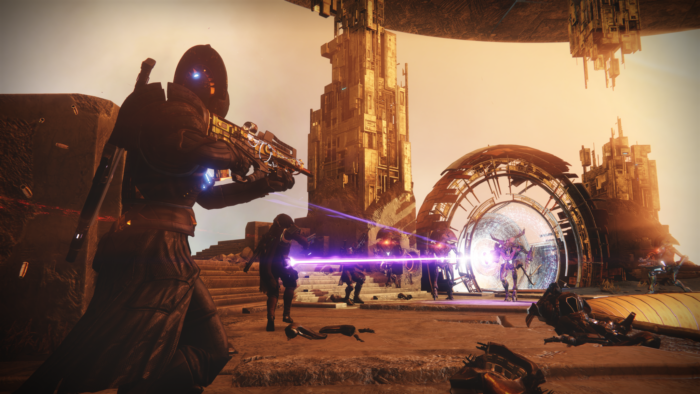 Bungie recently revealed the all new Public Event that will be playable on Mercury for Destiny 2: Curse of Osiris. We got to play “Vex Crossroads” a few weeks ago and unlike the new strikes, it’s an improvement over what we have seen in Destiny 2 to date.

In case you missed today’s live stream, the event takes place in the heart of Mercury. The event begins with you clearing gate keepers to shut down warp gates and cut off the flow of Vex into the space. In order to get where you need to go, you’ll need to make use of launchers that will send you flying across Mercury to islands not normally accessible. The presenters during the live stream said it best: it’s like a Vex circus.

Normally, if you’re not going for the heroic event, you’ll then move onto defeating a Gate Lord that has the strength of a story mission boss. However, during our hands-on play, we were able to accidentally trigger the heroic event. I tried really hard to convince the folks at Bungie to tell me how the heroic public event was triggered exactly, but they wouldn’t budge. That said, from what I could gather, it involved us making a pit stop onto the warped-in/assembled platforms off of the map and shooting objects down out of the sky quickly before the platforms disappeared and you fall to your death. Again, take that with a grain of salt because we were not able to get confirmation if that’s what did it, but we do know how it changes the public event going forward.

Once all the gates are closed, a mission-like boss will spawn in a center location. For the normal version of the public event, you move in on Gate Lord, kill it, get your loot, and Vex Crossroads is over. However, the heroic version gives the Gate Lord an impenetrable shield that can only be broken by killing hydra gate keepers, flying around the area slam dunking orbs again, while also keeping the Gate Lord off your back.

All-in-all, Vex Crossroads is the most elaborate public event to date, and it’s an absolute blast to play. That said, like all public events, it will get tired eventually after doing it tens or even hundreds of times. We’ll accept this one for what it is: a stepping stone, but the next big leap includes some more randomized elements.

Public events, especially this one, are fun when they feature clever heroic modifiers, and keep you on your toes and moving around. The heroic version of the Vex Construction is great example of a fun public event since it forces you into an uncomfortable position, having to hold down various locations while also keeping your head on a swivel, making sure not to allow any Vex to slip by and sacrifice themselves. Another one is the Fallen Glimmer Extraction which has you driving all around the map to get from place to place quickly.

To build on that, it would be great if Bungie added even more dynamism to them, like randomly appearing rare modifiers that can show up and surprise players. Have it so there is a small chance that the Cabal can come crash down on your party while you’re doing the Injection Rig event, as an idea. It’s not out of the realm of possibility since that kind of tweaking already exists, albeit in a different way. You may not have noticed, but there are instances in the game where the dialogue varies, such as this one of Zavala saying, “operation baby dog” which is quite rare. Extending that approach to public events, adding small variations that can excite players when they actually get to experience them, would be a welcomed addition.