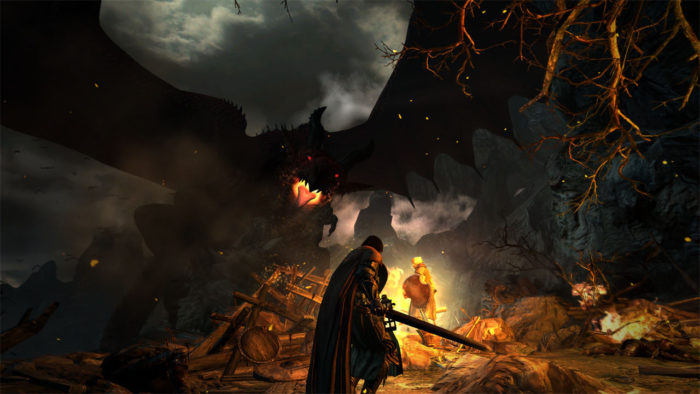 Originally released in 2012, vanilla Dragon’s Dogma was, to me, an interesting but flawed RPG. Combat felt solid as a whole, but there were certain weapon types and classes that felt way too unbalanced. Fast traveling in Gransys was a ridiculously expensive affair that forced players to rely on manually walking to their destinations that could drag out the experience at times. Dragon’s Dogma also had a plot that felt a little contrived for 80% of the game, though its insane final hours more than made up for the cookie-cutter RPG journey. And don’t even get me started on the pawns that won’t shut up (Beware the harpy’s song!). I played it once, and was done with the game.

That is, until Dragon’s Dogma: Dark Arisen released for PC. The Dark Arisen re-release was also available on last-gen consoles, but the vanilla experience was still so fresh in my mind that I couldn’t bring myself to revisit the world of Gransys just a year after my initial playthrough. When I did eventually jump into Dark Arisen, I was quickly convinced that Capcom had given quite possibly the best RPG they’ve ever created the polish that it deserved.

Dark Arisen addressed all of the issues I’d had with the original game. Vocations and weapon skills were re-balanced across the board, the prices for fast travel items (known as Ferrystones) and other important tools had been adjusted to a much more reasonable level, and – for the love of all that is good – pawn voice lines were cut down dramatically. They still shout out lines during combat encounters, but it certainly feels a lot less annoying and overwhelming than it had in the vanilla release. On top of all this, Dark Arisen also packed in all previously released cosmetic and equipment DLC for the game, along with a brand new dungeon to explore.

The new realm, known as Bitterblack Isle, is home to some of the most challenging content you’ll face in Dragon’s Dogma. Cursed gear found in the dungeon has to be brought back to an NPC so it can be purified and used. The dungeon is also one of the most well-designed you’ll find in the game, and it’s an absolute thrill to explore. In addition to the whole slew of armor sets, weapons, and challenging enemies you can find there, Dark Arisen even adds an extra final boss for players to fight at the end of the game. If you enjoyed the original Dragon’s Dogma, you’re going to find even more to love in Dark Arisen. And now that it’s available on PS4 and Xbox One, there’s no reason not to jump in.

But if you’re new to Capcom’s quirky little RPG, is this worth your time?

Well, if you have any interest in action RPGs at all, the short answer is yes. But stick around for the long answer if you want a more detailed explanation on why you should play this game.

For a game that’s a little over five years old, Dragon’s Dogma still holds up surprisingly well. The graphics have been updated for the new consoles, and its environments are seriously beautiful to look at. Don’t go in expecting photorealistic graphics and photo mode-worthy scenery, but if you were afraid of jumping into a janky-looking game, you have nothing to worry about. It’s worth noting that the PC version runs at a buttery smooth 60 frames per second, while the PS4 version is capped at 30. Still, the game runs prettily enough with no hitches or frame drops.

Appearances aside, Dragon’s Dogma also boasts a deep combat system that’s easy to pick up, but difficult to master. The different vocations (read: classes) available in the game dramatically change your play style, and at the beginning of the game, you get to choose between a sword and shield, daggers and a bow, and a staff as your starting weapons. Level up your starter vocation enough, and you’ll get access to more advanced classes that increase the weapon types you can wield and the skills you can learn. What’s even better is that you can change your vocations anytime you want after reaching Gran Soren, the capital of Gransys. There are very few limits to how much you want to experiment with the game’s combat.

With a deep and freeing combat system, Dragon’s Dogma also invites players to test their might against some gargantuan foes. The game’s fantasy roots are on full display here, with giant enemies like griffins, ogres, chimeras, and of course, dragons that could swoop down on you at any time, whether you’re prepared for a fight or not. Similar to the Monster Hunter games, some of these beasts could try to run away after you’ve whittled down their health, and you’ll have to find some way to ground them if you want to harvest their corpses and be rewarded with sweet experience points.

Different vocations will have different ways of approaching a fight; a mage would cast spells from afar, while a fighter could climb onto the beast itself and stab its weak spots. The ranger is my favorite starter vocation by far, just because they get access to a bow which can deal ranged damage. Yet if I’m feeling frisky enough, I could also hop onto the back of a cyclops and stab its eye if I wanted to.

Arguably the biggest novelty of Dragon’s Dogma is its pawn system. Every player gets to create a sidekick from scratch, starting with appearance and ending with their vocation. In addition to your own custom pawn, you can even venture into the online Rift area to recruit pawns that were created by other players and those on your friends list. In reverse, your pawn can also be recruited by others, and they may occasionally bring back gifts from their otherworldly adventures, as well as information on quests that you might not have gotten to just yet. It’s a pretty genius online feature, and it’s easily my favorite part of Dragon’s Dogma.

The game’s story is mostly typical fantasy fare, with a few crazy twists at the tail end. But if you’re looking for a deep, riveting fantasy tale with relatable characters to latch onto, Dragon’s Dogma probably isn’t the game for you.

I’ve spent more than a hundred hours in both the PS3 and PC versions of the game, and I’m certain I’ll continue to spend many more hours in Dark Arisen on PS4. From the early beginnings of the Cassardis sunset to the shadier night dealings of Gran Soren’s back alleys, Dragon’s Dogma: Dark Arisen continues to hold its position as the best action RPG Capcom’s ever made.