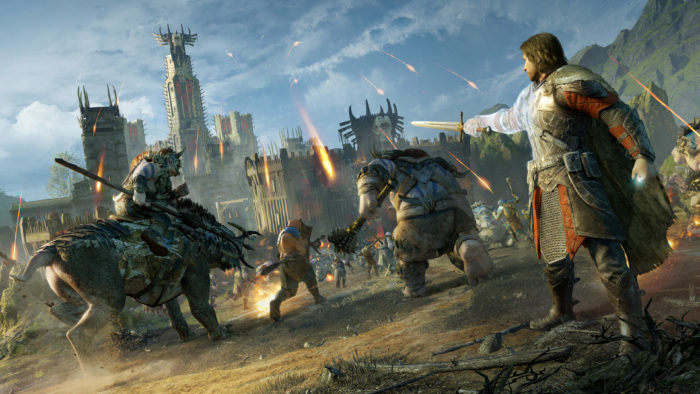 Middle-earth: Shadow of War On Xbox One

Let it be said that while I’m not a massive Lord of the Rings fan, I enjoyed Middle-earth: Shadow of Mordor. It offered a meaty slice of easily digestible lore that I could still get into without having pored over the massive tomes from Tolkien himself. It proved an intriguing and at times inventive twist on the Lord of the Rings saga, turning the things I learned from the film adaptations on their head. Shadow of Mordor was surely entertaining enough, but it was missing several integral pieces to make it feel like a more cohesive whole. Its direct sequel Middle-earth: Shadow of War builds upon Shadow of Mordor’s weaknesses to weave an engaging, brutal tale of power, revenge, and the allure of the One Ring.

If you’re a true Lord of the Rings fan, let it be known first of all that you’ll need to leave what you think you know about the series at the door before proceeding. Without spoiling too much, leads Talion and Celebrimbor return for this entry having made it their business to overthrow Sauron. Talion is a character much like Boromir, where Celebrimbor is one of the Elves who ended up helping to forge the Rings of Power. Both inhabit the same vessel, which gives Talion a supernatural appearance here and there that can come in handy when he needs to address a large group of Orcs or get others to do his bidding.

The game unwinds at a brisk clip, following the siege of Minas Ithil and expanding throughout Mordor with subtle hints that the line between the Bright Lord and the Dark Lord is becoming even blurrier than ever before. Talion and Celebrimbor aren’t exactly paragons of virtue, and that plot thread is the driving force that will keep you invested for the long haul.

There’s much to explore throughout Mordor, depressing and bland as it looks. It’s lousy with Orcs, creatures called Graugs, and other beasts ready to rip the flesh from your bones if you so much as look at them funny. It’s a world that might feel a bit uninspired were it in any other game, but here it’s brimming with personality thanks to the Orcs themselves. As the game moves along at a much quicker pace than Shadow of Mordor, you’ll spend a lot of time getting to know them as you often work on multiple quest lines at once.

As you fight your way through Mordor on your quest to overtake Sauron, the Orcs will become your constant companions. They’re undoubtedly the greatest draw of the game, and part of the most complicated mechanics Shadow of War contains. The Nemesis System has evolved considerably since its introduction in the first game, so much so that it’s nearly taken on a life of its own.

Much of your time will be spent overtaking Mordor’s fortresses and ensuring that you’re still in charge when enemy forces come by to steal them away. To aid you in both taking these fortresses over and defending them, you’ll have your Orc Captains, who have more personality than any other NPC I’ve ever come by.

That’s no exaggeration. The Orcs and Orc Captains that comprise the Nemesis System all feature random names, titles, and personalities with snippets of voiceovers and different motives to drive them all. In this, your attitude toward them, despite the fact that nearly all of your time is spent fighting or attacking Orcs to gain or defend ground, you’ll often grow to love them as though they were members of your own party, much like you would in a BioWare RPG or beloved Final Fantasy game.

You have the ability to “dominate” Orcs and then compel them to join your army, which is an exciting meta game in itself that gives the entire journey a much more compelling dimension. While I cared about the game’s overarching narrative, I often spent more time messing about with Orcs and building the perfect army than I did worrying about Talion and Celebrimbor’s plight.

The Nemesis System is a part of the complex relationships you’ll form with your Orcs. For instance, if you end up being killed by an Orc in battle, you may see them again celebrating the fact that they finally annihilated you, or cursing your name somewhere in an entirely different area. They know they’ve taken you out, and they love to gloat about it. You can complete “vendetta missions” to put them in your place and even add them to your army after they run about telling everyone about how they bested you through a process involving “shaming” or “dominating” them. It may not sound like much, but there’s a wicked, satisfying pleasure that comes along with taking these massive, powerful beasts and forcing them to join your Orc forces after humbling them with a fight that takes them to the brink of death.

Orcs can and will betray you, too. Worse, if you fail to keep them safe, they can perish and return to life, fully cognizant and upset with the fact that you didn’t care enough about them to keep them from dying. Your favorite Orc could turn into your worst enemy in this way, and the worst part is you may never be able to team up with them again when the Iron Will perk keeps them from being shamed or dominated. There’s real hurt, real disappointment during these moments, and I felt the sting of defeat several times, having let my little Orc friends down. There are ways around the Iron Will block, but it all comes at a cost. You could end up killing the Orc for good, and then you may never see them again.

This strategic waltz elevates Shadow of War from a run-of-the-mill action game to a personalty-driven game of tit-for-tat warfare that feels real. These aren’t just pixelated blobs that die over and over. They’re living and breathing companions, warriors, and friends that you fight to obtain and fight even harder to keep. I can’t recall a time in another game recently where I cared enough about a certain character to go to all the trouble to bring them back to my side after death.

This speaks volumes about the Orcs of Mordor and the Nemesis System in general. I cared less about companions like Galadriel and characters of her ilk than these scaly Orcs with dirt and slime encrusted on their person and skulls adorning their grimy heads. They became like family to me, and I often hoped so hard that they “felt” as though I treated them like it.

There are other visible improvements upon the first game as well, such as the augments made to the gear system, where you can see your new equipment on your characters when you put it on. With the wide selection of weaponry and items at your disposal, this is a satisfying feature that pushes you forward to complete Legendary sets so you can look your best, and make sure the Orcs are at the top of their game as well.

Talion himself is no slouch either, with an expanded set of powers and abilities that allow him to ride on fire-breathing drakes, strike from above, and turn Orcs to the side of the Bright Lord with little or no effort. Once you’re sufficiently leveled up, Talion becomes a force to be reckoned with, to the point where he need only look in an Orc’s general direction and you can practically feel them shudder. This can take a while to come to fruition, however. It can be a bit discouraging to have to grind until you feel like you or your Orcs are up to certain tasks, but this rarely becomes so large of a problem that it ceases to be fun to continue acquiring additional XP and new abilities.

Unfortunately, once you pass the third act, there’s a stark change in tone that takes place directly after a major turning point for the plot. It’s still fun following this change, but there’s a lot less variety after that, hearkening back to the first game’s issues with pacing and lack of choice in quests to undertake. It was a bit jarring to see things change so much after this particular event, but it still managed to maintain its rollicking pace up to the end. Luckily, my Orc friends were there to entertain and guide me along the way.

Of course, with all that said, there is one addition to the game that the first title was bereft of: microtransactions. These come in the form of the premium Gold currency and the ability to purchase Loot Chests ranging from Silver to Gold to Mithril. You can purchase Silver Chests with Mirian, the regular form of money earned in-game, but Gold and Mithril Chests must be bought with Gold. You can only earn Gold in small increments in-game by completing some objectives or spend real money on it. The introduction of these types of items has been a point of contention with players since it was released, and while it’s understandable people may feel slighted by them, I didn’t feel that the premium items took anything away from my experience overall.

Any item that you can pay Gold for can be earned in-game, albeit by less direct methods. Any Legendary Gear or Legendary Orcs can be added to your collection simply by playing through the game as you normally would. The in-game currency only served to offer a “fast-track” option for players who might not want to grind long hours to get a few Legendary Orcs, and it’s wholly inobtrusive in that way, at least during my playthrough.

Middle-earth Shadow of War consistently shocked and surprised me around every corner, with every Orc betrayal, every revelatory fortress takeover, and menacing look from the Bright Lord. It gripped me in ways I certainly didn’t expect having played the first game, and I’m already missing my trip through Mordor. I can’t wait to see more from this excellent franchise.