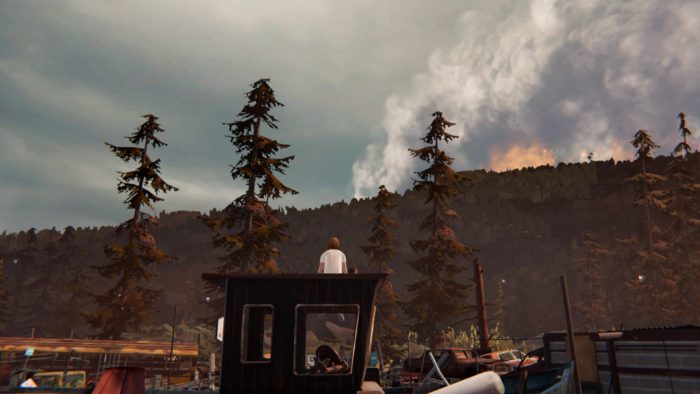 Life Is Strange: Before the Storm – Episode 2 on PlayStation 4

Life Is Strange: Before the Storm’s premiere episode came to a close with a heavy dose of teenage angst, perfectly setting the scene for episode two to roll around. We’d finally got to meet Rachel Amber for ourselves, and her relationship with Chloe Price wasn’t quite the fairytale that Chloe recounted it as to Max in the original series. Before the Storm’s second episode excellently dives further into this blossoming relationship, even if it does take a while to get going.

Episode two, titled ‘Brave New World,’ kicks things off with Chloe and Rachel facing the consequences of skipping school in the first episode. Even from this very early stage, it’s clear that the tumultuous events the two were embroiled in during episode one have strengthened their relationship. Rachel feels like she wants to be involved with Chloe now, rather than flip-flopping between being interested and not caring as she did in the first episode. And when you’ve done the kinda stuff these two got up to together, this strengthening of their relationship doesn’t feel forced or out of place.

It’s this focus on Chloe and Rachel’s relationship that really does take center stage here. Chloe is in a downward spiral. She can’t get anything right, she’s in trouble at school, and her mom and her former best friend, Max, are no longer supporting her as she feels she needs. It’s understandable, then, that she reaches out to Rachel. Someone going through similar problems. Banding together as they do doesn’t feel so out of place when you take into account all the crap they’re going through. But through moments of therapeutic ranting and rambling with one another, the two get by, and open themselves up to the player more and more as the episode goes along.

There are a lot of other moving parts in Before the Storm. There’s the fragile family life of Chloe, a hint of seedy criminal activity involving Frank, Rachel’s own family problems, all of the high school drama going on with the other kids, and of course, Chloe coming to terms with her father’s death. All of these storylines are touched on in some way during episode two and the revelations of the episode to do with these were a great accompaniment. One element in particular, Chloe’s weird dream-like moments with her deceased father have piqued my interest. Not only do these suggest Chloe’s psyche is unstable, but they certainly give the impression that there’s more to it all than meets the eye. Hopefully, we’ll get our answers come episode three.

Before the Storm is at its best, though, when it’s focused on Chloe and Rachel. Seeing the two get to know one another, joke around, and share their burdens with one another is slowly but surely answering the questions fans still had by the end of the original series. Their relationship becomes more and more like the fairytale Chloe painted in the original series the more Before the Storm goes on.

Outside of conversations with Rachel and the other citizens of Arcadia Bay, most of episode two’s story focuses on Chloe helping out Frank the drug dealer. However, this doesn’t actually kick off for quite some time, and the opening section of episode two can be a bit of a drag to get through as it focuses on you simply finding bits and pieces around the junkyard. When you do embark on the adventure with Frank, though, things pick up a bit, and while there are certainly immediate consequences for your actions here, it also serves as a friendly reminder.

Arcadia Bay is a small town, and that makes going about, being rebellious, and getting involved with drug dealers incredibly problematic. Everyone in the town has a problem they’re trying to deal with or a secret they’re trying to hide, and being a naive teen filled with angst just means you’re going to get caught up in all of this at some point. Doing so feels treacherous and I found myself constantly worrying that a wrong decision would really mess up Chloe’s future. Some of the impact is softened, however, with this being a prequel. We already know the fates of its main character, but regardless I still found myself overthinking how each decision might come to bite Chloe and her short-term aspirations in the ass.

In that sense, decisions still feel incredibly tricky. I second-guessed myself, stared blankly at the screen, and repeated my mantra of WWCD (What Would Chloe Do). Even a decision you think is inconsequential could have a sting in the tail, and after finishing the episode once, I’m tempted to go back and change my decisions ahead of episode three. That’s not only a merit to the complexity of the decisions in Before the Storm’s second episode, but to how easy it is to immerse yourself in the world and really care about these characters.

Not everything is all doom and gloom, though, and Deck Nine has managed to capture Chloe’s personality perfectly in a number of fun little set-pieces and one-liners. Be it setting the table, awkwardly talking to parents or figures of authority, or getting involved in something typically “not Chloe,” episode two does a great job in reminding you that Chloe really is just a teenager. She doesn’t have all of the answers, she’s confused, and she’s rebellious, but deep down, she’s just a kind-hearted kid that wants to have fun.

Episode two ends with just the right amount of suspense and major reveals that you’d expect from a Life is Strange game. The reveal was exciting, albeit a little predictable if you tap into the clichéd nature of the series. Even so, as the credits rolled I was once again hyped to dive into the next chapter of the series and see what Deck Nine has in store for us.

In terms of performance, Before the Storm episode two actually ran great. Since the release of episode once, the game has been updated to support the PS4 Pro, with 4K textures and a much smoother experience all-around. Unfortunately, we did have a few issues with subtitles lingering for longer than they needed to, or popping up when they shouldn’t have. It’s not going to be an issue for everyone, but for those who like subtitles or depend on them, this can make it a little more difficult to follow the trail of dialog.

There are a lot of little stories going on in Before the Storm, and each one of them has me hooked and I can’t wait to see how they all come to an end in episode three. If episode one introduced us to the Rachel and Chloe’s relationship, episode two cracked it wide open, showing a more vulnerable and emotionally open Rachel from the closed-off one we were initially introduced to in episode one. Chloe and Rachel’s feelings run deep, and knowing the tragic ending that it all comes to, Before the Storm is certainly doing its job, making players empathize with the pain Chloe was clearly feeling in the original series. With the stage set for the finale, Before the Storm has the chance to be another special Life Is Strange series.