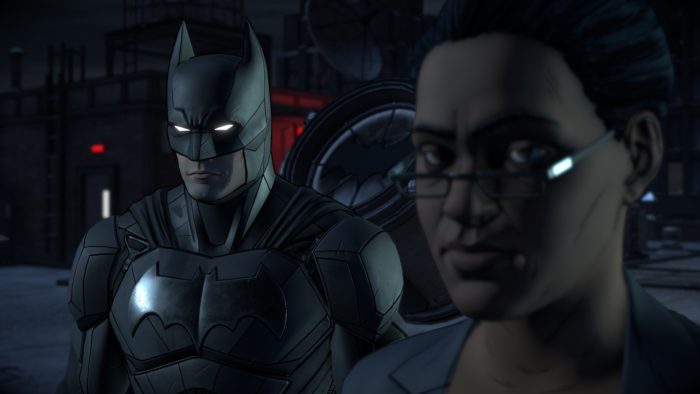 Batman: The Enemy Within – Episode 2 on PC

After getting over the devastating death of one of Batman’s most beloved allies last episode, and narrowly saving a couple of agents from the Riddler’s grasp (with one dying in the process in my case), there’s no rest for the weary. Enemy Within’s second episode, titled The Pact, kicks off right after the shocking turn of events from the previous episode, and Batman is forced to head to the GCPD arsenal to confront the rest of the Riddler’s friends.

This is where we get our first look at Telltale’s take on Bane. As you might expect, he’s a brutish man with a wrestling mask on his face, and he powers himself up by injecting his neck with venom. Bane’s introduction in the game is well-done, and he’s set up as an intimidating force to be reckoned with. Even Batman has a difficult time keeping up with him, and it’s not long before the caped crusader is beaten to a mushy pulp at the hands of the seriously jacked up villain.

The Pact is an interesting episode. While it does introduce some intriguing dynamics in the story, it also ignores what seemed like a really important thread that was prevalent all throughout the previous one. The rivalry between Gordon and Waller has all but fallen to the wayside here, and the choices seem to fall largely in Waller’s favor because of how the story is structured. As much as I tried to get back into Gordon’s good books this episode, the story just wasn’t ready to go there yet, making some of my decisions feel contrived. It’s a classic Telltale trap; you can make decisions, but only the game gets to decide when they actually matter. This wouldn’t be such a big issue if it hadn’t been set up as such a big deal in The Enemy Within’s first episode, but here we are.

On the other hand, the new character dynamics in The Pact are almost enough to make me completely forget that Gordon-Waller rivalry even existed. Bruce’s friendship with John Doe grows ever deeper as we finally learn that he’s a part of Riddler’s gang, and he has every intention of introducing them to us. Harley Quinn also finally makes her appearance here, and there’s a wonderful segment with the three characters where Bruce has to balance between trying to earn Harley’s trust, but also being careful not to respond to her flirtatious advances too much so that John wouldn’t get jealous and end up feeling alienated.

The friendship build-up between John and Bruce is the highlight of this episode, and the slow burn is exciting to watch. John holds a genuine sense of respect and admiration for Bruce (and Batman, as we’ll soon find out), and I opted to reciprocate those feelings as Bruce as well.

The Pact also does something a little different and a little more daring. For the majority of this episode, players are forced to play as Bruce rather than Batman, which is a refreshing change of pace. I found that the story got a lot more engaging while playing as Bruce simply because you didn’t have the option to just punch your way through complicated situations as they arose. With Bruce, players have to be careful in managing their relationships with other characters. After all, he’s the one with a reputation to uphold. He’s the guy with everything to lose.

However, as The Enemy Within introduces more villains, I fear that Telltale might be trying to cram too many personalities into the story. Mr Freeze made his debut appearance this episode, and while it’s pretty obvious he’s a character that’s going to eventually fade into the background (a shame), there are several other villains to contend with. Between Bane, Harley, and John, they’ve all got their personal motivations and backstories, and I’m not sure if three episodes will be enough to give these iconic characters the screen time and story they deserve. Why are all three of them even working together in the first place? Who knows? They just are.

As far as the story goes, things are definitely starting to heat up. Even as I chose to cooperate with Waller, it’s clear that tensions are starting to brew between Bruce and her. The episode came to a close with yet another exciting reveal, and the stakes are about to be raised. I’m just not sure if Telltale has the chops to pull every story development and important character (Tiffany Fox is still largely ignored in this episode too, by the way) and tie them together neatly and coherently.