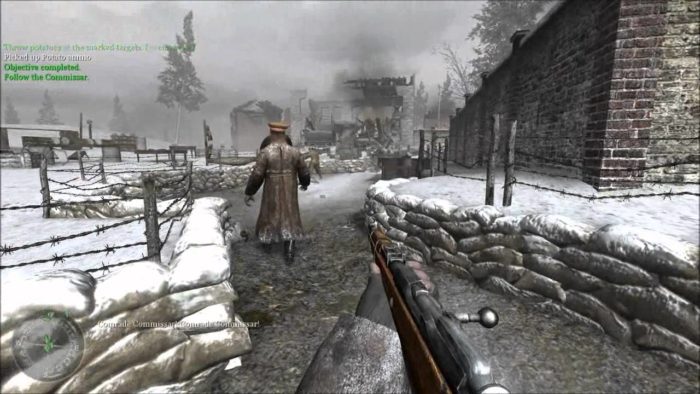 When the original Call of Duty released back in 2003, I was 14 years old. Though I had been gaming all my life up until then, the game still managed to shock and surprise me every time I sat down at Dad’s computer desk to play. My PlayStation copy of Medal of Honor was worn out by the time I graduated to Call of Duty, so when I started up a new game and got into it I was absolutely blown away by everything it accomplished. I never really got over that amazement, and I grew up on a steady diet of military shooters because of it.

Much of my infatuation and absolute adoration for the game came from not only the fact that it was absolutely excellent, but that it wove intricate stories around World War II, one of the integral slices of American history that intrigues me the most. So while I’ve enjoyed advancements in the series and the time it’s spent in the present and future, I’m delighted that Sledgehammer Games is taking the fight back to World War II, the time period that feels most believable and authentic for the series in general. Honestly, it’s probably the best move that could have been made at this point.

Developed by Infinity Ward and published by Activision, the original Call of Duty was in a league of its own. It not only felt fantastic, but kept me on the edge of my seat. Much of its source material came from real-life events that actually happened during the war, such as the Soviet Banner of Victory raised by soldiers on Berlin’s Reichstag building, signaling the end of the war.

Obviously it was a format that worked well for the series, as Call of Duty continued to explore World War II for its two follow-up sequels in the main spread, with Call of Duty 2 and Call of Duty 3. Call of Duty 2: Big Red One was a spin-off of Call of Duty 2, but also followed in the prior games’ footsteps, exploring the American 1st Infantry Division’s influence on the war.

Though games like Call of Duty: Black Ops took place during the Cold War and Vietnam war, sequels incorporated future warfare and explored updated threats, such as Infinite Warfare and games of that ilk. But here’s the thing. As tensions have mounted between countries around the world as I’ve grown older, I’ve found myself losing interest in how future tech can change the battlefield, and always end up taking refuge in the older games, where missions weren’t just raw and thrilling, but the real-life events that inspired them were captivating, serving as a harsh reminder of things that actually came to pass.

Don’t get me wrong, I’m all-in for trying out crazy new weapons and walking on walls, but there was a satisfying weight to firing a rifle back in the World War II games, a challenge to using iron sights, and a heavy sense of foreboding that made playing games set during the war feel like much more was at stake. Even multiplayer matches tend to carry more weight to them, a feeling of immediacy that permeates the whole game.

Watching players zip around the battlefield walking on walls and calling in drones while leaning on all the latest tech feels flippant, but taking things back to the beginning, as Battlefield 1 did, offers something that other shooters out there are failing to provide.

Call of Duty has always been about telling stories for me as much as offering satisfying gunplay, and while I’m grateful for the chance to peer into the future, the past is a place that still needs to be respected with quiet reverence. I can look around me now and see all the different ways we’ve invented to streamline combat by land, air, and sea. But I can’t go back to the past. Luckily, I can see it all with the newest entry, Call of Duty: WWII, which I’m really hoping delivers on the story front.