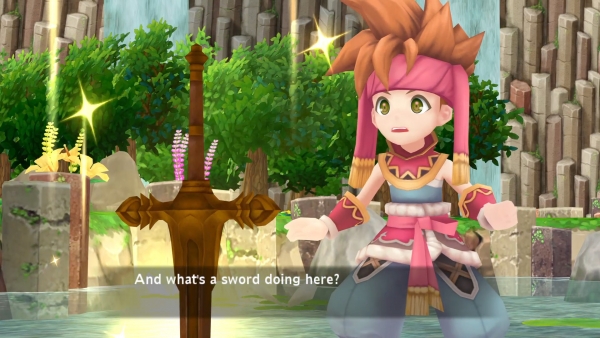 A pleasant surprise is in-store for nostalgic gamers familiar with the 16-bit era of Japanese role-playing games. Earlier this month and somewhat out of the blue, Square Enix announced that the SNES classic, Secret of Mana, would be given the full remake treatment. An all-new version of the game boasting 3D graphics is on the way to PS4, PS Vita, and PC next year on Feb. 15th.

The remake is very much staying true to the original game, only overhauling the aesthetic and adding voice acting. It will keep the top-down, isometric perspective, and it even features the adorable SNES soundtrack. The remake will simply transform the game from pixel art classic to high resolution modern stylized 3D graphics. Here, we’re taking a quick look at the comparison between the latest screen shots and similar scenes from the original game. Note that the original SNES screens are located on the left with the newer remake images on the right.

Here we see part of the Secret of Mana intro scene in which our three main protagonists trespass across the waterfall, right before one falls off and discovers the sword. Not that the pixel art of the original game isn’t pretty, but 3D graphics seem to do a better job of conveying cinematic cut scenes, and this famous scene looks a little less stiff in the updated version.

Dropping down into the water, here we see our hero picking up the sword for the first time. In the original game, the perspective doesn’t change or zoom in throughout the cutscene, but in the updated version there’s an all-new cinematic. Similar to the waterfall scene, 3D graphics add a bit more immersion to these iconic scenes and better highlight the expressions of each character. It’s cool to see the boy’s face light up as he grabs his sword for the first time, which was something left to the imagination in the original game.

This handy direct combat comparison in identical locations gives us a real flavor of what the remake looks like in action. The left image is actually the iPhone version of Secret of Mana, which was given a slight overhaul itself, though only to environmental assets such as the river. The key takeaway here is just how faithfully the remade version is recreating the original game. From the lillies on the water to the swing of the boy’s sword, it really is a like-for-like remake that sticks closely to the look and feel of the original.

Another combat comparison, the revamped game shows off a magic animation — effects that were present in the original but obviously weren’t able to be animated with the same level of fluidity. We’re expecting that the remake will turn up the dial on these effects and add little nuances that the 16-bit games weren’t able to.

Our heroes amid a village setting, these images show the texture difference on buildings, bridges, and grass. The pixel art holds up really well here and arguably looks even prettier than the 3D interpretation. Character models are undoubtedly capable of displaying a bit more emotion in 3D, but the original SNES Secret of Mana looks really vivid and interesting in its original aesthetic.

A reimagined Flammie is an exciting prospect, and though we don’t have direct gameplay comparisons yet, here’s a reminder of what the original looked like. The image on the right is surely taken from a cutscene, but it’s in-engine footage that gives us a sneak peek of what 3D Flammie is going to look like. Everything is looking really promising thus far, now we just have to wait until February.