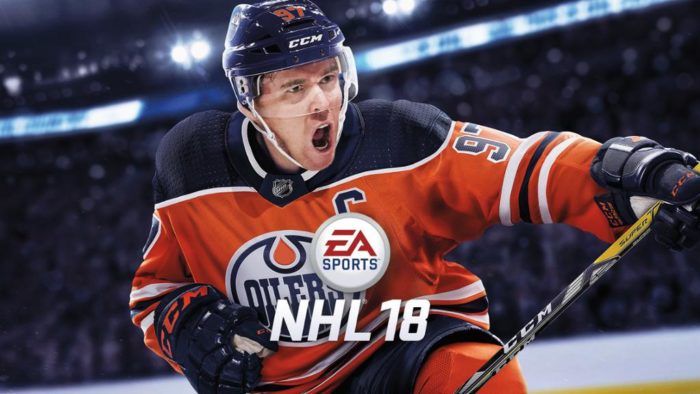 The annual NHL games are one of the few EA Sports franchises without any competition. FIFA has the continually impressive PES series from Konami and NBA Live has the hugely successful NBA 2K series to go up against. Yet NHL 18 is unrivaled in both good and frustrating ways.

NHL’s core ice hockey gameplay has always been strong. The skating and shooting feel smooth, you usually feel like you have full control over your passes, and, while defending can be tough, the strength of the poke check move can get you out of dangerous situations. There are also plenty of options for whatever standard of player you are. Whether that be the simple controls for newcomers or casual players, or complex deke mechanics for the veterans, you never feel out of your depth. EA has even included additions to aid players at both ends of that scale in NHL 18.

There’s a new training mode, led by members of Team Canada, that teaches you why and when, not just how, you should use certain moves. Then there is the tweaked deke system that allows for more complex chains and one-handed moves, and the defensive skill stick addition that allows you to be more precise when protecting your own net with the ability to block passing lanes and disrupt opposition moves. These gameplay additions, while certainly not revolutionary, give experienced NHL players more options to express their skills and help casual hockey fans feel comfortable with the flow of the game.

Away from the ice itself, there is just one major addition to NHL 18 that didn’t feature in last years iteration. Threes is a brand new mode that sees the action play out in 3-on-3 matches on small rinks, with the chance for action, big hits, and drama being heightened. The gameplay remains the same, it is just the rules of the sport that get an overhaul. The extra space allows for more spectacular goals, no face-offs after the start of each period keep the action flowing, and the money puck rule can see you leapfrog your opponent to take the lead from two goals down.

It is a fun, over-the-top mode that thankfully refrains from descending into being too arcade-y. Yes, there’s an eccentric, Monster Trucks style announcer and mascots often get involved in the matches in hilarious ways but it still feels like a fully fledged NHL mode. There’s a circuit mode that sees you take your Fridge Raiders across the United States, split-screen co-op, and online play. It is a great, unique mode for either the casual players to hone their skills in or for anyone else that fancies something a little less serious.

NHL 18’s other modes however, while mostly strong across the board, don’t feel as new or improved. Hockey Ultimate Team remains almost identical to NHL 17’s version, yet is still one of the game’s best modes as it allows you to construct a roster featuring your favorite players. You can collect cards, attempt to complete challenges, and test your skills against other unique teams from around the world. The consistent updates that will come throughout the next twelve months ensure that there will always be new goals to reach and possibilities to improve your line-up. HUT is supplemented by Draft Champions – the mode introduced last year that sees you add twelve players to a squad to face four teams in an attempt to win awards for the aforementioned mode. It’s an enjoyable alternative that essentially acts as a streamlined version of Ultimate Team and allows you to test out some of the most desirable or expensive players.

Franchise Mode is as deep as ever, offering you the chance to take charge of all facets of management. As your favorite team NHL team, as the new Vegas Golden Knights, or as an entirely new outfit, you set ticket and merchandise prices, monitor the morale of you key players, and renew contracts all while progressing through a season. There are small, welcome additions, such as mid-season contract negotiations but Franchise Mode essentially remains the great, go-to mode for hardcore hockey fans. EA Sports Hockey League also returns, allowing you to create a skater and compete online with friends. As it has always been, it is consistently enjoyable and is a great way of playing with friends without having to play one-on-one matches as you normally would.

All of those modes are fun, largely unaltered versions of what we’ve seen in other NHL games and EA Sports franchises but the game’s final mode, Be A Pro, is its most underwhelming. That isn’t due to the mode itself, which once again sees you take a young character you created from the Draft to Stanley Cup glory, but due to how behind the curve it is compared to other sports games. FIFA’s imperfect but promising The Journey is entering its second year, Madden’s new Longshot mode tells a surprisingly touching story, and NBA 2K18’s MyCareer is developing once again. All three of these are far more modern, cinematic, and enjoyable than NHL 18’s Be a Pro. It embodies what is frustrating about EA’s ice hockey game; the gameplay is strong, accessible and fun, yet it doesn’t match the advancements and innovations that are now a core part of other sports games. A substantial story mode, or something similarly unique, of the caliber of those we’ve played in EA’s other titles, is what would make NHL join its peers in the upper echelons of sports games.

It embodies what is frustrating about EA’s ice hockey game; the gameplay is strong, accessible and fun, yet it doesn’t match the advancements and innovations that are now a core part of other sports games. A substantial story mode, or something similarly unique, of the caliber of those we’ve played in EA’s other titles, is what would make NHL join its peers in the upper echelons of sports games.

That theme of great and underwhelming continues off the ice. Once again, the character animations are stunningly accurate, even to the point that it is easy to tell who is who when they have donned their hockey gear. The crowd is the best of any sports game I’ve played. The spectators are lively, varied, and help create an atmosphere that feels just like what you’d experience during any important real-world game. The NBCSN presentation overlays, while unchanged from previous years, are authentic and add to the atmosphere created by the rest of the game. Even the menu system is impressively presented. They’re well laid out, clear, and informative, and the ability to customize the main menu helps you sift through all those modes to quickly get to your favorite each time you play. The presentation is a standout feature in all of EA’s sports titles, and that is no different in NHL 18.

That being said, there are features that, while far from bad, are in need of an update. The commentators say the same, seemingly unconnected things they have for years, the pre-game city skyline shots of the game’s location are a distractingly low resolution, and the arms of both players and fans sometimes clip into each other. These issues don’t affect the gameplay but, like the other aspects of NHL 18 I’ve already mentioned, they feel too much like the same old thing.

I have a feeling that NHL 18 suffers from its lack of competition. While, as always, its gameplay is strong, its presentation is pretty much perfect from in-game to the menus, and there is plenty of enjoyable modes for all standards of players to sink their teeth into, the lack of substantial new features and innovation mean that it is a step behind even some of EA’s other marquee sports titles.