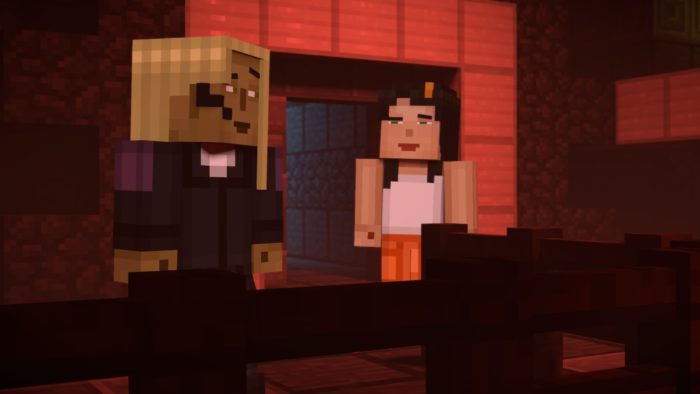 During our last outing with Jesse and friends in Minecraft: Story Mode, things took a turn for the dark when it was revealed that Vos wasn’t actually who he appeared to be. After the cliffhanger ending where the Admin came back to life and gave Petra the prismarine gauntlet, our heroes were thrown into the depths of the earth, imprisoned with the bedrock. While season 2 of Minecraft: Story Mode has been fairly lighthearted and comedic thus far, episode 3 (titled Jailhouse Block) gets quite a bit darker and a little less cheerful than what players have become used to.

After getting tossed into prison, we’re immediately introduced to a new and chirpy character simply known as the Warden. As his name suggests, he’s in charge of keeping things in order while the Admin isn’t around, and Jesse isn’t having any of it. Stella makes an appearance here too, and she’s also an associate at the prison who doesn’t waste any time in bossing Jesse around.

Episode 3 takes place entirely inside the prison, as we’re tasked with finding a way to escape. There are rumors of a mysterious Prisoner X who’s locked up at the very bottom of the place, and she’s been known to be an escape artist who attempts a breakout every so often. Jailhouse Block has players take control of Jesse as she meets the inmates that the Admin has captured, and we’re treated to a series of set pieces where we get to see the prison life that the Admin has created here.

There’s the Mush Room, where the inmates literally fight with each other over a single mushroom that spawns in the area every now and then. There are the zombie mines, where zombies are released into the area and the prisoners are forced to fight for their lives, while eating flesh to survive. Minecraft: Story Mode doesn’t really go into the gory details, but it presents the horror of the Admin’s actions and the threat he poses in an elegantly disturbing way. 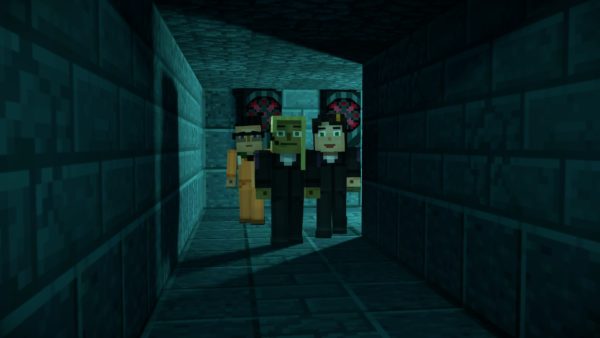 Much like the previous two episode of season 2, Jailhouse Block is very much centered around the themes of friendship and trust. Jack, the grizzled adventuring veteran, is shaken up by the events that have just transpired. After experiencing a brief flash of hope when reuniting with Vos, he was revealed to be the Admin in disguise, and Jack is clearly left shell shocked as he struggles to hold on to Nurm, the only close friend he has left. Meanwhile, the relationship between Stella and Jesse is as hilariously tense as ever. It’s clear that Stella has an unhealthy lust for power, evident from the fact that she chose to side with the Admin even if you saved her in the previous episode. And yet, this time around, we get a glimpse of some of her insecurities as her shell begins to crack.

Jailhouse Block excels at illustrating the dynamics between all of these characters, and it all comes to a head when the player is finally presented with a heartbreaking choice near the end of the episode. Now, as I’ve mentioned in my episode 1 review, I found it hard to care too much about the decisions I was making, as my experience with Telltale games always proved that your choices (no matter how major they might seem) often never amount to any sort of big payoff in the story. And yet, Telltale managed to hit it out with the park with this one crucial decision. After setting up its message about friendship and camaraderie, this decision forced me to pause for a good five minutes as I tried to foresee the possible outcomes and consequences. With the way it was set up, I sincerely hope that this decision has far-reaching consequences, especially when you take the character relationships into consideration.

Minecraft: Story Mode season 2 is shaping up to be a really strong adventure. Aside from a few painful combat sections that dragged on too long this episode, the story is starting to get serious now, and I’m certainly looking forward to see where the last two episodes take us.