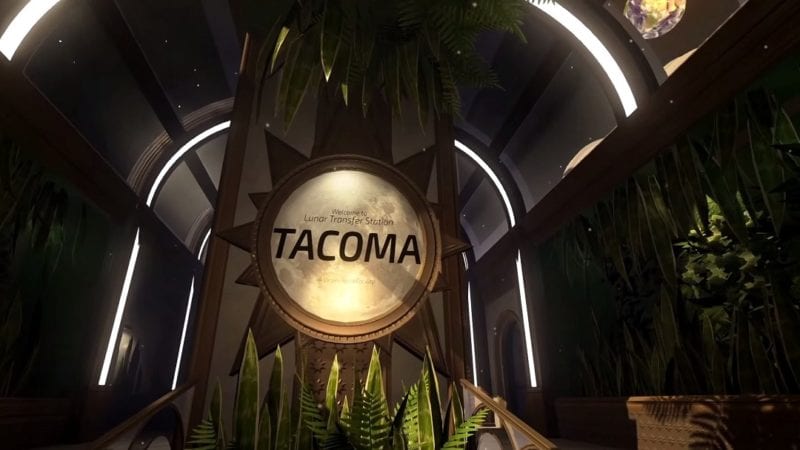 After Gone Home released to critical acclaim back in 2013, all eyes were on Fullbright when it announced Tacoma. Could the developer craft another excellent narrative-driven experience without it wearing thin? Well, having reached the end of the game, I can confirm two things. Tacoma offers up a story just as enthralling as Gone Home, and it also successfully unleashed my inner busybody. A locked gym locker here, a padlocked drawer there. All were hiding another piece of the giant puzzle that was Tacoma’s story, and I couldn’t stop until I’d slotted the final piece firmly into place.

Fullbright opted to move away from the grounded setting of Gone Home’s Greenbriar family home, instead flying players up to the Tacoma space station some 200,000 miles away from Earth. Players are placed in the shoes of Amy Ferrier just as she’s docking to Tacoma to complete an AI transfer process. As such, you’ll have to explore each of the different areas, locating the access points and downloading the necessary data. However, thanks to ARDware – Augmented Reality hardware that allows Amy to watch AR recordings of the crew members – you’ll see how the crew lived and worked, and uncover the station’s dark secrets.

The way in which these AR recordings play out is one of the most interesting and enjoyable aspects of Tacoma. Thanks to these being basically 3D reruns of the events that happened, you’ll have to rewind footage to make sure you caught everything. Just because two people walked off doesn’t mean they’re out of the picture. They could be having their own separate conversation, providing a different perspective on what’s unfolding or voicing their concerns to a fellow crew member and confidant. This AR tech also gives you the ability to access the crew members’ AR workstations on occasion, allowing you to uncover salvageable snippets of corrupted messages or email conversations they were having at the time. There’s often so much going on in these AR reconstructions and a ton of information on offer that it doesn’t take long to find yourself consumed in the story. How much you uncover of this story, however, will come down to just how inquisitive you are.

Tacoma doesn’t lay every strand of its story out for you to watch in AR recordings. Sure, you can speed through your mission and get the gist of what’s going on, but you’d be missing out on a lot of context and smaller stories not fully explored through the main AR recordings. Only through properly exploring Tacoma’s entirety, jotting down passcodes or hunting down the key for a locked drawer does Tacoma really open itself up. Every so often, you may come across a calmer, quieter moment reconstructed for Amy to view in AR. A reconstruction of one of the crew members simply enjoying some private time, playing their guitar, or hanging out with a fellow crew member playing a game. Though these aren’t driving the story forward, they add character and personal depth to these mesh reconstructions of humans walking around you. They become people with families, relationships, aspirations, and personal burdens. Tacoma isn’t just a story about what happened on the space station or Amy’s mission, but about the dynamics of work relationships, ethical issues, and what AI means for us in the future.

Thankfully, exploring this futuristic space station is just as interesting and immersive as you’d expect from Fullbright. There’s a surprising amount of novel tiny details here, making exploration and interaction in the space station more enjoyable. I found myself potting all the balls on a pool table just because I could, or throwing nuts and bolts and watching them float effortlessly in zero gravity before clanging against the metallic walls. Fullbright has stopped at nothing to ensure that Tacoma feels like a real-life possible future. The sound design is superb with futuristic beeps, boops and whirring emanating from hi-tech machines, while just about every object you pick up has its own distinct sound if you throw it to the ground. The voice acting here feels just as solid as the rest of the experience. Without looking at the body language of the mesh crew members, it’s easy to tell how each of the characters are feeling thanks to the naturally emotive way the lines are delivered.

Unfortunately, despite being in this fantastic environment with a riveting story that kept me hooked throughout its three-hour duration, technical issues hindered Tacoma from realizing its true potential. When first starting the game or loading my progress, it took me roughly two minutes to load the game and return to the action on a PC that surpasses the game’s recommended specifications. While this could be forgiven if Tacoma was delivering cutting-edge visuals, it’s not. That’s not to say it looks bad, but for the visuals on offer, a two-minute load time just doesn’t quite add up. On top of that, there was also a number of noticeable framerate drops, particularly when moving from section to section of the space station. Considering “walking simulators” such as Tacoma are all about telling a story within an immersive experience, it’s disappointing to be dragged back to the real world by technical issues when the rest of the experience is so darn good. Hopefully, this is something that can be cleared up with a patch, but in its current state, consistent performance is a problem for Tacoma (on PC at least).

Looking beyond the slowdown, however, Fullbright has once again delivered something that feels more like an experience than a game. Its story is multifaceted with tidbits scattered throughout the station just waiting to be picked up and pieced together. Reconstructing AR clips to follow the story along is a novel and unique means of storytelling, and combining this with the exploration and world interaction that we saw in Gone Home feels like an evolution of the story-driven gameplay we saw back in 2013. If you’re looking for sci-fi action and alien blasting, you might want to look elsewhere. But if you’re in the market for a fascinating narrative and an intriguing space station to lose yourself in, you could do a heck of a lot worse than Tacoma.