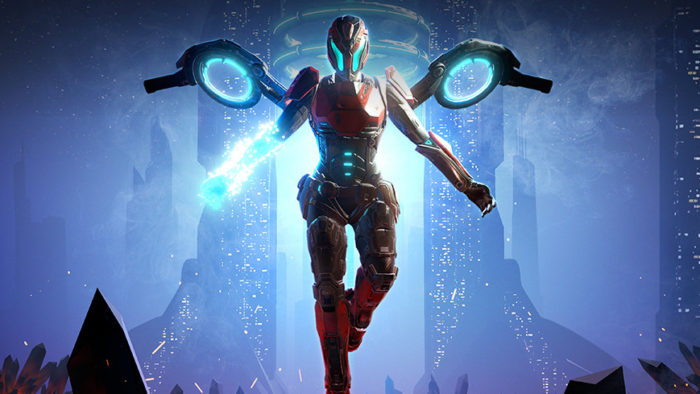 Matterfall is a real mixed bag. It made me go to that next level of focus. The one where your hand-eye coordination becomes something abnormal and you zone out absolutely everything else. But then it also had me frustrated. Frustrated that it couldn’t keep this up throughout it’s short duration, or give me a reason to return once the credits rolled. Matterfall definitely has the DNA of a Housemarque twin-stick shooter, but it doesn’t quite reach the heights of its predecessors.

Matterfall takes the developer’s prestigious twin-stick, high-score chasing action and mixes in some futuristic platforming for good measure. The game takes place in some distant future where a war has broken out between humans and machines over a material known as ‘smart matter.’ There’s not much else to the story, simply giving the nightmarish bullet hell that lays in wait some context. You’ll use the ‘smart matter’ to create platforms and manipulate your environment all the while blasting every machine in plain sight. Throw in the ability to dash, stun, and slip through these platforms all with one button and you’ve got a recipe for some serious, shooting fun.

At times, Matterfall achieves this. With the thumping soundtrack carrying me through, there were moments where I couldn’t help but smile at the millions of particles littering the floor. The remains of the metallic husks that had just been obliterated by a lethal dance involving lasers and my overcharge. Using the Strike – a dash-like ability that freezes nearby enemies in place – is particularly enjoyable to use, allowing you to effortlessly immobilize waves of enemies before lighting them up with your weapon. It becomes an invaluable tool in the later levels where the game is relentlessly flinging projectiles and enemies in your direction.

It’s strange, then, that there’s no ‘stamina bar’ or prompt of any sort to let you know when it’s recharged and ready to go again. To add insult to injury, the recharge rate felt unpredictable. Sometimes I was able to nail a slick sequence that left my enemies in a fine dust of pixels, other times I pressed the button and was left watching enemies plow into me. For a mechanic so crucial to the experience it’s baffling that it’s just about the only thing Matterfall doesn’t notify you of. It led to some frustrating deaths, forcing me back to the last checkpoint I hit. This wouldn’t be so bad had the space between them not been so great, or at least, not filled with dull, tedious platforming sections. 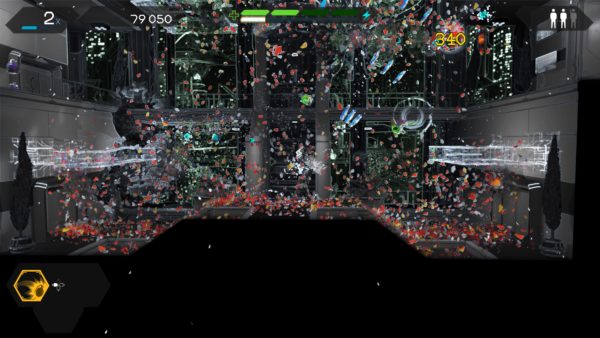 It’s clear that Housemarque wanted to try something different with its twin-stick expertise, but the delicate platforming feels awkward and out of place amidst the frantic action fans have come for. This is in part down to the heavy controls. For someone in a futuristic, hoversuit, there’s no sense of urgency in the way your character moves. Everything feels too clunky, which makes what should be a simple blast over some platforms a real trial of your patience. Speedrunners and high-score chasers will surely relish the challenge of stringing together complex chains of dashes, jumps, and forging platforms to set the new record, but for everyone else, they simply act as speed bumps throughout Matterfall’s very short span.

There are 12 stages on offer in Matterfall divided into three sets of three levels with a boss battle at the end of each. These boss battles are by far the most exciting and intense moments of Matterfall, pitting you against towering machines capable of filling your screen with projectiles and enemies. Though not memorable in design, they simply allow Matterfall to do what it does best, without any of the padding. You’re still not free from the niggling frustrations of the controls and finicky Strike mechanic, but the badass feeling of carving a path through incoming enemies and projectiles before unloading your Overcharge ability to finish off a boss more than makes up for it.

Alas, once the final boss has been toppled, you’ll likely be done with Matterfall. Aside from the online leaderboards, there’re no different challenge modes as seen in previous Housemarque titles. As a result, Matterfall almost feels barebones and some may be disappointed in the value for money they get.

While I have to tip my hat to Housemarque for trying something different, Matterfall feels more like a side project than a proper release in the developer’s esteemed lineage of twin-stick shooters. The controls lack the same level of slick polish, the main experience is short, and there’s little to keep you coming back. Despite offering up some compelling bullet hell action, its platforming sections slow down the action, making me reluctant to ever boot it up for an evening of high-score chasing over Resogun. If you’re a dedicated Housemarque fan, you’ll still likely find something to enjoy here, but if you’re looking for the studio’s best work, you’ll have to look elsewhere.