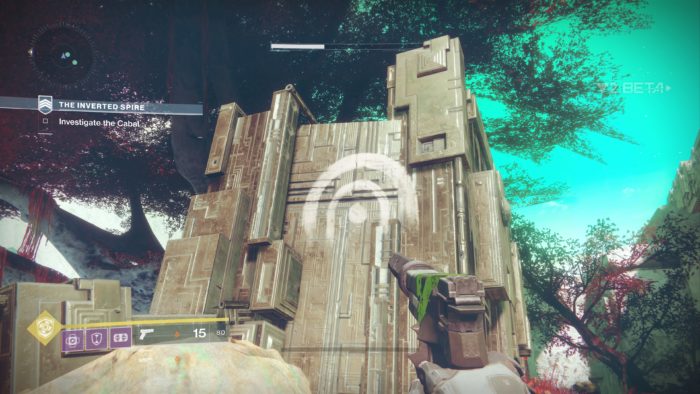 The Destiny 2 beta has started rolling out, beginning with the PS4 closed beta which went live earlier today. Compared to the beta for the first game, Bungie is playing things a lot closer to their chest. There’s nothing really in the form of free roam, but you can go off the beaten path in the Inverted Spire strike that’s available to play. From the spawn we turned around and went the opposite way of the objective and what we found was a mysterious mark:

If you’ve been following Destiny 2 since its reveal, this will be quite familiar as it’s the mark of a Dark Sector, side excursions that promise new challenges and sweet, sweet loot. We decided to follow the path next to the mark which led us to another symbol, this time on the side of some stone:

If we were betting people, we’d say we were definitely onto something, which we strongly believed after continuing. Upon exploring a little further, we found a set of doors that looked exactly like those that opened up to us shortly before facing Atheon in the Vault of Glass. The doors seemed innocuous enough, with no further markings nearby, but upon closer inspection we could actually hear something on the other side – mechanical noises that we didn’t find anywhere else.

With the doors unable to be opened, we figured all hope was lost, but Bungie, and Destiny 2 by extension, gave us more to take in and now we’re wondering if there’s some hidden puzzle. In the area directly across from these doors, between the locations where we found the Dark Sector symbols, are these portals that spawn. They can only be powered by killing the Quantum Goblins nearby. The portals work like jump pads, but they’re in a circle that doesn’t really lead anywhere. Normally, I’d say they’re just weird spawns, but after killing all of the Hobgoblins and activating the portals, Storm Minotaurs (which are quite powerful) spawn in front of each portal.

When you kill the Minotaurs, though, the portals fade and a loud screeching/grinding noise can be heard, as if something was done wrong. So now we pose a question to you, Guardians, is this a puzzle, and can you solve it? We’ve tried tons of methods – specific orders, doing everything at once, attempting to use the portals without touching the ground – yet we end with that same grinding noise.

Now it can just be that it’s disabled for either the strike or the Destiny 2 beta in general, but it’s not going to stop us from seeking out more secrets. Let us know if you figure something out, or if you find something else that strikes you as interesting.