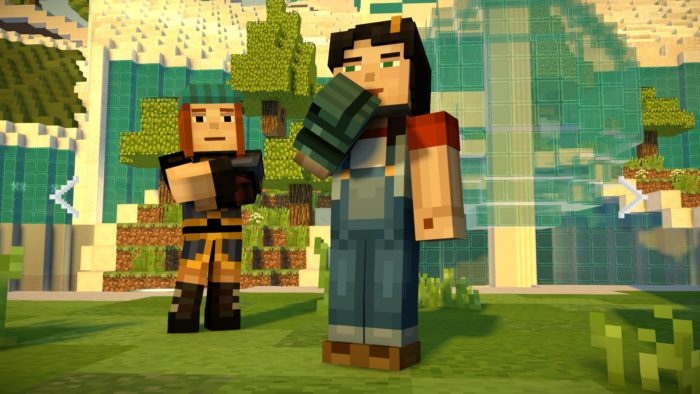 Hot off the heels of The Walking Dead and Batman, Telltale Games has wasted no time in pushing out their latest and biggest point-and-click adventure game. Minecraft: Story Mode is back with a second season, and it’s certainly a very welcome, and very refreshing change of pace from all the doom and gloom of Telltale’s recent titles.

Following the events of the first season, Jesse and her friends are now revered as the heroes of the New Order of the Stone. Jesse now resides in Beacontown, where she’s known as the hero in residence, but in actuality, everyone looks to her as the boss or the mayor. Things have changed ever since Jesse and crew brought down the Witherstorm, and everyone has settled down in one way or another. Lukas, Axel, Olivia, and Petra have all pretty much gone their separate ways, though they still remain friends despite the physical distance between them.

But because this is an adventure game, things don’t stay calm and peaceful for very long. After going on a mine spelunking adventure with Petra and a very grumpy llama named Lluna, Jesse finds a mysterious prismarine gauntlet that whispers her name. A large hole also appears in the ground, and it spawns thousands of creepers that threaten the well-being of Beacontown, so it’s up to Jesse to close up the Heckmouth as they call it, and uncover the mystery behind this new gauntlet.

Full disclosure here: I never had the opportunity to play the first season of Minecraft: Story Mode. Aside from a quick skim through the game’s wiki pages, I’m not all that acquainted with Jesse or her friends. Even so, season 2 continued to feel welcoming to me as a newcomer. There are clear references to the events of the first season, but for the most part, it looks like series newcomers can safely embark on this new adventure without feeling too alienated. It definitely helped that half the crew accompanying Jesse during this first episode was made up of new faces, too.

The game’s own charm and humor were persistent throughout the episode as well, and the talented voice cast definitely helped to bring life to some of the more charismatic characters. The banter between Jesse and Petra is a true highlight, and the dynamics between the two (and the implications for the rest of the group) were interesting to watch unfold, even from the perspective of someone who was just entering this world for the first time. Newcomers Jack and Nurm supply the comic relief in healthy amounts, flipping back and forth between self-serious dialogue and deadpan humor. Depending on how you play Jesse, her interactions with other characters can result in a lot of comedy as well. One particular highlight of the episode comes from an encounter with Stella, the mayor of Champion City, an insufferable and obnoxious woman who views Jesse as her sworn rival even though the two have never met. Stella didn’t get that much screen time this episode, but her lines and delivery are so haughty and witty, making her a real joy to watch as the story unfolds.

The game doesn’t feel as genuinely humorous as Tales from the Borderlands, which I regard as Telltale’s best episodic series yet, but it definitely proves that the creative minds over at Telltale can put together a solid, lighthearted, and entertaining story when they want to.

Minecraft: Story Mode season 2’s debut episode is a fairly lengthy one, and I clocked just under three hours trying to explore all of the available environments. The episode brings an end to a very brief but satisfying story arc, while also wrapping up with an epic cliffhanger conclusion that leaves you wanting to find out what happens next. It’s a very textbook story structure, par for the course with other Telltale games. Whether it manages to maintain that fast pacing and witty writing for the remainder of the season, though, remains to be seen.

Outside of that, Minecraft: Story Mode comes with all the bells and whistles you’d expect from a typical Telltale game. You’ll make dialogue choices in conversations, there will sometimes be critical story decisions that determine how the plot plays out, and there are quick time events. Unique to Minecraft is the ability to find materials scattered around the world, and using a crafting table to make a new item. These are all arbitrary of course; all the items that you can craft are scripted, and they only serve to help you progress through the story. There’s nothing you can craft that will really change the course of the story or affect how you approach certain situations. In this episode alone, I was given the option of crafting either a cake or a pumpkin pie, or go scavenge for materials so I can craft both. I ignored it completely. Aside from a brief one-liner mention about the food headache later on in the game, there was nothing to suggest that my decision really mattered at all.

As the years have gone by, I’ve found myself playing with increasing recklessness in Telltale games. Perhaps it’s the result of being jaded at realizing that your choices don’t truly affect the characters or story, but I couldn’t help but feel the same way as I played through Minecraft: Story Mode. Sure, it’s only the first episode, but already so many of my ‘critical’ decisions are starting to feel inconsequential in this episode alone. The game tries to convince you otherwise by repeatedly telling you at the top of the screen, “Your story is changing,” but it honestly doesn’t do much to inspire confidence. That said, it’s a sad truth that I’ve slowly grown to accept, and if Minecraft can keep the charm and wit going for the next four episodes, this won’t be much of a problem for me at all.

Story and good writing aside, I am sorry to report that Minecraft: Story Mode does suffer from a few technical issues on PC. The ‘white screen’ problem is back, meaning that messing around with the game’s resolution can cause it to freeze, giving you a white screen whenever you boot up the game in fullscreen mode. And those wanting to play the game on PC with their Xbox One controllers will have to run it in admin mode to get it working properly. These are small problems that can be fixed fairly easily, and the game isn’t held back by any damning crashes or horrible frame rate drops, but it’s baffling to see these same issues that have been present in most of Telltale’s games from the past still rearing their ugly heads in this latest title.

Overall, Minecraft: Story Mode season 2 kicks off with a really strong debut. The writing and characters are sharp and humorous, and the story has me intrigued so far. I’m still very skeptical about your choices really having consequences in the game, but who knows? Maybe they’ll have an actual impact on events this time.