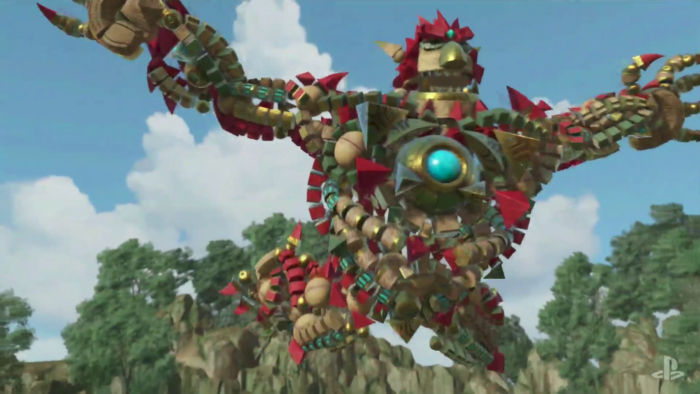 Knack was the first game I bought for my PS4, and it wasn’t exactly the best game to welcome me into the next generation of consoles. The story was cliched, the platforming was all right, and the combat was laughably shallow. The game was extremely average, and I certainly didn’t think we’d see it again after that first outing.

Fast forward to 2017 and suddenly, we have a Knack sequel in the works. Knack 2 retains that charming cartoonish finish, but polishes its core mechanics to a pretty shine.

The game supports local and online drop in/drop out co-op, and jumping in locally is as easy as just turning on a second Dualshock 4 and hitting a button – something I found out rather quickly as a Sony rep hopped into the game with me. Dropping in and out of co-op is supposed to work just as seamlessly when you’re playing with other people online as well, he assured me, but the game was clearly crafted for local play.

The basic controls are relatively simple; there are buttons for punching, kicking, and jumping. Mash the punch button enough, and Knack will go into a punching frenzy. You can double jump as well, and if you hold down the jump button while in the air, you can glide for a few seconds. Attacking from the air also allows Knack to perform different moves, making combat a lot more varied.

That said, the combat only truly shines when you’re playing with a partner. In the first game, your co-op partner couldn’t gain extra parts. But in Knack 2, your partner grows with you, and also gains the ability to drop and reform parts whenever they want. And, if you perform any types of punch and kick combos while standing near your partner, Knack will automatically fire off parts like bullets from the partner’s body, hitting any foe in sight. Think of it as a little machine gun that only fires bullets when you punch or kick frantically. And if you perform a belly flop onto your partner’s body, you create a small explosion that knocks enemies back. The co-op elements in the first game felt extremely tacked on, but Knack 2 improves upon that aspect in every way, making the game an utter joy to play with a friend.

Players will also now be able to block attacks and parry projectiles. I asked if you could parry regular melee attacks, but unfortunately, the answer is no. Still, a block and parry mechanic does keep Knack 2’s combat feeling varied and exciting, and it is leagues ahead of the shallow gameplay from its predecessor.

The platforming feels as precise as ever, and it’s certainly helped by the gliding mechanic, and the fact that the game runs close to 60 frames per second at 1080p. I didn’t experience any major frame drops and slowdowns during the demo, and the platforming and jumping was really fun with how fluid everything felt.

As you progress through the game, you can gather shards and orbs and get permanent upgrades for your abilities. I didn’t get to see any of that in the demo, but everything looks promising nonetheless.

Knack 2 improved upon the big areas where its predecessor fell short – awfully shallow combat, and the pointlessness of the game’s co-op functions. I’m not sure if Knack 2’s story will be able to capture my attention or if it’ll fall flat like the original, but for now, everything else is enough.