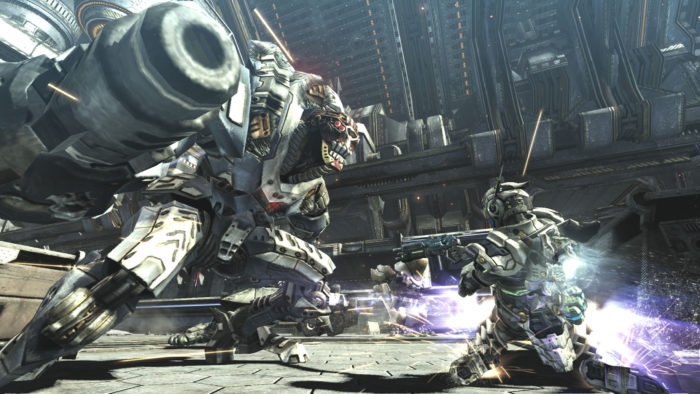 Platinum Games has become well known for their fast-paced action games, and yet, there’s one title that really takes that idea to the extreme, Vanquish. After years of waiting PC fans will finally get their hands on the game, with 4K support and an unlocked frame rate. To this day, there isn’t really another experience like Vanquish, a hyped up and absurdly fast action experience. Even so, with how much technology has changed since the game’s release, it’s the perfect time for Sega to bring us a Vanquish sequel.

On its face Vanquish may look like another sci-fi shooter, however, it’s anything but. The title casts you as Sam Gideon, a DARPA agent equipped with an Augmented Reaction Suit that superbly boosts his battle power. The suit is really where Vanqish shines, as it comes equipped with rocket boosters that let you slide around the battlefield at blazingly fast speeds. Vanquish already runs at a speed that feels much faster than other shooters, and enemies incorporate elements from bullet hell games as they pepper you with fire.

You can take cover and blind fire like other third person shooters, but the real appeal lies in sliding around with your suit. The way that Vanquish incorporates this mechanic makes it incredibly distinct from other shooters. While you have the option of taking cover, Vanquish really becomes a game of cat and mouse. You want to slide around to the best vantage points, get as close as you can to enemies, and zip back out if you get overwhelmed. It also helps that Vanquish incorporates a strong melee combat system, letting you wreck enemies up close and personal. Of course, the game also diversifies things by giving you a varied set of ranged weapons that can cause some serious chaos.

The key to all of this is the ability you get to slow time as you slide, letting you pop exact shots on enemies as you fly by, almost making you feel like a super hero. Of course it helps that the game is technically sound and runs without a hitch, even as you slide through explosions and hordes of enemies. The art style of Vanquish also helps to give it a distinct anime-like style, which only adds to the over the top action happening on-screen.

Video games often take steps to empower players and make them feel special, but Vanquish is the epitome of that idea. Sam is the only one on the battlefield that has this power, although enemies oftentimes have their own special abilities. The arenas you go through in the game are specially designed to accommodate your abilities, and after a while there’s almost a rhythm to battles.

Vanquish’s story works entirely in service to its gameplay, as it’s just as utterly ridiculous as what you play. The game never tries to take itself seriously and absolutely knows what it is, a crazy high-octane action experience. After all these years, no other game has really tried to copy Vanquish’s mechanics, slightly baffling considering they worked so well. The combination of bullet hell shooting, beat em up, and the sliding mechanic gave the title a distinct feeling.

However, it should also be noted that Vanquish is demanding, enemies are relentless, especially on higher difficulties, and if you don’t try to master the game’s systems you’re going to have a rough time. Once you do fully grasp everything, however, you’re provided with one of the most satisfying and empowering shooter experiences around. It helps that the campaign is relatively short, opening up challenge maps afterward, and always keeping the focus on the action.

With Vanquish’s unique blend of gameplay, it’s just begging for a sequel, another chance to jet around the battlefield. Better hardware and advancements in action and shooting games mean an experience that could be even bigger and better than the first.  Platinum has gone on to develop many other titles over the years, most of which have been received well. Titles like Metal Gear Rising, Bayonetta 2, and NieR: Automata are all memorable for the absurd levels of action they have, including some majorly impressive set pieces.

The hardware of modern consoles could truly allow Platinum to work wonders with a new game. Take for example something like Horizon: Zero Dawn, a game that features an engaging battle system that allows for some great player freedom during hectic battles. It’s an example of what a Vanquish 2 could look like, with giant robotic battles in some huge spaces. They are, of course, very different games and a Vanquish 2 would be a much more focused experience, but Horizon still serves as a good blueprint of what could be possible.  The bullet hell gameplay of NieR: Automata also serves as another example of how hectic and challenging another Vanquish title could be.

We have the ability to render larger worlds than ever before, with more detailed and plentiful characters. This isn’t even to mention 4K capabilities on the likes of PS4 Pro and the upcoming Xbox Scorpio. With the cancellation of Scalebound, Platinum doesn’t have much that we know about on the horizon. Interest in Vanquish is going to be renewed with the PC version, and it may be the perfect time to make a move on a sequel.

It’s a shame that seven years later there’s nothing else on the market quite like Vanquish, but it’d be even more of a shame if we never saw something like it again.