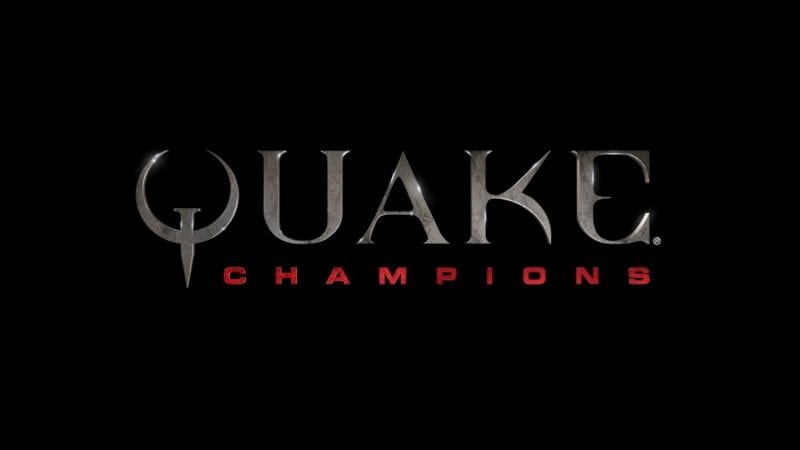 Quake Champions knows exactly what it is. It’s a return to form. Quake is finally back and even though the inclusion of characters and abilities change things up a bit, the classic series is still as fast-paced and frantic as ever.

As a modern twitch shooter, Quake Champions checks all the right boxes. Player movement is fast and responsive. Reloading is absent entirely. Accuracy is key. Hit-scan weapons will get the job done, but proficiency with projectile weapons is what separates the men from the boys.

There are only six main types of weapons, but different versions of each allow for more variety and the small selection makes it easier to master each gun in case it’s the only pickup you stumble upon early in a match. Each firearm feels punchy and responsive. The Heavy Machine’s good for picking enemies off at the beginning of a match and stealing kills in multi-man scuffles, but it isn’t as powerful as other tools in your arsenal.

Weapons like the Super Shotgun are great for tearing through enemies and making short work of groups, while the trusty Rocket Launcher is still reliable for gunning down an enemy in a shot or two if you can line up the reticle fast enough.

At the beginning of every match, you can choose between the Machine Gun, Shotgun, or Nailgun, and then pick up whatever weapons you find strewn throughout the map. It’s a simple system that puts everyone on a relatively even playing field.

The choice that actively changes how you interact with others during a match is which champion you decide to roll with. Each one has a different health, movement, or speed stat and a unique ability. It’s important to choose a champion whose stats fit your play style. I like to get around a map quickly and rush in to deliver some quick shotgun bursts so a champion like the hoverboard-riding Anarki worked wonders.

All of the champions I sampled in my time with the beta were fun to use and versatile, but the ‘pay to unlock a champion permanently’ system means that you may have to shell out a couple of dollars if you want to be able to use any character at any moment. Outside of the characters themselves though, all of the microtransactions were for cosmetics so they didn’t detract from the gameplay itself.

The new abilities are incredibly useful and each one can help change the tide of battle in an instant. But when you get down to it, Quake is still all about the shooting. If you don’t have a snappy trigger finger, you’ll find yourself being fragged time and again. The abilities range from healing to rushes but each character only has one so it never becomes overwhelming.

In addition to armor and health power-ups littered throughout the map, you can also pick up yellow hourglasses that decrease the cooldown on abilities, allowing you to make use of them more frequently.

While it was fun trying out the champions and their respective abilities, the core shooting is still Quake’s strongest aspect. Leaping and dashing through the gorgeously designed maps and peppering opponents with bullets until they explode in a hail of blood and gore never ceases to be satisfying. The movement is incredibly precise and intuitive. The precision of the mouse and keyboard layout immediately illustrates why Quake Champions still hasn’t been announced for consoles; the game is all about quick kills.

The game still has a few kinks to work out, such as balancing some of the weapons a bit better and ensuring that some of the skills aren’t too overpowered, but the game as a whole is looking like a great multiplayer offering. It’s a pure shooter with no qualms about the kind of experience it tries to deliver, and it succeeds thanks to that vision.