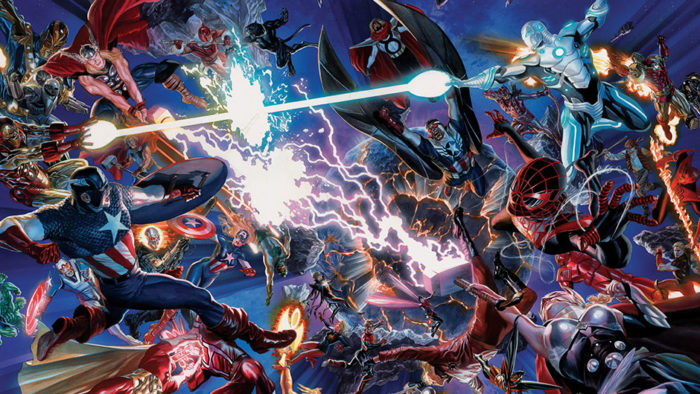 The Injustice series has been doing incredibly well for DC so far. The first game proved that NetherRealm can make quality games with characters outside the Mortal Kombat universe and still create engaging stories. With Injustice 2, DC’s greatest heroes and villains are once again clashing in a fantastic fighting game. But with the success of DC’s fighter, a question has crept into our minds; why hasn’t Marvel given its heroes the same treatment? While our Assistant Editor argued that this wasn’t a good move for Marvel, I can’t help but disagree.

Injustice works so well because it takes a well established licensed property and adapts it in an incredibly faithful manner. The characters are well realized, which appeals to DC comic fans, but the game is also accessible enough that even casual fighting game players can still have fun and see plenty of flashy moves. This faithfulness to the source material and combination of ease of use and depth helped the game succeed in the fighting game community and among comic fans alike. If Marvel could take some of these elements and craft a game around their own characters, they could have the same success.

For years, the only fighting game that Marvel fans could look forward to was a new installment in the Marvel vs. Capcom series. Yes, it’s a deep fighter with fast, flashy combat, but it doesn’t delve into the history of Marvel comics in the same way that Injustice does for DC. But how exactly would a Marvel fighting game work?

In the past, the majority of Marvel’s video game adaptations have been average at best. The company now has a renewed focus on partnering with high-profile studios to make original games featuring its characters. A Spider-Man title by Insomniac games is in development for the PS4, and an Avengers title is currently in the works at Square Enix developer Crystal Dynamic, developers of the new Tomb Raider games. Alongside the comics and the Marvel Cinematic Universe, a game-central universe is beginning.

From the looks of it though, at least with the two confirmed titles, the game universe is going to be inundated with third-person action games. This genre does fit the marvel universe incredibly well but introducing a fighting game earlier rather than later would introduce a wide variety of characters right off the bat. It could also establish stories for the universe going forward.

From what little we’ve seen of Insomniac’s Spider-Man, the game universe is one that is in full swing. Heroes have been active for years and have a well-established past. When DC and WB created Injustice, the only other DC games were those in the Batman Arkham series. Marvel is looking to create a broad lineup of games featuring their characters, and what better way to quickly establish how many of their heroes will be interpreted in video games than to create a roster chock full of them?

The stories they could tell are varied as well. While DC had to craft a story about their heroes coming to blows, Marvel already has the multiple Civil War stories that could be adapted. Turning Civil War II into a video game story would work well. Sure, it wasn’t the strongest narrative, but it would include fantastic new heroes like Miles Morales’ Spider-Man, Ms. Marvel, and even characters like Spider-Gwen. Marvel has been adding so many new characters to the comics that giving some of them more exposure through a game is never a bad idea.

Other possible plots could be the recent Secret Empire, which sees Captain America take command of Hydra and then America. It would be another simple catalyst for heroes fighting heroes. The recent Secret Wars event would also work as it saw universes collide and offered up alternate versions of fan favorite characters, which could only expand the game’s roster.

But what characters would actually be included? Marvel has over 60 years worth of heroes and villains to choose from. Of course, the likes of Spider-Man, Iron Man, The Hulk, Thor, Captain America, Ant-Man, Doctor Strange, and other characters made popular through the films would all be included, but in my opinion, the game would benefit from not sticking too closely to the films. A few rather obscure roster inclusions would help take things to another level. Why not include Adam Warlock or even Agent Venom? The sky’s the limit and the further that limit is pushed, the more fun the game would become.

Fighting games such as these are enticing because they allow players to live out fantasy mashups that were previously only accessible in their imaginations. How would Spider-Man stack up against Groot? Can Iron Man take down She-Hulk? Seeing these battles play out would be enough for many, even without a story tying it all together.

The Marvel universe is at its best when its lineup of wacky characters can unleash their powers and show their true colors. Injustice is so entertaining because not only does it create its own unique aesthetic, it also borrows heavily from the comics to ensure that everything still feels authentic. DC has always produced a darker series of comics, though, so a Marvel fighting game would benefit greatly from leaning into the lighthearted nature of Marvel Comics.

The biggest hurdle a game like this would have to face is how to differentiate itself from Injustice. Creating a 2D fighter about Marvel’s heroes fighting each other will invite comparison. But Injustice’s combat is very similar to that of Mortal Kombat. It’s deliberately paced and incredibly impactful. Every hit reverberates and has a weight to it. A lot of DC’s heroes are heavy hitters, gods among men as the first Injustice’s subtitle points out. Marvel’s combatants aren’t all so strong. Marvel’s heroes are, for the most part, men trying to reach the heights of gods. Yes, many of them have incredible strength that could kill in an instant, but they are also still quite vulnerable. Highlighting their more human side would do wonders for the story. The gameplay itself would need to stand out based on the complexity of the fighting and how fun each character is to control.

Yet, who could develop such a title? Marvel has worked with Capcom in the past to put their characters on the 2D stage, so why not give them the keys to the kingdom once again? Tone down the style of Marvel vs Capcom a tad and remove the gaming characters, and you have a strong base for a Marvel fighting game. You would also have a group of developers that have worked with the properties before. Having a Japanese development team behind the title would also give it a different feel from Injustice.

Regardless, a Marvel fighting game would be a fun foil to the dark alternate reality depicted in Injustice and its sequel. The cast of characters would bring together new and old heroes, drawing on years of Marvel history to create a love letter to the characters and worlds and then letting them beat the snot out of each other.