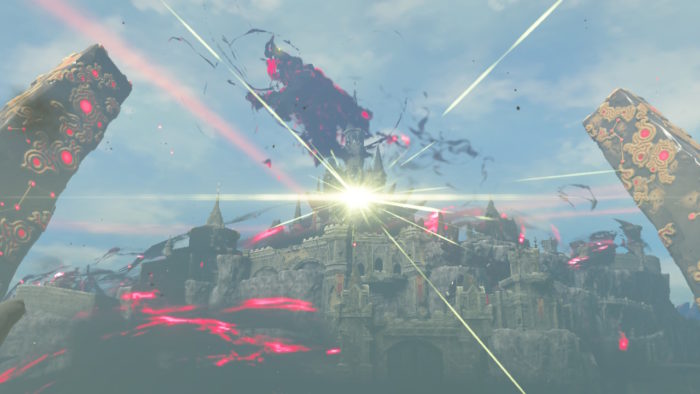 Warning, this feature contains end game STORY SPOILERS for The Legend of Zelda: Breath of the Wild.

Breath of the Wild is able to depart from the conventions known for its series while still feeling quintessentially Zelda at its core. Instead of a linear quest, players can poke around at their own pace in a massively dense open world that encourages exploration. With 120 shrines, 900 Korok seeds, over 70 side quests, four divine beasts, and a beautiful world full with hidden secrets, it’s not hard to spend 100+ hours with this game before even bothering to venture to Hyrule Castle to take on Ganon.

This departure from a forced linear story means that a great deal of what players come to understand as archetypal Zelda had to be tweaked to accommodate a new format. Weapons now deteriorated, you can climb nearly any surface, Link has a dedicated jump button (*gasp*), there are a variety of armor sets, Link has no travel companion like a Navi, Midna, or Fi, and of course this is all housed in a massive open world. During a talk at 2017 GDC, some Breath of the Wild game developers specifically discussed how the latest title was approached with breaking old conventions in mind.

Of course, some conventions players have come to know and love had to stick around too. It’s still Link, the hero of Hyrule, working with Zelda to unite the Courage and Wisdom of the Triforce to defeat the Power of Ganon. Hyrule Castle is predominantly centered in the map, and more dedicated players can find Link’s Hylian Shield, Master Sword, and classic green outfit (by beating all the shrines) to get the old-school Link look.

One Zelda convention, however, persisted in Breath of the Wild when it would have been much more beneficial to scrap it altogether. Those who have played other entries in the Zelda series will note that when you finally defeat Ganon, either the game takes you back to your last save before facing off with him, or just shows you a blank screen after the credits indicating you have completed your task. This makes sense since past titles have been linear, so there really isn’t a huge incentive to return to the world prior to fighting Ganon to continue exploring or gather collectibles.

This couldn’t be more opposite in Breath of the Wild. From the very moment you wake up in the Shrine of Resurrection and hear a crescendo of music as you take in the Great Plateau and rush to get the paraglider, you can make a beeline for Ganon to battle him with your weak three-heart body and cotton-woven “armor.” For every shrine you complete and ounce of strength you gather, that Destroy Ganon task sits at the top of your main quests sidebar, remaining a daunting but exciting final task to take on when you finally feel good and ready.

Once you make it to the castle and defeat Ganon with the help of the four Champions (if you completed the Divine Beasts), you are rewarded with a cutscene of Zelda giving thanks, asking if you remember her, and a bittersweet view of the spirits of the deceased Champions and King of Hyrule as they evaporate from view. If you managed to find all 12 of the optional Captured Memories before you fight Ganon, you unlock an additional, secret ending where Link and Zelda stand atop a hill together and think of a hopeful future where Hyrule will be restored to its future glory, maybe even beyond.

After the story ends on this wonderfully hopeful note, you are transported back to your last autosave directly in front of the castle room wherein you previously fought Ganon. You are free to turn around and return to the world to continue exploring, but as far as the game is concerned, you haven’t defeated Ganon, Zelda wasn’t rescued, and no matter how long you play, the main Destroy Ganon story quest will remain forever uncompleted.

Since the story put so much emphasis on a desire to relieve Zelda of the burden of suppressing Ganon so greatly, it’s pretty dissatisfying to go through the trouble of finally rescuing her only for the effects to never be lasting. For once, Ganon felt much more like a mass of evil energy that needed to be eradicated rather than just a villainous entity. He both figuratively and literally encompasses the castle, making the desire to expel him grow with each passing story you hear about his terror from the Champions, the King, and even certain NPCs scattered around the world. Defeating Ganon should have felt like a century long wait for justice finally coming to a victorious end, and instead it’s a few minutes of open-ended cutscenes and a Groundhog Day reverse back that negates your triumphant win against evil.

Numerous other entries in the Zelda series do this as well. Ocarina of Time, Twilight Princess, Skyward Sword, Wind Waker, A Link Between Worlds, to name a few. In those cases, it’s much more forgivable as ultimately the quest has come to an end and there’s no real reason for you to back track back into the world to explore it further. In Breath of the Wild, the world always seems open to exploring even after defeating Ganon since it is so amazingly jam packed with things to do and see. By robbing the player of the ability to return to a world freed of the plight of Calamity Ganon while continuing the search for every shrine or Korok seed, it feels like a missed opportunity to improve upon these seemingly forced conventions that often just stifle the possibilities of future titles.

Instead, if I may suggest an ending wherein once Ganon is destroyed and the cutscenes roll, Link is placed back into the world with evidence of Ganon being gone evident around him. The strange black and pink mist no longer encapsulates the castle, NPCs start remarking on how Hyrule has become safer and feels better than it ever had and they even begin to venture close to the castle to explore. Enemies of course still exist but are either weaker near or don’t go within towns, stables, and Hyrule Castle anymore, and most importantly Zelda is now safe and free again even if she is just another NPC staying in one location within the castle. To be greedy and ask even more of the ending, imagine that Zelda would then accompany you on your travels as you continue to search for any collectibles you left behind, becoming the Navi/Midna/Fi etc. side-kick with dialogue pertaining to visiting certain areas of the map or encountering certain characters. If you heard that Zelda becomes your travel buddy after beating Calamity Ganon, wouldn’t you rush a little quicker to the castle to save her instead of searching for that 900th Korok seed?

Another wasted opportunity that could be improved upon with a more open ending is an expanding upon the futures and responsibilities of the next generation of Chamption-esque characters. For the Gorons it’s Daruk’s descendant Yunobo, for the Gerudos it’s strongly implied Riju is a descendant of Urbosa, Prince Sidon is brother to Mipha, and Teba is just as sassy and good at flying as the Rito champion Revali. Imagining returning to these characters after defeating Ganon (especially if accompanied with Zelda) and hearing from them how their communities are thriving with the Divine Beasts in order and Calamity Ganon gone. Pretty rewarding, right?

Since Breath of the Wild was fuelled by a desire to move away from some of the conventions Zelda has built around itself as a series, it’s a shame that the “return to last save after boss fight” feature wasn’t adjusted to work better with Breath of the Wild’s amazing open world. There is always a chance that the second, more story-based DLC pack releasing sometime during Holiday 2017 will include some sort of after main quest exposition to make the ending feel more satisfying. But right now we can only hope, and keep fighting Ganon over and over.