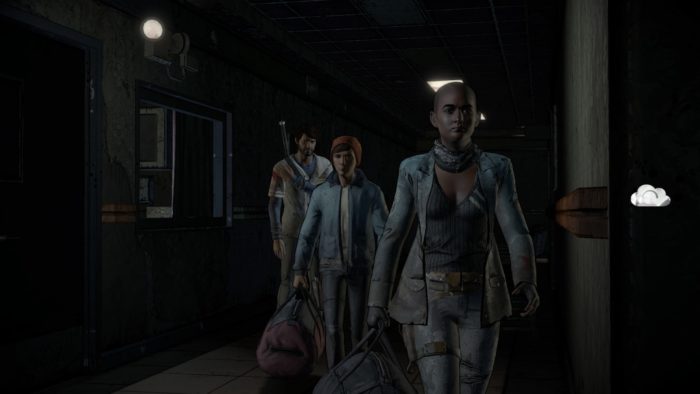 The Walking Dead: A New Frontier Episode 4 on PC

Much like the past couple of episodes in A New Frontier, episode four casts players back into the past. This time around we got another look into exactly how Javi ended up in the position of being the father figure in his brother’s family and the complex relationship between the two brothers. This sets episode four up to continue exploring the character dynamics and relationships that have been a driving force in the series so far. The problem is, it never really delivers.

Let’s get the main problem with episode four out of the way now. The first three of its six chapters following this flashback are the weakest in the series so far. Not because they’re not filled with action, but because they aren’t utilized effectively. Huge group discussions are there for you to listen to and nothing more, and key characters feel far too absent considering their roles thus far (I’m looking at you, Kate). Instead, these chapters, for the most part, have you discussing and completing minor preparatory tasks for the larger plan that your group is formulating, though none of the decisions you’ll make will ultimately change the way things pan out.

Out of episode four’s five major choices, three of those came in the final two chapters and only one of the other choices I made prior to these felt remotely significant. This encapsulates the pacing issue that episode four suffers from. There’s some great stuff in here, but Telltale uses its first few chapters to set up the finale. Had it cut the chaff, episode four could have been a succinct, concise, and more enjoyable episode overall.

Since its beginning, A New Frontier has all been about both blood family and the family you create. Relationships have both blossomed and deteriorated due to our choices, and it’s been enjoyable to have an element of control (at least in Javi’s case) over how these relationships play out. Unfortunately, though, episode four focuses several times on a relationship that feels so forced and filled with awkwardness that I’d rather it was just left to the wayside. Particularly when it includes the very annoying Gabe.

In previous episodes, the teenager has ground my gears, but in Thicker Than Water, Gabe’s teenage angst became even less justified. Though he’s been problematic ever since episode one, there was a particular lack of consistency in his decisions and thought processes that seem far beyond that of said teenage angst. His unconditional loyalty to his father waivers at the strangest of times and with little indication that he’s had such a change of heart. This makes his actions in episode four all the more frustrating and takes away from the story that Telltale Games is weaving, especially when said spontaneity is used as a blatant MacGuffin.

Don’t get me wrong, episode four is not a complete trainwreck. The opening episodes do their job in moving the plot along, but it’s certainly not what I wanted jumping out of the rather hectic ending to episode three. If you make it through these chapters, though, the episode does pick up in its second half. Fans will get some closure on some of the larger questions they’ve been tossing about, the action really ramps up, and chapter six ends up being one massive roller coaster of emotions that delivered a much more powerful close than that of episode three.

As such, I find myself waiting for the finale with mixed feelings. Episode four’s finale has me eager to jump into the finale and face what comes Javi and the group’s way, but I really hope Telltale nails down the pacing for episode five. A slow chapter can be forgiven, but three consecutive bad chapters really weakened an episode that had far more potential. Sure, it’s an investment for the payoff, but its closing moments aren’t enough for the 90 minutes of buildup prior.