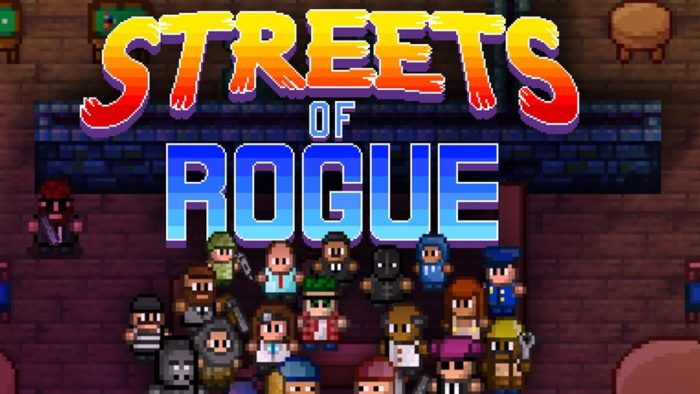 Streets of Rogue on PC

I’ve said time and again that I love seeing games that combine well-established genres into something new. Developer Matt Dabrowski has set out to do this with his Early Access Steam title, Streets of Rogue. As you might guess from the title, this frantic piece of work combines the punch-throwing action of a traditional beat-em-up with the RPG-style elements of a top-down roguelike. The end result is a fast-paced, difficult adventure that pits players against ever-higher challenges as they seek to overthrow a corrupt mayor and restore peace.

Streets of Rogue’s gameplay is pretty much what we’ve come to expect from most roguelike titles in the last few years. Players select their character class from the available options, which can be numerous later as more characters are unlocked. Your class determines basic stats, abilities, and starting loadout. Not to worry, though, as the mean streets are filled with plentiful opportunity to gain levels, gather gear, and otherwise improve your chances at survival. Along the way, you’ll fight, steal, hack, and otherwise disrupt the world on your journey to the top levels of the twisted city in which our tale is told.

As a newly-minted member of “The Resistance,” players are sent to carry out dangerous missions, with each level having two or three required objectives to move on. Additional missions, level events, and various other things to do around town offer a pretty solid way to spend your time. For the most part, your missions are going to come from a set list of possibilities — neutralize a target, free a prisoner, or retrieve an item. This may not seem like much, but depending on how you go about the tasks at hand, there’s plenty of other activity involved, and players will have to think a bit before rushing in to most situations.

As a roguelike, Streets of Rogue keeps faithful to the trials of permanent death. This means that the simplest mistake — such as being spotted by a passing police officer while hacking a nearby computer — can be disastrous. A watchful eye and careful planning make most of the game’s challenges doable, but sometimes brute force is the best or only way to move forward. To that end, there’s a wide variety of weapons for players to make use of, ranging from knives and swords to pistols, shotguns, and even some heavy-duty explosives. A variety of status-affecting items and health-restoring foods round out the bulk of your inventory.

What makes Streets of Rogue entertaining is the fast pace and general freedom to do as you will. Sure, maybe trying to take down the local police station armed with nothing more than your fists isn’t going to end well, but it can be fun to try — and who knows? If you manage to take down one officer, you may just get a chance to grab a weapon that turns the odds in your favor. Not feeling like you can go it alone? Find some cash and hire a gang member as backup! Plenty of other potential followers and ways to accomplish your goals await, and this variety adds a great replay value that can keep things fresh every time.

That replay value is, perhaps, Streets of Rogue’s most coveted feature. As I mentioned, players can expect to die and be sent back to the beginning; this will happen a lot, especially early in your travels, but the randomly-generated floors, long list of character classes, purchasable upgrades, and more mean that every time you start off, you’re going to get a different look than you did before. The only part that seems to feel stale after a few hours with the game is the objectives behind each required mission, as these will repeat, but since you’re able to approach them in new and interesting ways there’s still plenty of fun to be had.

As far as character choices go, players have plentiful options with more opening up as you progress and accomplish certain feats. The soldier is a great go-to for those who favor ranged combat, while the brawlers may get more use out of the powerful yet unintelligible gorilla. Hackers, thieves, and vampires offer unique abilities that allow you to approach things in a more cerebral way, while shopkeepers and bankers will have better opportunity to bring on hired help. The choice, as they say, is yours, though the combat-heavy gameplay does seem to favor classes with at least some prowess in a fight.

Ultimately, Streets of Rogue offers a high-speed experience that’s got plenty of variables and options that keep things interesting and fun. I wouldn’t go so far as saying this is a game for everyone, since the combat-heavy experience does lend itself to certain play styles over others, but it’s fun and easy to pick up and play for a bit. The $14.99 price tag on Steam ($13.49 through March 17) is pretty fair for the content you’ll be getting, and there’s a lot to enjoy. If you’ve been looking for a curious and frenetic genre-hybrid with tons of replay value, Streets of Rogue may be the perfect fit.