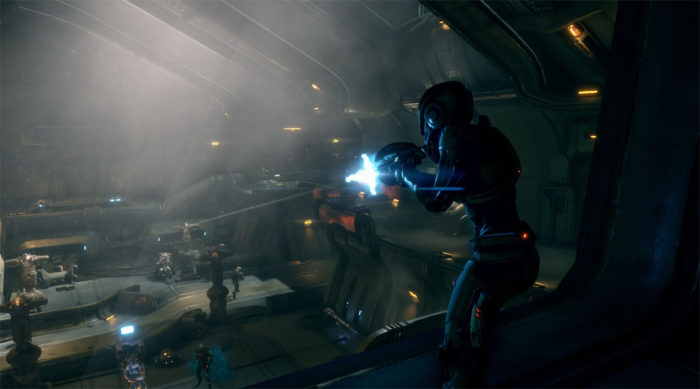 With the news that Mass Effect Andromeda won’t be having a multiplayer beta, PAX East became the last opportunity for fans to go hands-on before the game releases in a couple of weeks (a little earlier with EA access if you have it).

Getting in before the rush, we had an opportunity to go a few rounds with Andromeda’s cooperative survival multiplayer. Despite not playing Mass Effect 3’s multiplayer in a couple of years, it didn’t take very long for me to readjust.

Things started off just as they did in Mass Effect 3. Enemies trickle into a map in increasingly larger and more difficult waves, and it’s up to you and your team to take care of them. Throughout the course of the match, there will be objectives that force you to leave your comfort zone, lest you will fail. This can include reaching terminals around the map or holding down multiple control points.

Various abilities have synergy together just as they have in the past. Biotics can team up to cause explosions and soldiers can take advantage of a pulled/lifted enemy and go to town with a charged up assault rifle, just to name a few examples.

If you get into a sticky situation, you can use consumable items such as first aid and/or ammo packs to keep you going. Survive each round, and you’ll be rewarded with sweet currency to go out and roll the dice on some item packs, or see if anything tickles your fancy in a new store which will have a rotating set of inventory.

If that all sounds familiar, it’s because it definitely is. At a basic and functional level, Mass Effect Andromeda’s multiplayer really isn’t that much different than Mass Effect 3. But honestly, that’s not a bad thing.

Amidst pre-launch criticism of Mass Effect 3 that the multiplayer would detract from the campaign, BioWare proved detractors wrong and delivered a really fun complementary game mode. For some, it kept them playing long after they completed the campaign. There’s no reason that it needed to be overhauled.

Instead, the improvements and changes are more subtle. The most un-subtle of those changes is the addition of the jet pack. Characters can now launch themselves into the air, and zip or strafe around. If you played Halo 5, it’s similar to how the jets worked in that, but it can be used more often and is a valuable offensive tool as well.

Instead of plodding around the map, you can use the jets to quickly close the distance on enemies. As a solider, I was able to drop on top of enemies, blast them with a concussive shot, and then take them out easily. It can, of course, be used defensively as well. You can launch yourself up and away from enemies, or quickly strafe and dodge from enemy attacks.

Andromeda also opts towards giving players a lot more control of fine-tuning the experience they want pre-game. Just as in Mass Effect 3, you can select from three difficulties (Platinum will not be available in Andromeda, at least not right away) and the enemies you want to go against. However, you can also add modifiers that will make your experience more difficult such as increasing your enemies’ shielding or reducing your own. A representative added that while Platinum difficulty isn’t available right away, you can create a modifier set that is effectively as hard as Platinum.

Once the game is out, there will be live daily challenges that make use of these modifiers that players can complete for extra rewards. Couple that with other new features that we already know of such as Prestige XP, Andromeda’s multiplayer component is shaping up to be a beefier, deeper version of its predecessor.

Assuming that people who play Mass Effect like its combat and don’t mind playing a mode that is focused entirely on that over dialogue choices, there’s a lot here to look forward to. If you were into the multiplayer last time, you’re getting a bigger, better, faster version of it. If it wasn’t your thing, there’s at least some new content such as the daily challenges, and non-RNG item shop, which might be worth giving it another shot. These additions address two common complaints for ME3’s multiplayer: that it got repetitive, and opening packs and repeatedly not getting something that you needed got frustrating for some.

You can try for yourself on the show floor of PAX East or when Mass Effect Andromeda releases on March 21.