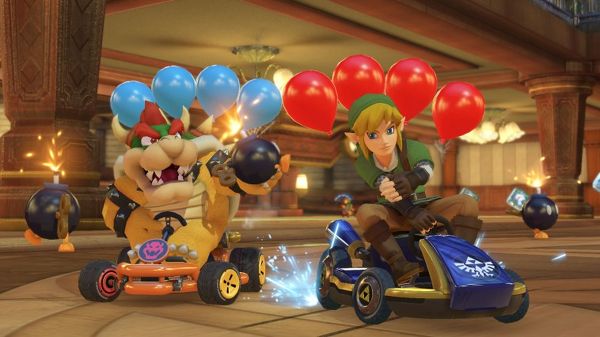 Thanks to low Wii U sales, millions fewer know this than they should, but Mario Kart 8: Deluxe is one of the best games in Nintendo’s excellent Mario Kart franchise. Its mix of fantastic courses, whacky-as-ever power-ups, and customizable karts made for the best Kart game since at least Double Dash, and debatably since Mario Kart 64.

And yet, one key component was missing: battle mode. Oh sure, there was a mode bearing that name, but it was a far cry from the simple but engrossing battle mode of Mario Karts past. About three years later, Nintendo is finally getting around to remedying this gross negligence, as the forthcoming re-release Mario Kart 8: Deluxe has a proper battle mode, and it’s every bit as fun as you remember the classic mode being.

In fact, the few matches I played felt exactly like the Mario Kart 64 iteration with (obviously) better visuals, more balloons, and more weapon options. This is not a bad thing, as Kart 64 pretty much nailed the formula, with the only things it could have benefited from having been more courses, more racers, more karts, more weapons and — well, just more of everything Nintendo can give us.

I only got the chance to do battle on one course, though I was told there will be five more in the final game. When I asked for confirmation that this meant there would be six courses, however, the representative said she was unsure what the final number would be.

Six or more courses would of course be preferable, but even if it only ships with, say, four like Mario Kart 64 and Super Mario Kart before it did, there’s still going to be a lot to love here. Players start with a robust five balloons floating above their karts and, naturally, proceed to toss turtle shells, bombs, bananas, etc. at their opponents to drain them of balloons while guarding their own.

This was a particularly difficult task while playing in split-screen with seven other karts zipping around the Splatoon-themed stage and attacking from unseen angles. That does give me a bit of pause when thinking about just how much fun Mario Kart 8: Deluxe can be in local multiplayer while playing in portable mode on one Switch screen.

Doubtless, players are going to get pissed when red shells fly in from parts unknown off the screen to drain them of their precious balloons. The but the belief here, however, is that the sheer ridiculous joy of battle mode’s core premise will be attractive enough to make Mario Kart 8: Deluxe the first option for anyone wondering what to play on their Switch while on the run.