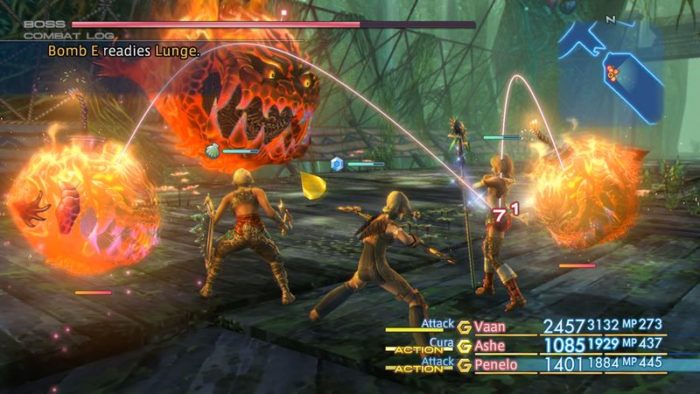 So full disclosure going into this preview of Final Fantasy XII: The Zodiac Age: I hated Final Fantasy XII. I’m pretty sure there is a disappointed user review somewhere on Metacritic written by pre-writer me, that clearly lays out my disdain for the game.

I fully understand that I am the minority. Lots of people liked Final Fantasy XII, including our EiC Sharon Coone, who adores it. However, after playing Final Fantasy XI so much prior to the release of XII, I could not shake the feeling that I was playing its offline, less social version.

I just wanted put that out there though. I promise this post isn’t about digging up decade old complaints. In fact, after playing The Zodiac Age at PAX East today, I’m here to say nice things about the game.

Final Fantasy XII The Zodiac Age is pretty much the same Final Fantasy XII you remember, but just based on the international version released in Japan. That version of the game added a lot of new content that you can see here if you want.

The major, and most obvious, addition for The Zodiac Age is the HD facelift that it gets. My hands-on time was brief, but I didn’t need to play long to see how pretty the game is. It looks like a PlayStation 3 era title (and I mean that as a compliment considering it was a PS2 game), and the difference between it and the original version is very noticeable.

If you loved everything about the original, the HD upgrade plus the international versions’ features will probably make The Zodiac Age worth picking up when it comes out, assuming nothing winds up being broken upon release. Given Square Enix’s track record with the successful Final Fantasy X and X-2 remasters, you probably won’t have anything to worry about. That’s really all there is to say as of right now, from the perspective of someone who liked the original. If you want to play through it again, you’re going to be all set.

Now, if you’re like me and disliked the game, then it’s a little more complicated. The international version is a beefy upgrade to that does add a lot of new content, including the Zodiac Job System. If the battle system is what bothered you, it’s worth checking out that long list of differences to see if what you didn’t like is addressed in some way.

If Vaan and the story doesn’t do it for you, then you’re mostly out of luck. Other than some minor changes and additional content, there’s nothing new enough that is going to sway you to suddenly care where you didn’t before.

For me, aside from the HD facelift, the best change is the additional of a hyper speed fast forward option. I could forgive the combat for not being my favorite, and same goes with the story. It wasn’t bad, and I could have pushed through if it wasn’t for the huge areas and meaningless battles that slowed me down from point A to point B. Boss battles in XII were challenging and thrilling, but random battles were anything but that. The Zodiac Age will feature to fast forward options that increases the speed of everything by 2X and 4X… and it’s awesome.

I was able to fly through areas during the demo that would been a complete slog in the original. Don’t get me wrong, I like taking in the scenery and enjoying myself as much as the next guy, but if I’m just trying to revisit and do a hunt or something, I don’t want to have to constantly flee or stop to fight everything. Now, I can still kill and get the EXP, but not have to sit there through a full fight with a random enemy where the outcome is obvious.

This was a major pain point for me when I last gave Final Fantasy XII a playthrough. With that addressed, and the fantastic looking HD upgrade and international version improvements thrown in, The Zodiac Age is really shaping up to be a worthwhile, definitive edition of the game. It will certainly be a treat for fans, and something that could even convert haters like myself when it releases July 4.