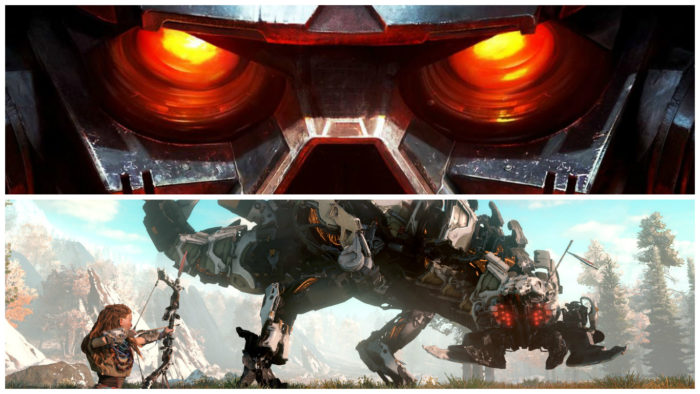 Horizon Zero Dawn, Guerrilla Games’ first release outside of the Killzone series since Shellshock: Nam ’67 in 2004, represents a huge change for the Sony first-party studio. Six Killzone games, five of which were developed by Guerrilla, have been released over two consoles and two handhelds since 2004. The shooter series is what we know the studio for and Sony always seemed to hold it in high regard, repeatedly pushing it as the primary shooter on PlayStation and as one of the system’s main exclusives.

The Killzone series has been generally well received, with the review scores peaking with Killzone 2, which is at 91 out of 100 on Metacritic, making it the only one of the six titles to be rated higher than Horizon Zero Dawn. However, the critical reception of the series began to fall off after the 2009 title Shadow Fall, currently standing at 73 on Metacritic. That isn’t to say that Killzone isn’t popular. The latest entry reportedly sold 2.1 million copies by the end of January 2014, which shows that it performed very well, especially considering that the install base was the lowest it could be at the time of release. That figure is likely far higher now, since that was revealed just three months after the PlayStation 4 was launched. However, many people, including fans of the Killzone series, thought that it would be smart for Guerrilla to move away from the series and to test themselves with something entirely different.

Horizon is now out and it couldn’t be much more of a departure from the grey, linear experience that was Killzone. As we said in our review, “Its magical world is a wonder to explore, it controls and looks exceptional, and the unique, modular build of its enemies ensures that combat never gets old.” Gone are the drab corridors of the PlayStation 3 Killzone games and the menacing but easy to manipulate Helghast enemies. Horizon presents a lush, vibrant world that is begging to be explored. There are also countless more systems at work in Horizon. As an open world RPG, there is a crafting system, dialogue choices, secrets to be uncovered, and varied landscapes, very little of which was present in the Killzone games. It is wonderful to see a developer, one that we already knew was great, test themselves with something new and prove themselves to be one of the best. Sticking with Horizon in the future could be a chance for Guerrilla to continue improving and develop the world even more than they have already done so.

Now is also the perfect time for Sony to introduce a new flagship franchise that will become synonymous with the console for years to come. Uncharted 4: A Thief’s End was released almost a year ago and is understood to be the end of the series, for now at least. With Kratos returning soon, Sackboy losing appeal since the underwhelming LittleBigPlanet 3, and many others also on hiatus, Aloy could become the next face of PlayStation. There has been rumors that Sony are planning on supporting and marketing Horizon in ways that will keep it in the minds of PlayStation fans whenever some big news breaks. That intent from the developer and publisher, coupled with the overwhelming critical praise the game has received, makes it seems pretty obvious that Horizon is something we’ll see return relatively soon.

Also, in the few days since Horizon’s release, the buzz has been huge and it looks like it will be a commercial success for Sony, which is something that will certainly push them to continue the series however they can. Not that that would be difficult with the game’s deep story having an incredible amount of potential. Should Horizon continue to be a hit with fans, the series is surely going to continue telling stories about its unique world. That could even be before the end of the current console generation. Guerrilla already has the engine in their hands and the elements that make up Horizon’s beautiful world have been created, so the development process should be much quicker than it would be when creating a new entry.

That same argument could be used for Killzone, however. Although Shadow Fall was a PlayStation 4 launch title, it is still one of the best looking games on the console and since the studio is so familiar with the world and the game’s structure, developing a new Killzone game in the same engine as the last wouldn’t take as long as a new Horizon. The developers themselves certainly haven’t shut the door on the shooter series. Speaking to Game Informer late last year, Horizon’s director Herman Hulst said, “Killzone is very key and very core to Guerrilla. We have a lot of love for the franchise. In a way it’s conclusive, but at the same time we’ll leave everything open for the future. Who am I to say we’ll never do anything?”

Before the studio was closed in January, I expected for Killzone duties to be transferred to Guerrilla Cambridge. They had finished development on and released PlayStation VR exclusive R.I.G.S, had not announced their next project, and have experience with the series after developing Killzone: Mercenary. They proved themselves to be a more than competent studio that was more able to create a game of the stature of Killzone, so it is a shame that this was not seen as a viable option. Maybe Sony felt that it was time to give players a break from Killzone, or maybe they realized that it wasn’t going to be the Call of Duty rival they hoped it would be, so they thought it would be best to focus solely on Horizon. Unfortunately, Sony’s thought process on this is something we are unlikely to ever know. The other possibility, if Guerrilla intends to continue with the Killzone franchise, is to split up their team. One could work on support for a Horizon sequel while the other works on another Killzone game. That may not be something that the studio wants to do but it is certainly a possibility.

For now, it seems unlikely that we will see another Killzone game any time soon and that is probably a good thing. Horizon Zero Dawn is such a leap forward for Guerrilla that it seems impossible that they would consider going back to linear shooters. However, Killzone has a dedicated and passionate fan base that would undoubtedly love to see another story in its world. What Horizon does, however, is show off the talent at Guerrilla and it is a game that has the potential to be Sony’s next big thing, which is something we knew Killzone was unlikely to ever be. Horizon Zero Dawn is a wonderful game that promises to be a big part of PlayStation’s future and I can’t wait to see what Guerrilla has in store for it as a series, even if that means we never see another new Killzone game.