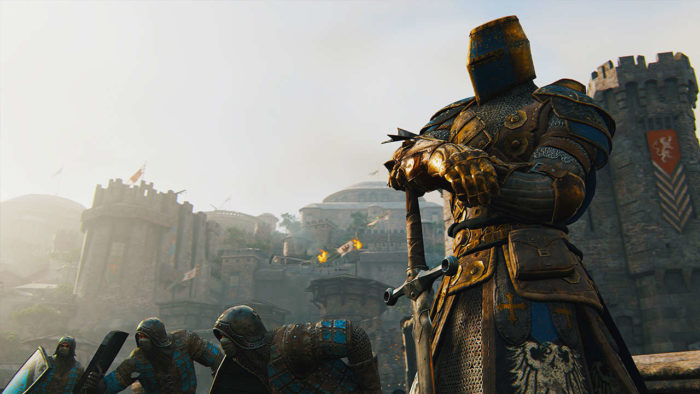 For Honor on PS4

It’s not every day that a new IP comes along from a major publisher, especially one with as clear a vision as For Honor. Let’s make one thing certain, For Honor stands apart from anything else I’ve ever played, and it takes some getting used to. However, once you adapt to its controls and systems, you’ll find a game that’s surprisingly deep, complex, and enjoyable.

For Honor takes place in a kind of pseudo-Earth inhabited by three factions of warrior civilizations – The Chosen, The Warborn, and the Blackstone Legion – which designate the Samurai, Vikings, and Knights, respectively. At the start of the game, players will permanently align themselves with one of these clans. This doesn’t affect which characters you play as, only which side you accrue points for in the online, cross-platform metagame called “The Faction War.” By assigning points to different territories of battle, players try to push their faction to victory across different rounds in a season. The winning faction at the end of a season will reap the spoils of war.

The core gameplay of For Honor is where the title shines, its emphasis placed on melee duels. There’s a deep, mechanical system to learn here that’s pleasingly cinematic and easy enough to pick up and play. Combat is brutal and tactile, forcing you to keep your eyes glued to your opponent at every second, sometimes leaving you hopeless, gambling to predict what their next move will be. In the midst of battling reinforcements on a bloody battlefield, you’ll drop your character into a focused combat mode and lock onto an enemy — this tense space is where you’ll be spending the majority of your time. Here the right stick controls your guard, with three different stances available, up, left, and right. You’ll need to match your guard to that of your opponent’s swings in order to block attacks.

Your controller constantly shakes from the vibration; you feel the weight of each and every blow as the dull thuds and clangs of steel ring out. Facing an enemy down, your adrenaline convinces you that you’re battling for your life. Each and every foe you vanquish is equal parts triumphant and exhausting, knowing that you have to move your battered warrior to the next heart-pounding encounter.

It’s easy enough to hold your own in battle just by blocking and attacking, but from there things get much more complex. Every fighter has a light and heavy attack, but warriors also wield unique movesets, combos, and perks. It takes patience, practice, and cunning to effectively use the characters you want to play as, learning how each interacts with combat options like feints, Guard Breaks, and deflections.

Despite having the same basic skillsets, each hero plays incredibly differently, with their strengths and weaknesses clearly defined. The Orochi, for example, is fast and agile, but seriously lacks in defense. Meanwhile, the Conqueror is a veritable wall with high defense, but lacks speed and attack power. You can also customize each hero substantially, unlocking gear that adds various stat bonuses and boosts, altering their look, executions, and emotes. There’s also a perk system known as Feats that give you bonuses in battle. There’s a fair amount of variation between all these parts, adding layers of strategy as you personalize your playstyle.

Duels are one of the multiplayer modes available, pitting warriors against each other, or in teams of two as a Brawl. The Deathmatch category has two different modes, Skirmish and Elimination. Skirmish is a more open battle, giving players infinite respawns and the goal of capping a point first. Elimination, on the other hand, has four players squaring off one-on-one. If you win your duel, you can go help your allies. You can also try and run away immediately, but risk getting stabbed in the back by your opponent.

Dominion is the final mode, and probably the biggest focus for multiplayer. Here teams of four fight over three different control zones, with an army of soldiers clashing in the middle. This is where the many elements of For Honor join together, with dueling, Feats, and more all coming into play. There’s some light hack-and-slashing as you mow down small enemy soldiers to help capture a point, but you will need to watch for the other team’s warriors all the while.

Dominion can definitely be hectic and overwhelming if you’re bombarded by enemy combatants, especially with the size of battles, but it’s honestly where I had the most fun with the game. Teamwork is key, and you need to be aware of how the battlefield is shifting at all times, as well as figure out how you can make a difference on it. Maybe that means jumping into the thick of it against three enemy players, or trying to sneak around the back and quietly capture a point.

For as good as the combat usually is in For Honor, bringing multiple players into the mix can muddy the experience up a bit. Taking on more than one character at any given time is seriously challenging, and you’re doomed if your team isn’t effectively working together. Without coordination, the experience can feel exasperating and even unfair. It definitely makes battling with a group of friends the best way to play For Honor.

On top of this, there are some balancing issues with the game, though they can no doubt be patched and improved moving forward. Currently, going up against the humongous Shugoki as a light character is overly difficult, and nimble characters, the Orochi in particular, seem to always come out on top. Players can also use real money to purchase Steel, used to unlock better perks or better equipment. This won’t completely tip the odds, as any player still needs skill, but those heavily investing in the microtransaction system can be quite frustrating on the battlefield nonetheless.

Although multiplayer is the big focus of the game, there’s a surprisingly engaging campaign that really shouldn’t be missed. The story chronicles the events that lead up to the faction war that multiplayer takes place in, and how a woman named Apollyon caused everything. She’s ruthless, unpredictable, and ceaselessly craves war. Her motivations are simple and understandable at least, even if they’re a little unhinged.

There are three chapters, one for each faction, and a number of missions in each. Along the way you’ll play as every character class at least once, providing a good introduction to the classes, along with characters that all have dialogue and well thought out personalities representing their individual code of honor or beliefs.

For Honor isn’t going to win any awards with its dialogue or writing, but the story is surprisingly fun, in a campy action movie kind of way. Characters almost feel like intentional caricatures that roll with the punches, no matter how ridiculous things get. I found myself enjoying every step, and ready to see what great battle or task awaited me in the next mission. While the core combat can get a little monotonous in the campaign with the amount of enemies thrown at you, there are some interesting twists on gameplay that keep things interesting.

Despite being a game about gritty and brutal battles, For Honor is one gorgeous experience. Combat is taking place on lush battlefields — dense forests, snowy mountain villages, and grand castles — as intricately detailed as the armor and design of the main characters. Combat animations are fluid and convincing, and the title runs without almost any kind of visual hitch, even when things get incredibly hectic.

For Honor is definitely a demanding experience, one that holds your attention at every second and demands you master its systems. There were many times I found myself dejected and completely dominated by other players, which then in turn encouraged me to better learn certain classes. It most certainly won’t be for everyone, as to really feel rewarded by the game you have to invest in it, and the larger battles online can be incredibly disheartening if don’t have a team that works together. Even so, it’s a title with a well-defined identity that doesn’t need to take itself seriously at every turn.

For Honor tries something new, and ultimately succeeds much more than it fails. With its surprisingly fun campaign, intense and challenging gameplay, and varied multiplayer, there’s plenty to keep you busy. There are balancing issues I sincerely hope get worked on, but for now, For Honor is a unique experience well worth your time, and could be the start of a daring new franchise.