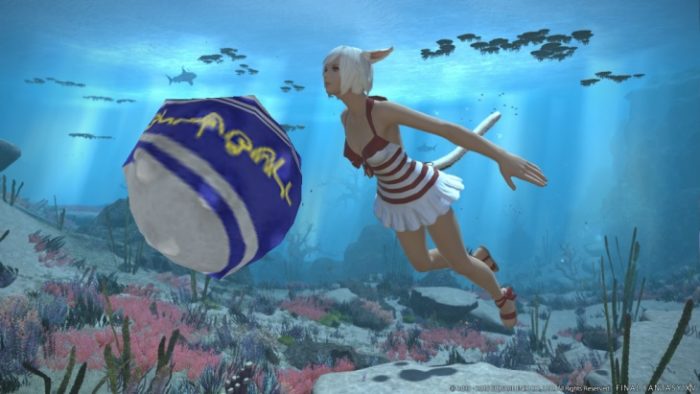 At the Final Fantasy XIV Fan Festival this weekend, a lot of information was revealed for the game’s newest expansion, Stormblood. On top of the confirmation of Samurai (finally) and a look at new areas and beast tribes to expect, it seems FFXIV may be taking more from Final Fantasy X than just Auron’s sweet sense of style. The game’s famed director, Naoki Yoshida (or Yoshi-P) answered a few questions the fans had about Stormblood and one of the questions was directly about a fan favorite water sport from FFX, Blitzball.

With Stormblood seeing the introduction of player swimming and undersea adventures, it was only a matter of time before questions regarding Blitzball would surface. When asked about it possibly being added into the game, Yoshi-P answered by saying that he and the team have thought about it and would like to add it in. However, he also mentioned that it would most likely look very different from its original form in FFX by saying “There’s the opinion that if we released Blitzball as it was in Final Fantasy X that players may lose interest in it quickly. And then on the team we’ve had the idea that since we’re an MMO that maybe we should make a MMO specific version of Blitzball.”

It isn’t clear exactly what he means by an “MMO specific version,” but it seems as though it is going to take some work to fit it into the game and fans will, most likely, not be seeing it for some time. It is nice to know that the team is looking into adding very different styles of content and if done correctly, Blitzball in FFXIV could very easily be incredibly fun. So cross your fingers, get your Tidus glamours ready and when it gets released (because we like to be positive here) be prepared to Blitz!

What do you think about Blitzball maybe being added to FFXIV: Stormblood? Leave a comment and let us know!